Back in October (2016) in my post "Plans for My American Fleet" http://volsminiatures.blogspot.com/2016/10/plans-for-my-american-fleet.html, I included plans for the USS Chesapeake, a ship no one seems to manufacture for some reason. Its famous foe HMS Shannon is easy to find, but not Chesapeake.

(Much of the following paragraph is paraphrased from Osprey's "American Light and Medium Frigates 1794-1836".)
One of the original six frigates designed by Humphreys, it was the last to be built. After the Quasi-War with France, Congress re-evaluated the large frigate design. The Navy let Josiah Fox redesign the sixth frigate authorized in 1794, Chesapeake, more along the lines of the European frigates. The result was much smaller than Humphrey's 44's - at 152'6" long with a beam of 40' it was even shorter and shallower than Humphrey's 36 gun frigates. It was redesigned to carry a main battery of 28 x 18 pdr guns, with 16 x 9 pdr guns on the upper works. The ship reemphasized the forecastle and quarterdeck, the spar deck over the waist was lighter than those on Humphrey's frigates. Fox followed up with designing and building the Philadelphia. It was slightly longer at 157' but narrower at 39', and displaced less tonnage than Chesapeake. Both ships were intended as 44 gun frigates and were carried on the US Navy lists as 44's through 1807. Chesapeake was the flagship of the Mediterranean Squadron in 1802-03, and was again sailing to the Mediterranean in 1807 at the time of the HMS Leopard Affair. Chesapeake was laid up in ordinary at the end of 1807 and reappeared on the Navy list as a 36 gun frigate in 1812. I won't go into the details of the Leopard Affair or her fateful meeting with HMS Shannon which can be easily Googled.

At the time of Chesapeake's meeting with Shannon her armament was as follows: 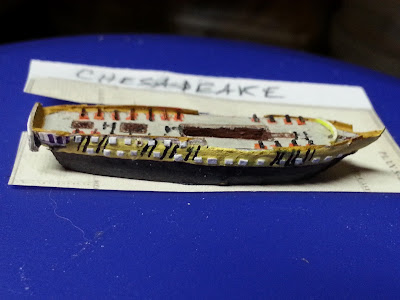 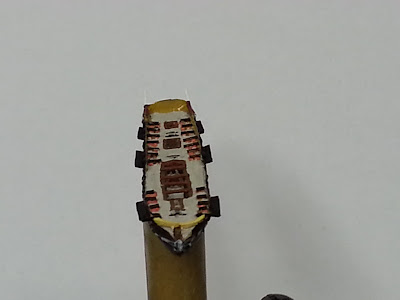 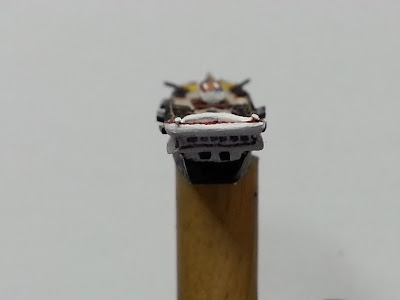 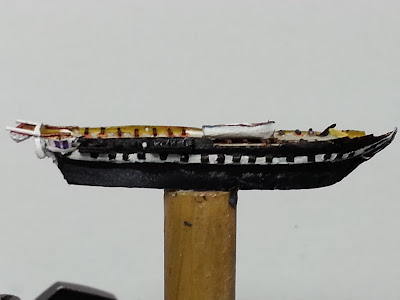 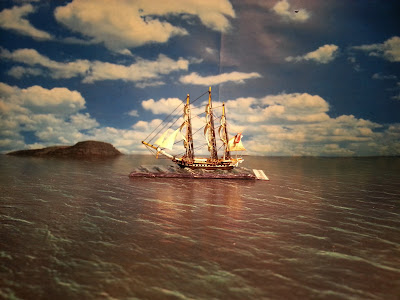 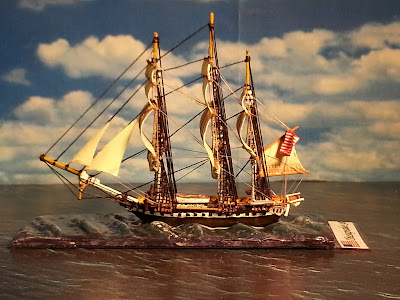 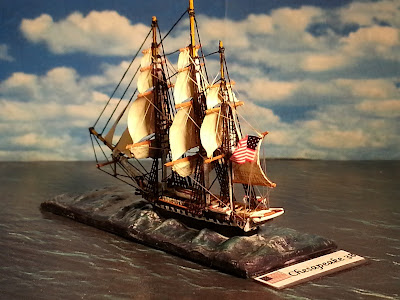 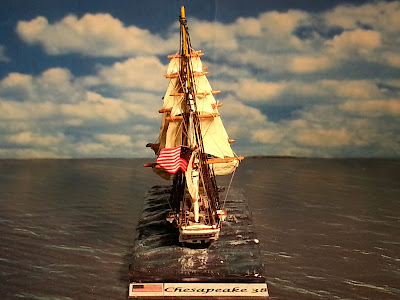 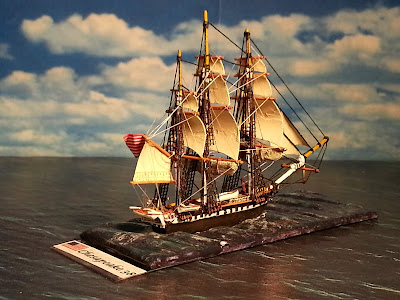 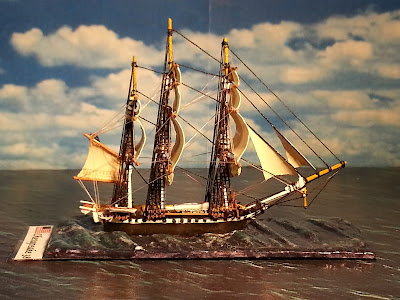 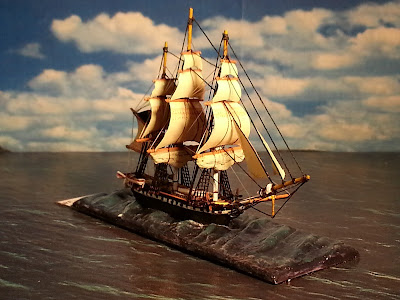 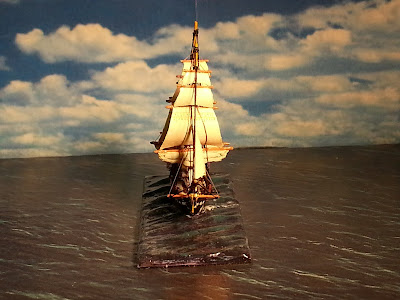 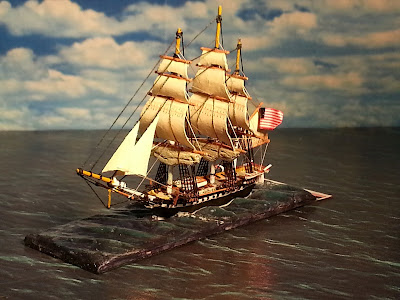 I hope anyone viewing this has enjoyed the post. I enjoyed sharing it. I did not include a lot of construction detail, as my methods have been covered in previous posts and can be easily found using the "How To" label search tag on this Blog. Any additional questions I will be happy to try to answer.
Ah....can anyone spot the glaring error I made? (I hope you only find the one.)
Posted by A Miniatures Hobby Room at 1:48 PM

Email ThisBlogThis!Share to TwitterShare to FacebookShare to Pinterest
Labels: 1:1200, Barbary Wars, How to, Napoleonic Naval, Scratch Built, The Ship Yard, War of 1812

Thanks James, it was fun to build. I have started two more: 20-gun Massachusetts privateer Rattlesnake, and the 24-gun Continental frigate Raleigh.
Loved your French frigate.

This is a modelling subject that my late Father would have loved. He spent his free time putting boats in bottles and he was always complimentary of similar models.

Keep up the great work.

Thanks Tony. I would have liked to talk to your dad. Regards,

An excellent blog post. Thank you for sharing it with us.

Thank you Roy for all of the +1's you have given several of my posts.

Excellent blog, excellent work. When I sometimes get frustrated with 'small stuff', I visit your blog and sanity returns ;)

Thanks John, but you have no idea how much insanity is involved by the time I can post any of these 😲

Well, I just went to your AOS Model site so I guess you do have a better notion of what's involved than I do! Amazing work you do John.

The Art of Age of Sail said...

Vol, Outstanding job on the USS Chesapeake! Using the deck plans to build the model was very clever and I applaud your attention to detail. I have done some scratch building on some 1/285th scale aircraft that included adding struts to them and other models that didn't come with them so I know how tediousness work can be. You have me thinking of doing the same thing with some of my ship minis. Keep up the great work and posts. Vince