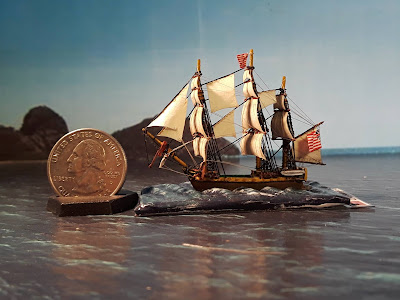 CNS Raleigh was one of 13 ships that the Continental Congress authorized for the Continental Navy in 1775. Built by James Hackett, the keel was laid on March 21, 1776 at the shipyard of John Langdon on what is now Badger's Island in Kittery, Maine. She was launched on May 21, 1776. Raleigh put to sea under Captain Thomas Thompson, who also supervised her construction, on August 12, 1777. She then joined the frigate Alfred and sailed for France. Three days out they captured a schooner carrying counterfeit Massachusetts money. Burning the schooner and her cargo, except for samples, the frigates continued on to France. On September 2 they captured the British brig Nancy and from her they obtained the signals of the convoy which the brig had been escorting from the rear. Giving chase the Americans closed on the convoy on September 4, 1777.
Raleigh, making use of the captured signals, intercepted the convoy and engaged HMS Druid. In the ensuing battle she damaged Druid, but the approach of the remaining British escorts forced her to retire.
On December 29, 1777, Raleigh and Alfred, having taken on military stores, set sail from L'Orient, France, following a course that took them along the coast of Africa. After capturing a British vessel off Senegal, Raleigh crossed the Atlantic to the West Indies. On March 9, 1778, in the Lesser Antilles, Alfred, some distance from Raleigh, was captured by the British ships HMS Ariadne and HMS Ceres. Raleigh, unable to reach Alfred in time to assist her, continued north and returned to New England early in April 1778.
Accused of cowardice and dereliction of duty for not aiding Alfred, Captain Thompson was suspended soon after reaching port. On May 30, 1778 the Marine Committee appointed John Barry to replace him as captain.
Barry arrived in Boston to assume command on June 24 only to find his ship without a crew or stores and the Navy Board not wholly in support of the manner of his appointment. His reputation and character however, neutralized the ill-will of the Navy Board, drew enlistments, and helped to obtain the stores.
On September 25, Raleigh sailed for Portsmouth, New Hampshire with a brig and a sloop under convoy. Six hours later, two strange sails were sighted. After identification of the ships as British, the merchant vessels were ordered back to port. Raleigh drew off the enemy. Through that day and the next, he enemy ships HMS Unicorn and HMS Experiment pursued Raleigh. In late afternoon on the 27th the leading British ship closed with her. A 7 hour running battle followed, much of the time in close action. About midnight the enemy hauled off and Barry prepared to conceal his ship among the islands of Penobscot Bay.
The enemy however, again pressed the battle. As Raleigh opened fire, Barry ordered a coarse toward land. Raleigh soon grounded on Wooden Ball Island, part of Matinicus. The British hauled off but continued the fight for a while, then anchored. Barry ordered the crew ashore to continue the fight and to burn Raleigh. A large party, including Barry, made it to shore. One boat was ordered back to Raleigh to take off the remainder of the crew and destroy her. But the British again fired on the ship, and a midshipman struck the Continental colors. All three ships had been damaged, Unicorn particularly so. Of the Americans ashore, a few were captured on the island but the remainder, including Barry, made it back to Boston on October 7. The British re-floated the ship and she was taken into the Royal Navy as HMS Raleigh. (Paraphrased from historycentral.com)

First off ignore the error on the plan I printed out. I have no idea how I got 24 guns for this ship. It is a 32 gun ship for shore and has the ports to prove it! I was transferring so many plans back then I probably got it mixed up with some other ship. 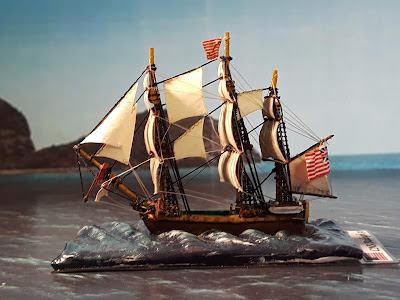 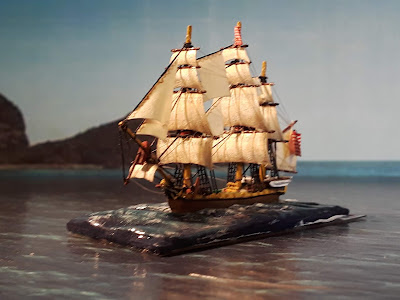 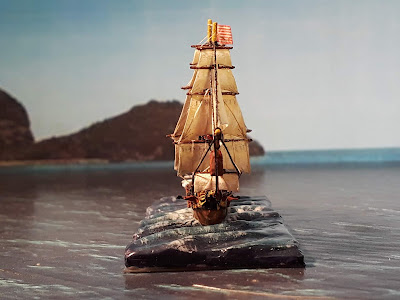 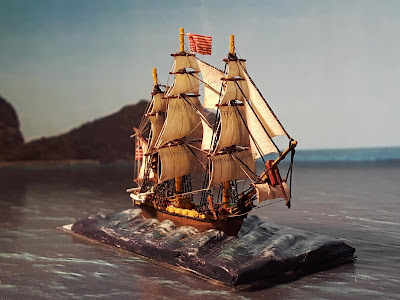 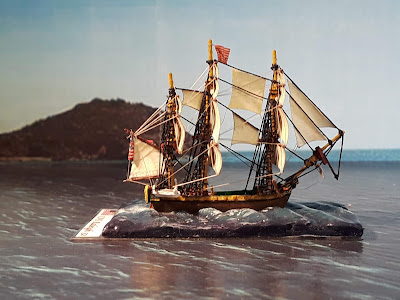 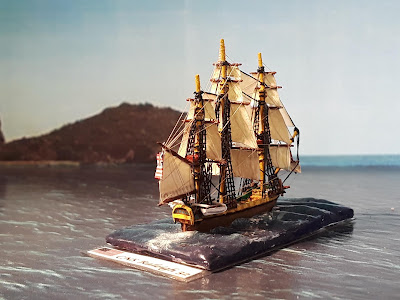 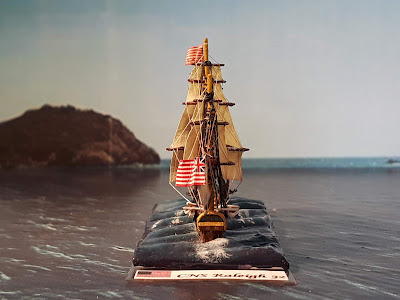 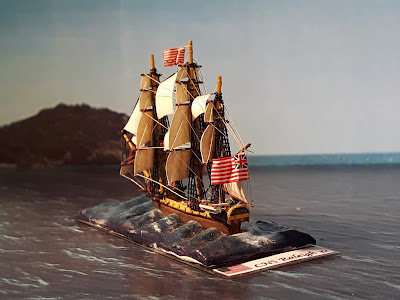 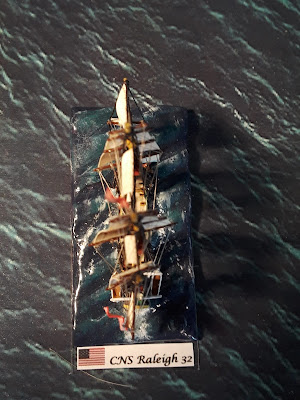 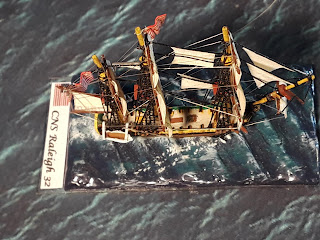 https://www.historycentral.com/navy/frigate/RaleighI.html
Posted by A Miniatures Hobby Room at 7:59 PM

Email ThisBlogThis!Share to TwitterShare to FacebookShare to Pinterest
Labels: 1:1200, AWI Naval, How to, Scratch Built, The Ship Yard

Thank you Jonathan, how are you faring over on the east side?

So many details to enjoy in a so little, and so beautiful ship!

I can’t imagine me building a ship from scratch. Excellent job! I love the stay sails (I think that’s what they’re called).
Find TP yet? 😀

Wow Vol, very impressive! A great looking model, and I enjoyed reading about the ship.

Haha, yes we have TP, and no bananas!
And thanks

Thanks James. These scratch builds are time consuming but fun to do.