This is another one of the GHQ #132 Temeraire hulls. This one is modeled as the French third rate ship Redoubtable. The paint scheme I used comes from the Langton Guide book example #7 on page 25: Quarterdeck gunwale stripe charcoal; upper deck stripe flat red; lower deck stripe black; basalt gray strakes; black hull.

(History paraphrased from The Ships of Trafalgar by Peter Goodwin)
By virtue of her association with the Victory and the death of Lord Nelson, Redoubtable is perhaps the most acclaimed French ship to fight at the battle of Trafalgar. Designed by Jacques Noel Sane and launched at Brest in 1790, Redoubtable was the third oldest ship in Villeneuve's fleet.
In 1795 she took part in the Isle de Groix action on June 23 where the British took three prizes. On 15 December, 1796 Redoubtable sailed from Brest for Ireland with a large fleet of 44 warships and transports with 18,000 troops commanded by General Hoche, The intention was to land these forces and incite rebellion in Ireland, The expedition failed and Redoubtable, with Indomptable, Fogueux, Mucius, and Patriote returned to Brest on 1 January 1797.

Redoubtable did not join Villeneuve's combined fleet until it entered Ferrol on August 1, 1805. Eight days later she sailed with the squadron and entered Cadiz on August 20. The combined fleet sailed from Cadiz on 19 October. At 7 a.m. on the 21st VIlleneuve ordered the fleet to wear together and come to a starboard tack back towards Cadiz. Redoubtable's position was now 13th in line from the head of Villeneuve's line. Ahead of her starboard bow was Neptune (84), astern San Leandro (74), and just off her starboard quarter, the frigate Hortense (40).  When the battle opened Redoubtable's gunners concentrated their fire upon Victory as she made her approach. As Neptune veered off to leeward causing a large gap to open behind Villeneuve's flagship, Captain Lucas directed Redoubtable to move up to close the gap and prevent Victory from breaking through. In doing so her flying jib boom ran over Bucentaure's taffrail. Regardless Victory drove through, firing a devastating broadside through Bucentaure's stern and at the same time running aboard Redoubtable on her larboard bow. It was now about 1:10 p.m. and locked in combat the two ships drifted leeward. To prevent boarding through the lower deck, Captain Lucas ordered the lower gun deck port lids closed. He then concentrated fire into Victory  from his main deck guns. This, supported by a hail of musketry fire from Redoubtable's fore, main and mizzen tops took out most of Victory's upper deck guns. Besides showering Victory's deck with grenades, 200 in all, Lucas had brass cohorns mounted in his tops which, loaded with grape, inflicted high casualties within the British ship. At about 1:25 one of the sharpshooters stationed in Redoubtable's mizzen tops shot Lord Nelson from a distance of only 15 yards. Mortally wounded the Admiral was taken below decks. The unrelenting fire from Redoubtable killed most of those remaining on Victory's open decks. Victory's higher sides proved problematic to Redoubtable's boarding crews. Lucas ordered the main yard to be lowered to form a bridge for his men to cross. It was now about 1:40 p.m. and as his men massed themselves for a second boarding attempt, they received a murderous fire of grapeshot from the upper deck carronades of the Temeraire drawing up on Redoubtable's starboard side. More than two hundred crew were killed. Lucas sent the remainder back below to re-man the guns and engage Temeraire. Lucas tenaciously continued to fight the Temeraire to starboard and Victory, using whatever guns remained. Redoubtable's main and mizzen masts had gone by the board and fires had broken out on her bowsprit and forecastle. She was further hampered when Temeraire's main mast fell across her deck. Victory's gunners had depressed their guns to prevent firing through Redoubtable and hitting Temeraire. This fire ripped her lower gun and orlop decks to pieces. Out gunned by two three deck ships, Lucas struck his colours at 2:30 p.m. Of her 643 complement, there were 300 dead and 222 badly wounded among whom were all the senior and ten junior officers. Under tow during the storm on the 22nd, she started taking on water. The prize crew signaled distress and were taken off, with most of the prisoners that were mobile, by boats from HMS Swiftsure. At 10:13 Redoubtable went down with all of the wounded on board. Of the total compliment, 169 survived. 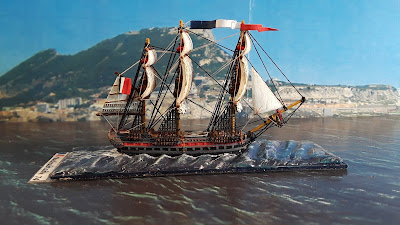 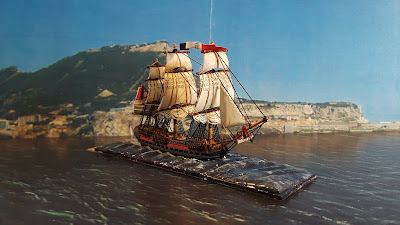 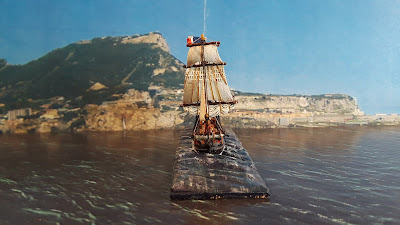 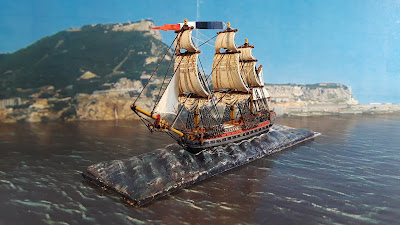 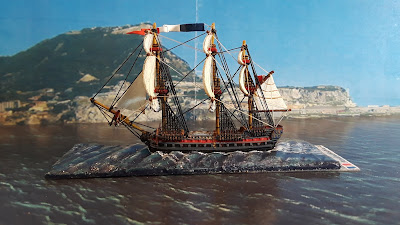 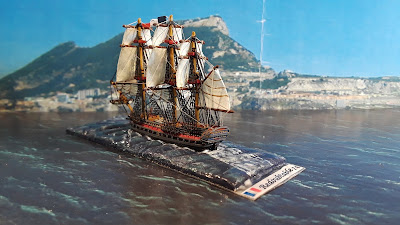 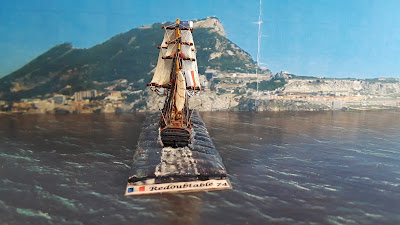 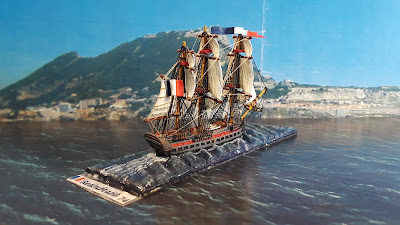 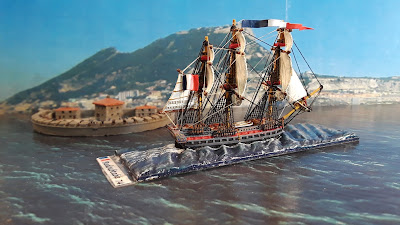 Posted by A Miniatures Hobby Room at 5:21 PM 5 comments:

The second Davco xebec I had started has ended up as a Saint-Malo French corsair. Why Saint-Malo you ask? Because that is the only French corsair ensign I had available. There are 18 guns/ports on this model and I have no idea what size they are. Probably 8 to 12 pounders would be my guess. Hope you like it. 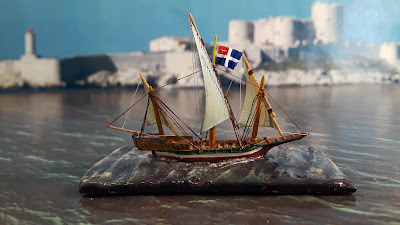 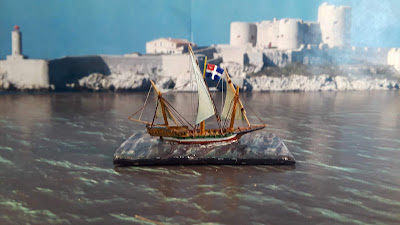 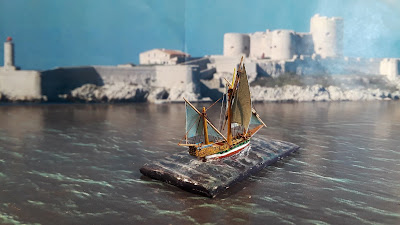 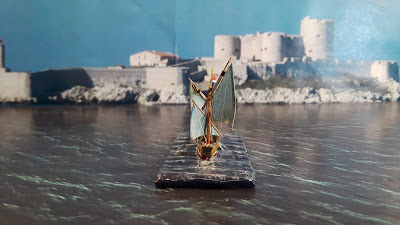 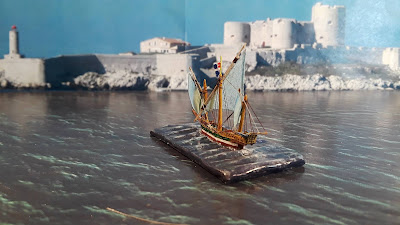 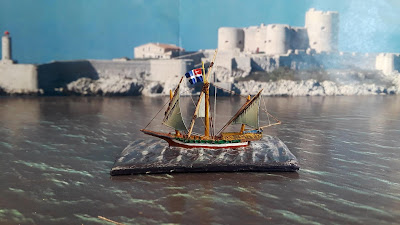 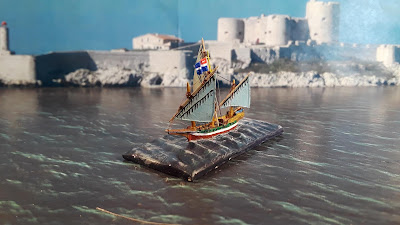 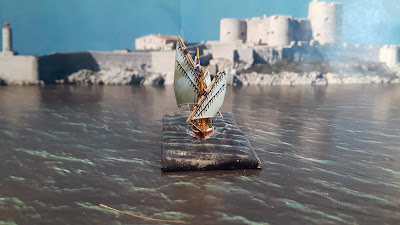 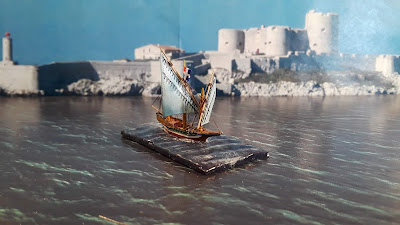 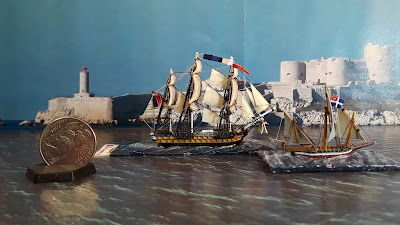 Posted by A Miniatures Hobby Room at 4:35 PM 2 comments: