This Davco model of the 112 gun Salvador del Mundo is very different from the Santa Ana hulls from Langton and Navwar though it was a sister ship. Really none of the three really resemble the Santa Ana deck plan drawings. Like all Davco models, the spanker and jib sails billow in opposite directions so I changed the jib sail billow using a paint brush shaft after cutting the sails apart from each other. Also scratch built masts and spars replaced the soft metal masts that came with the kit.

The following details of the Battle of Cape St. Vincent is taken from an excellent site www.britishbattles.com.

The battle began at about 11.30am. Jervis ordered the British Fleet into line ahead formed on the flagship, Victory, with Troubridge’s Culloden leading the line; Nelson in Captain third from the rear. Culloden headed for the gap between the two divisions of the Spanish Fleet, cutting off the leading 9 ships. As the line entered the gap Culloden opened fire, followed by the succeeding ships, the guns being double shotted for the first broadsides.

Each of the two Spanish divisions turned to the North, apparently to sail down the flanks of the British Fleet and escape. To conform Culloden tacked ship to lead the British line in pursuit of the larger Spanish division.
Immediately the difficulty became apparent to Nelson at the rear of the line: The British ships would be forced to pursue the Spanish, their admiral now aware that the British Fleet was significantly stronger than he had expected, even though his force was double its strength. It was unlikely that the pursuit could produce the decisive battle Jervis looked for.

Nelson acted in the ruthlessly aggressive and decisive manner that was his unique hallmark. Disobeying the admiral’s order to sail in line ahead conforming to Victory, Nelson turned the 74 gun Captain hard to port and cutting back through the British line between Diadem and Excellent sailed straight for the van of the Spanish division, attacking the 130 gun Santissima Trinidad, the largest ship afloat.

The Spanish flagship joined by San Josef, 112 guns, Salvador del Mundo, 112 guns, San Nicolas, 80 guns and San Isidoro, 74 guns, engaged Captain. Culloden, leading the British Fleet in pursuit of the Spanish, rushed to Nelson’s assistance, as did the last ship in the line, Excellent, the three British ships battling with the van of the Spanish division until the remaining British ships came up and the engagement became general.
Blenheim, 90 guns, joined the action between the three British ships and their Spanish adversaries, accompanied by Diadem, while Excellent engaged Salvador del Mundo and San Isidoro, causing each of these ships to cease action and haul down their colours. Collingwood on Excellent pushed on without securing the two ships to assist the hard pressed Captain.

Collingwood engaged the 80 gun San Nicolas with a heavy fire from a distance of 10 feet, causing the Spanish ship to swing away abruptly and foul the 112 gun, three decker San Josef, before taking Excellent on to engage Santissima Trinidad.

Nelson saw his further opportunity. Although the Spanish broadside had completely dismasted Captain, Nelson directed Miller to put the ship alongside the damaged San Nicolas and himself led a strong boarding party onto the Spanish ship. Among the boarders were soldiers from the 69th Regiment and several “Old Agamemnons”. The captain of San Nicolas was in the act of surrender to Nelson after a vigorous struggle when the crew of San Josef in the towering ship alongside opened fire on the deck. Calling for reinforcements from Captain, Nelson boarded the second Spanish ship and took her, receiving the surrender from the captain, the admiral being a casualty.

Looking to take further part in the battle Nelson transferred to Minerve and called for a launch to take him to the nearest ship of the line, Irresistible; but by the time he reached her the battle was ending and the Spanish Fleet heading for Cadiz.
The heavy damage to the British ships and the presence of the unengaged 9 ships of the Spanish van ruled out any pursuit and Jervis had to be satisfied with the capture of 4 Spanish ships, 2 being first rates, while lamenting that no other captain had taken the initiative to capture the badly damaged Santissima Trinidad in the way Nelson had taken the San Nicolas and the San Josef. But the action was a decisive victory and the Spanish Fleet failed to join the French in Brest in its threat to mainland Britain, remaining bottled up in Cadiz by Jervis’s resumed blockade.

Nelson went on board Victory to report to Jervis who hugged and thanked him for the brilliant exercise of initiative that had led to such a success. 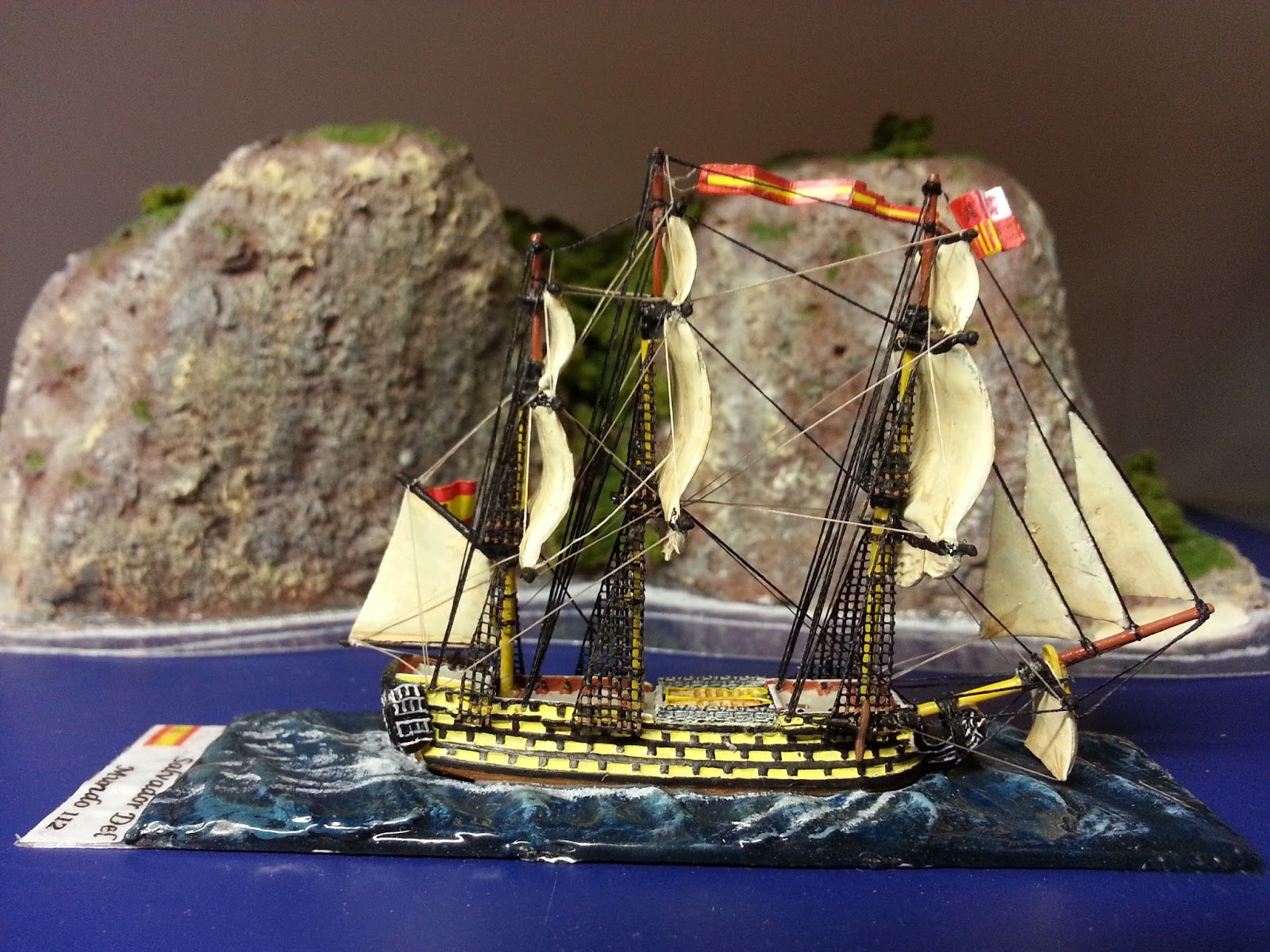 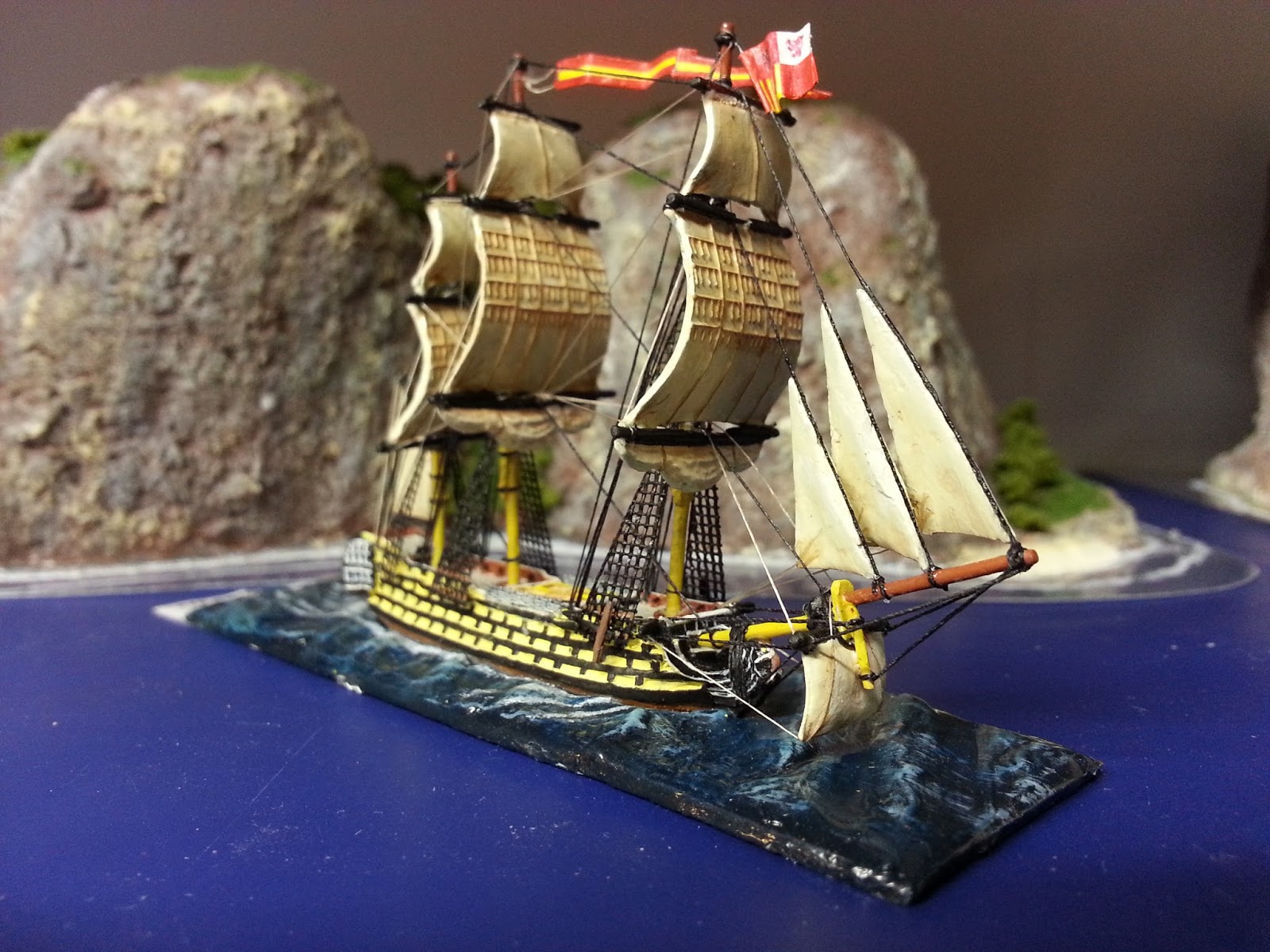 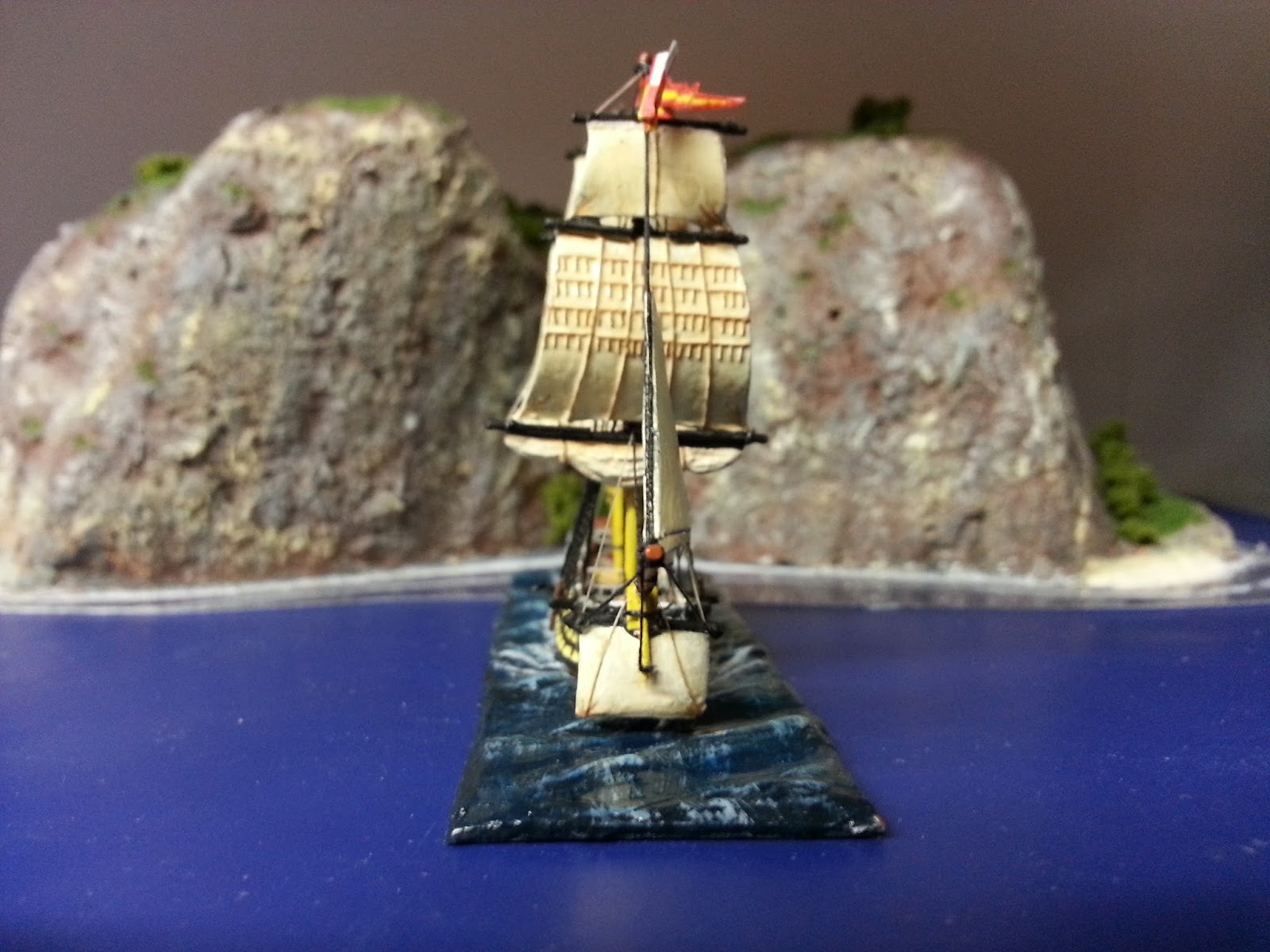 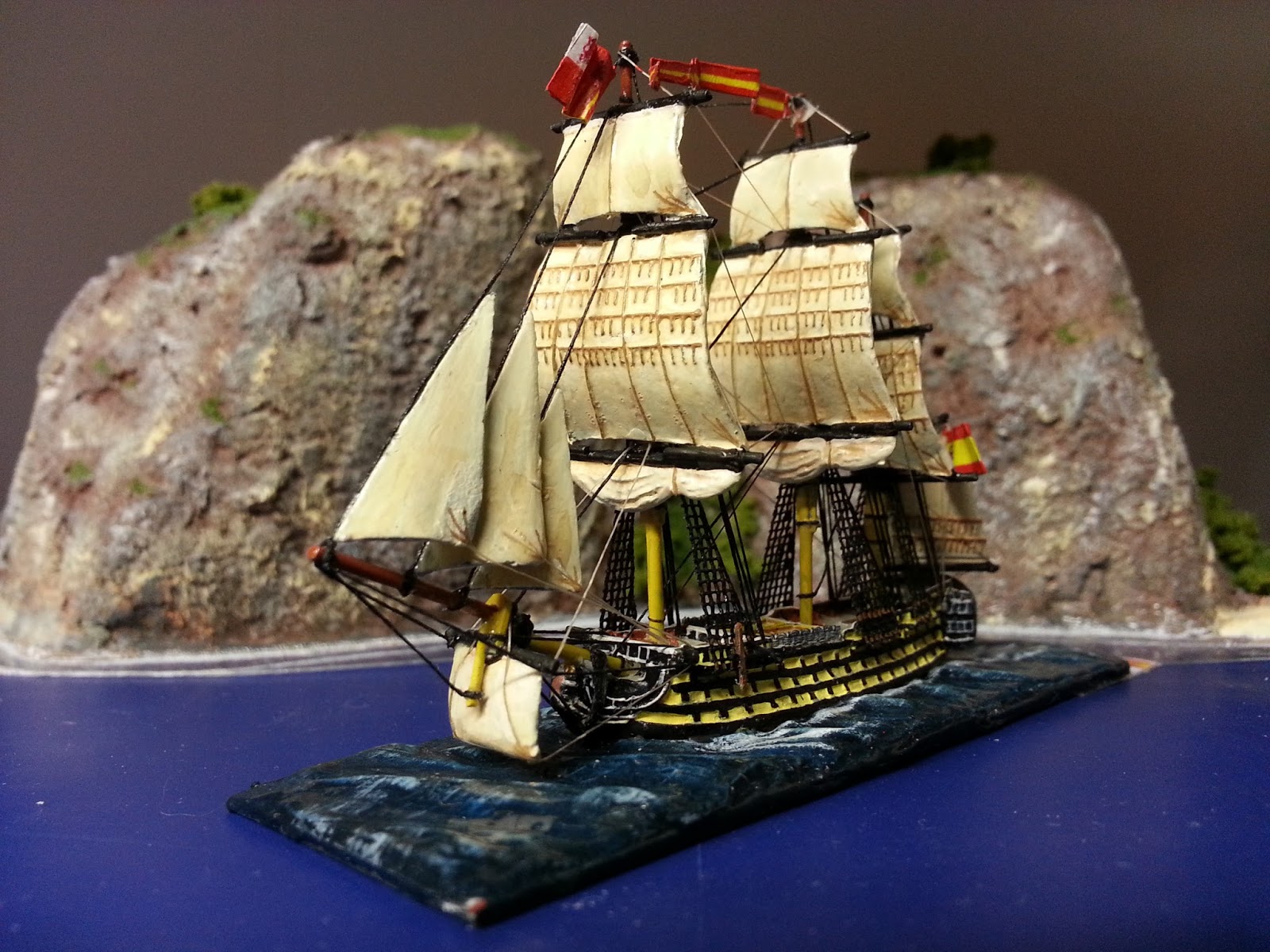 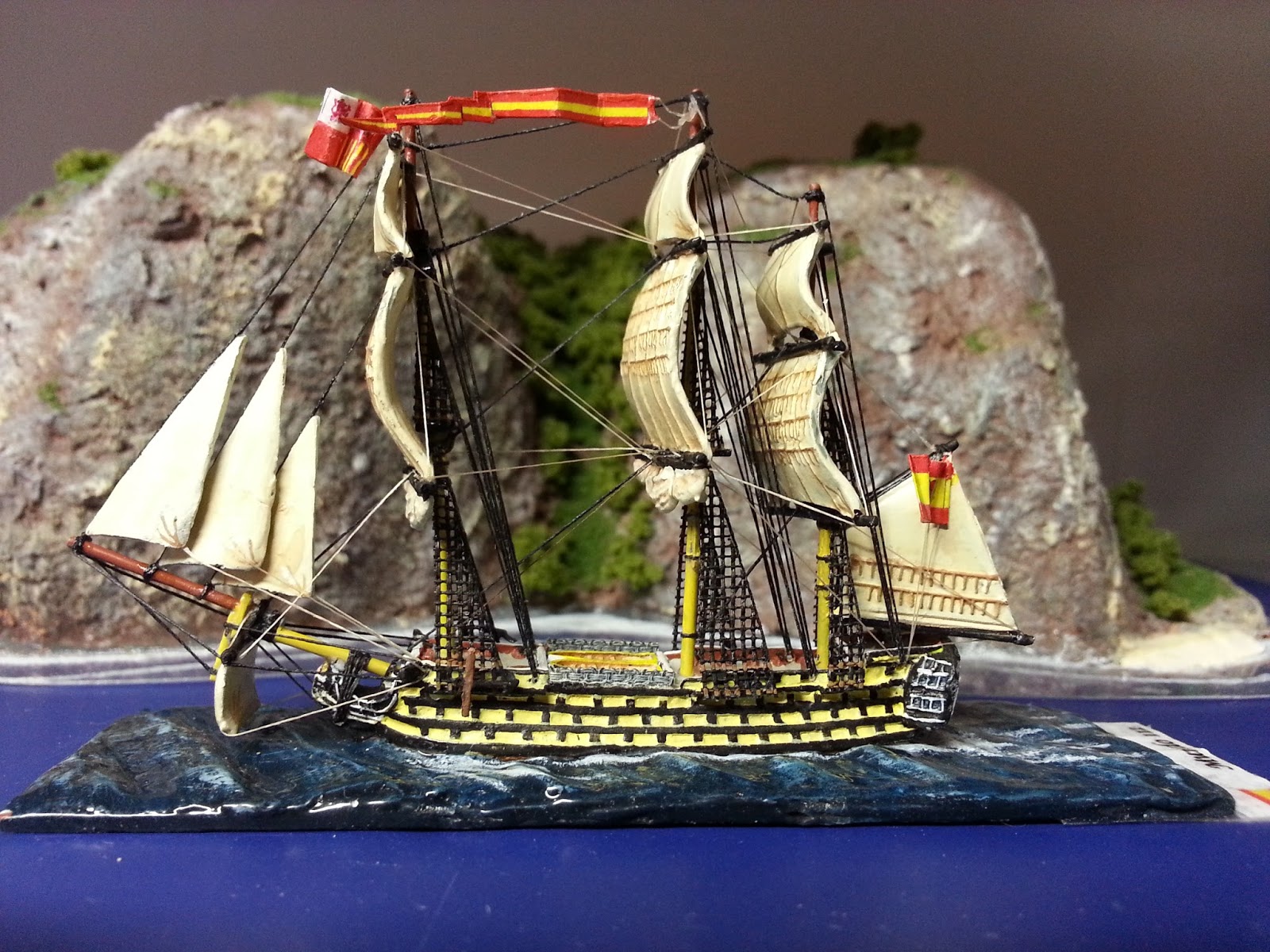 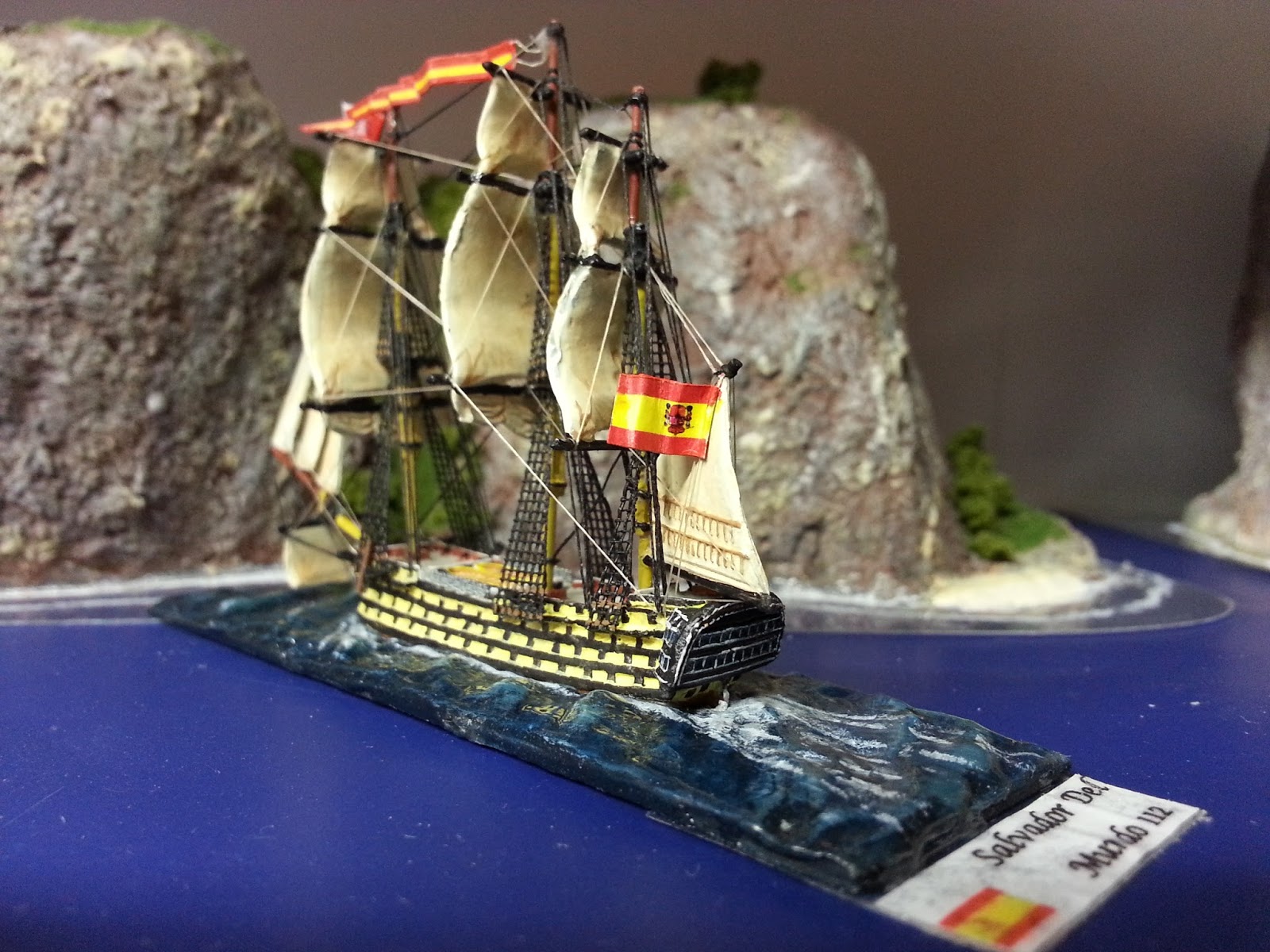 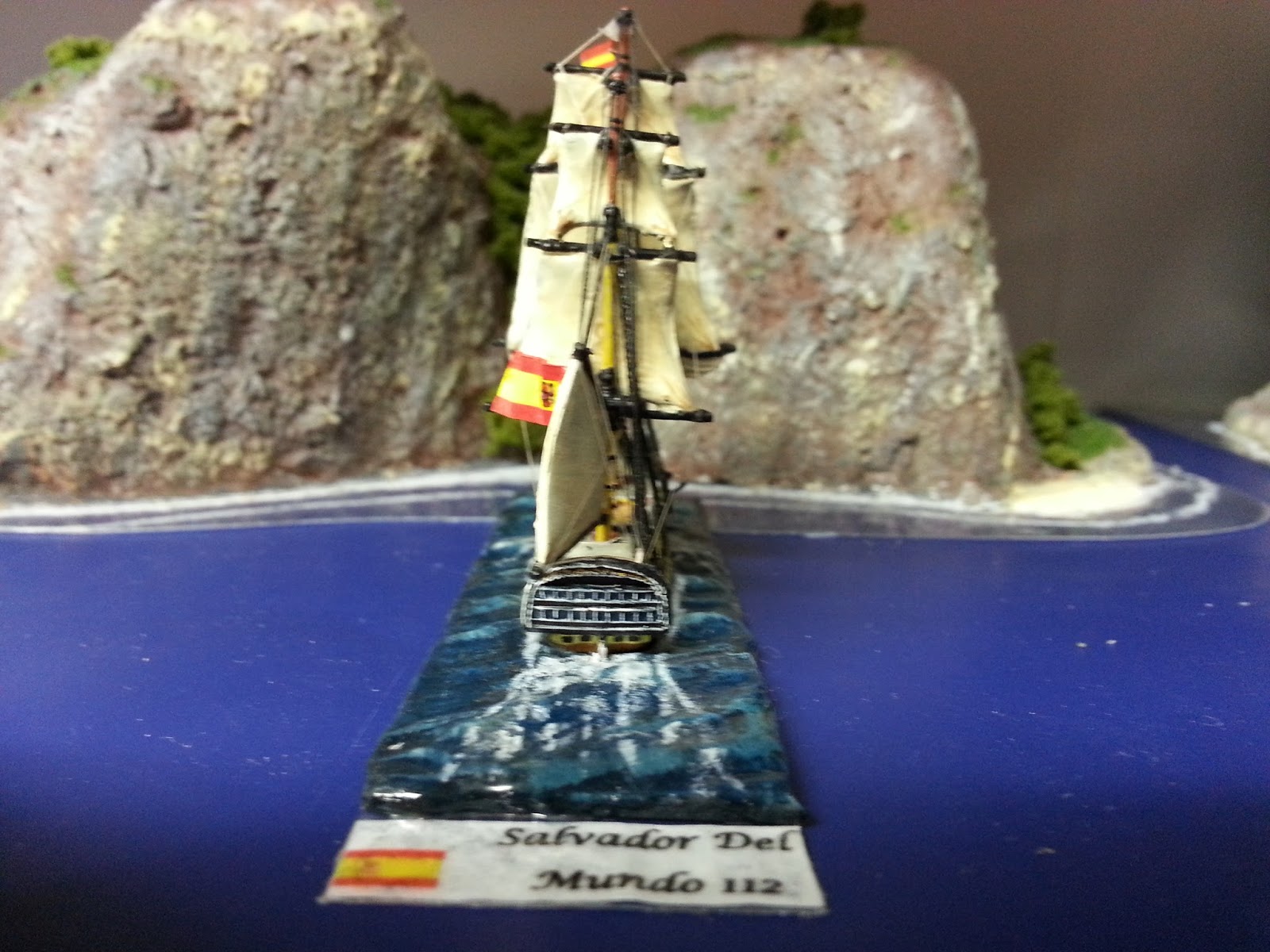 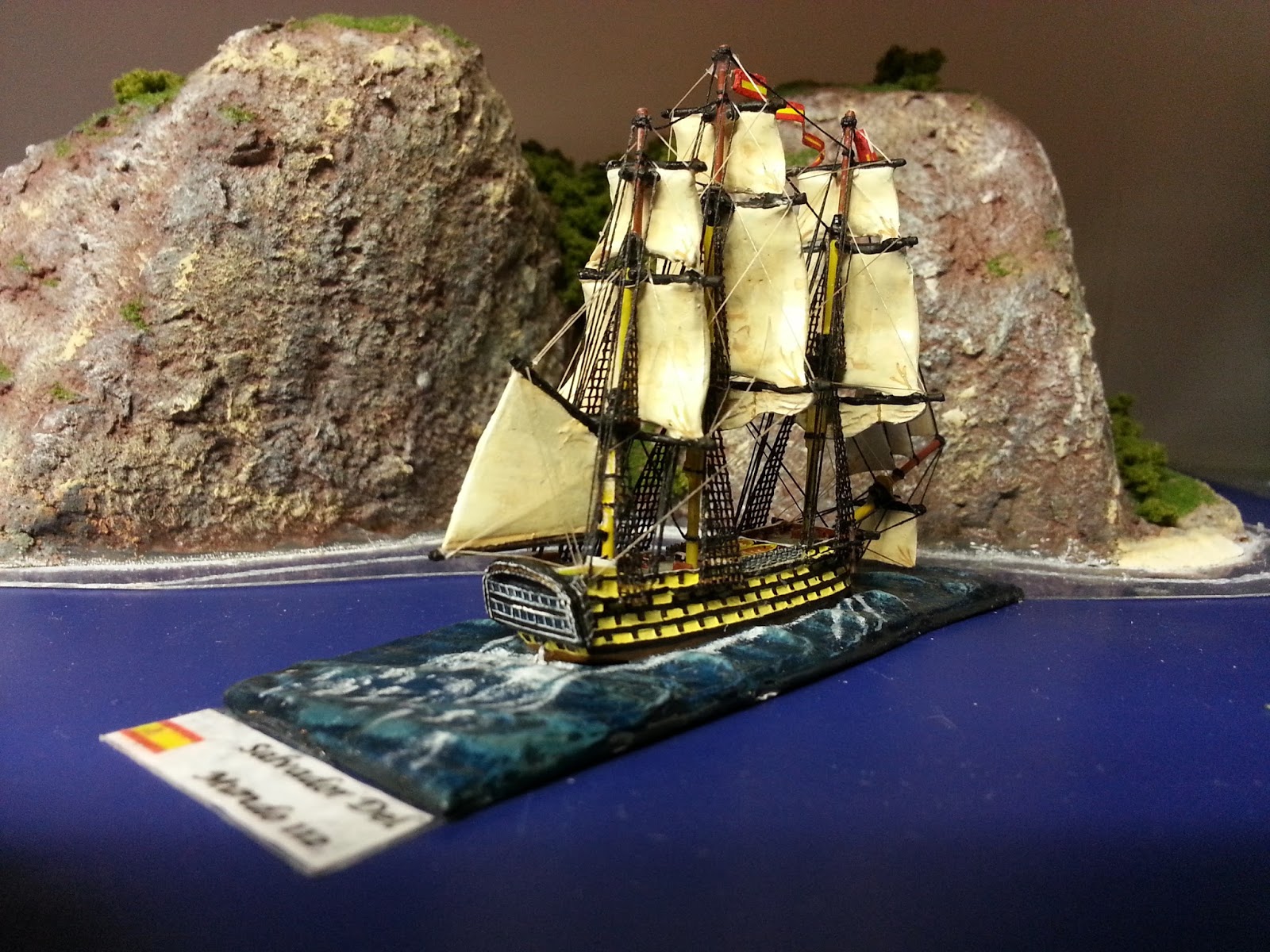 I think I just have a Navwar frigate left to do for the Spanish fleet. Spring is here so my shipyard time will be hit or miss from now through the summer. Thank you all for loking.
Posted by A Miniatures Hobby Room at 9:12 PM No comments: