Here is hoping all of my hobby friends and acquaintances had a wonderful and prosperous Christmas holiday with your loved ones.

2020 has been a challenge for all of us. The upside is that, for a lot of us, the forced isolation has afforded more time for painting and building. Hopefully the coming year will bring a return to some normalcy like in-person gaming, so all of this year's work can be used as intended.

This year for Christmas I receved a heat gun with a large selection of shrink tubing, a flexible shaft for my Dremel and three different size adjustable collets. I also got a Galway Bay tee shirt with an Irish hooker sail boat printed on it. Also one of those wooden laser etched schooner models and a book Rigging Period Fore and Aft Craft. To top it off my girls pitched in and got me my favorite single malt scotch! 🤓 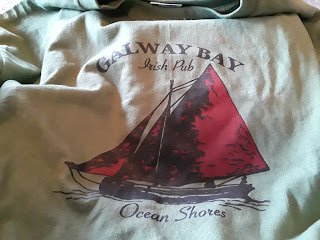 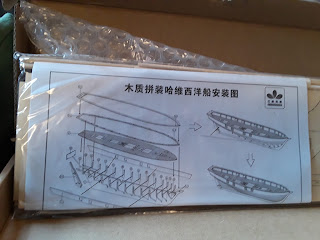 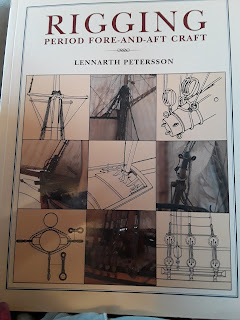 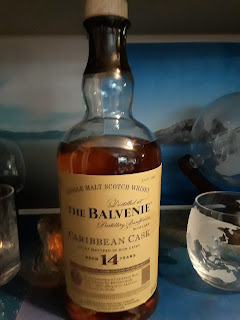 And this is my progress on one of the FDM ships from Peter: 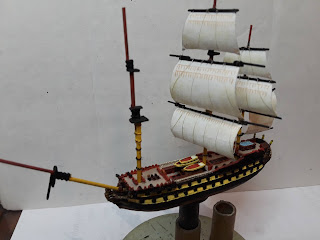 Posted by A Miniatures Hobby Room at 10:24 AM 3 comments:

Wow this is turning into a nice end to a horrible year. The wife brought home a nice surprise package from Pete Lowe in the UK, Seems he bought a FDM 3D printer and has been playing around with it. He packed up a bunch of his prints and put them in the post for me. I guess I haven't been posting enough and he figured I needed something to do. What a great friend! Here is what I unpacked tofay.

Pretty cool. I spent some time cleaning a few of them and I am impressed with the detail, as good as any of the Warlord Black Seas ship models. I just assumed that FDM was much cruder than this based on the FDM 3D prints I saw from Shapeways several years ago. Needless to say I am pleasantly surprised. I am not sure where Peter obtained the STL files he used. I believe he mentioned Wargame Vault as one source when we talked a month or so ago. The Montanes is a perfect match to the historical plans, albeit a bit on the bulky side, like the Warlord 3rd rates. But the Temeraires are low and sleek, as are the frigates and sloops.

Then there are the WWII ships (1/3000 scale I think?) I will have to check Mal Wright's posts for ideas how to paint these. The triremes will be fun too, particularly the sail designs for them.

Well, between Peter Lowe and Henry Turner, I believe I have plenty to keep me busy in the shipyard for the foreseeable future! Cheers!

Posted by A Miniatures Hobby Room at 8:06 PM 2 comments:

In my last post I talked about the resin 3D ships I received from Henry Turner. I also showed the repairs I made on the damaged models, one of which was this one, the Canada class 74 gun HMS Captain of 1787.

HMS Captain served as part of the port of Toulon occupation fleet during the war with revolutionary France. She then took part in the raid on Genoa. In June 1796, Captain Horatio Nelson was transferred from HMS Agamemnon into HMS Captain. Admiral John Jervis appointed Nelson commodore of a squadron deployed off Livorno to monitor Napoleon's march through northern Italy. In February 1797, Nelson rejoined Jervis's fleet 25 miles west of Cape St. Vincent on the southwest tip of Portugal. On the 14th of February the British intercepted a Spanish fleet and joined battle. Nelson realized that the leading Spanish ships were escaping and wore Captain out of the line of battle to attack the much larger Spanish ships. Captain exchanged fire with the Spanish flagship SantisimaTrinidad, mounting 136 guns on four decks. Later Captain closely engaged the 80-gun San Nicholas, after she was disabled by a broadside from HMS Excellent and ran into another ship, the San Josef of 112-guns. With Captain barely maneuverable, Nelson ran his ship onto San Nicholas and boarded her. After taking this ship, he ordered his men to board San Josef. As this was taking place San Josef signaled her surrender.

This action was later immortalized as "Nelson's Patent Bridge for Boarding First Rates". For this battle Admiral John Jervis was made Earl St. Vincent, and Nelson was knighted for his initiative and daring.

(The history above is paraphrased from Wikipedia)

I don't believe I mentioned in the previous post that I only received the ship hulls. Henry Turner includes the full sail and mast sets with his ships, but I requested only the hulls as I like to make my own masts, spars and sails. It's part of the fun I have building these guys. 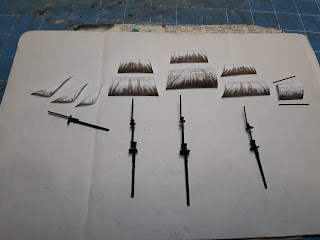 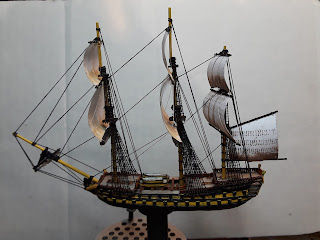 And here is the finished ship: 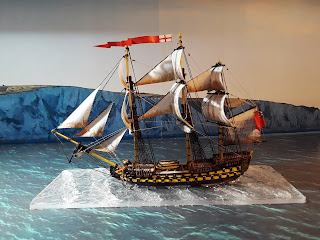 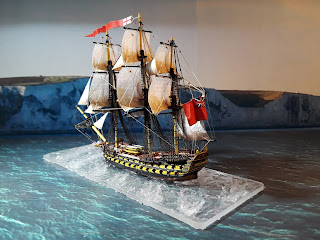 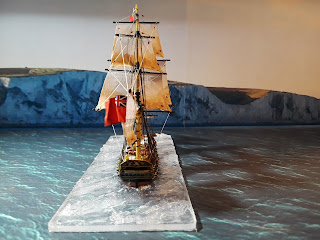 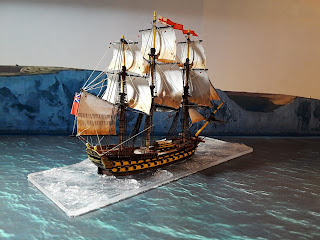 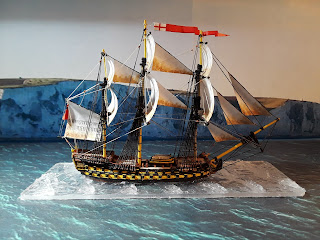 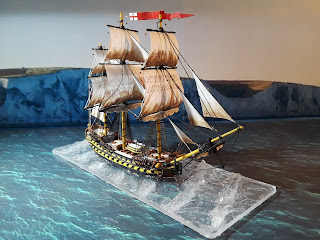 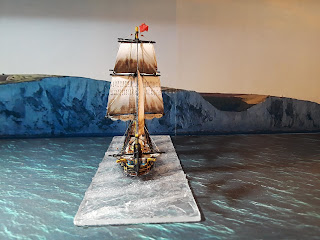 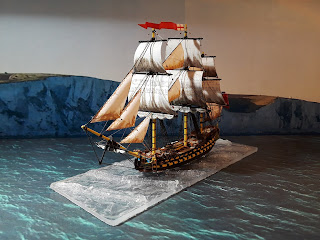 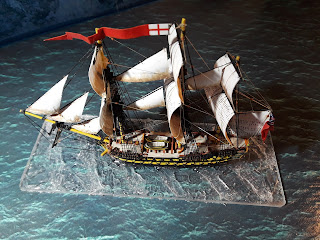 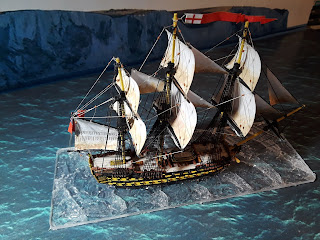 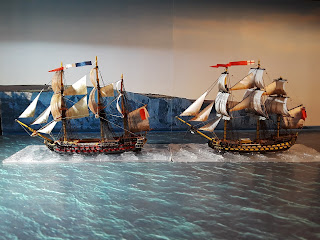 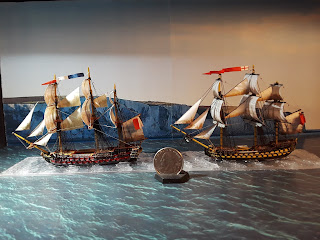 I received my first ever order of 3D ships from designer Henry Turner. I first got acquainted with Henry nearly two years ago  when he was living in Siberia. He contacted me about the 1/1200 scratch builds I was doing and was interested in trying his own in 1/900 scale as I remember. We corresponded quite a bit as he made two or three ships. At some point he developed an interest in the design aspect for 3D printing. He relocated back to his home in the UK, and now is one of the two best known designers of 3D ships in several scales. Henry recently aquired a new 3D resin printer and has expanded his business to include physical prints of his designs. I chose the 1/700 scale to add to the Warlord Games Black Seas ships I have been working on. Here is a photo of my order: 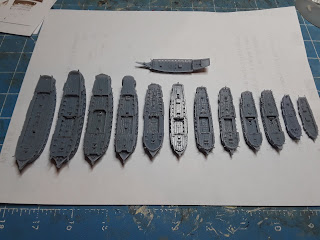 From left to right:
Majestic (razeed), Courageux, Canada class (Captain), Holsteen, Leda class, Concorde class, Unite (Surprise), Magicienne, two Pandora class, Bounty, Lynx, and above is a xebec.
The post from the UK was quite rough (a 2" hole punctured in one side of the box) and there was some minor damage to four of the ships. The worst was Holsteen and Captain including the loss of railing, lanterns, and catheads, along with some guns snapping off. But nothing I couldn't fix. 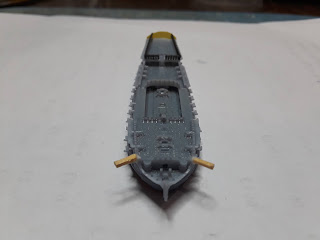 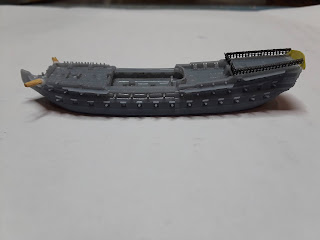 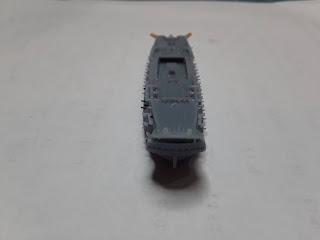 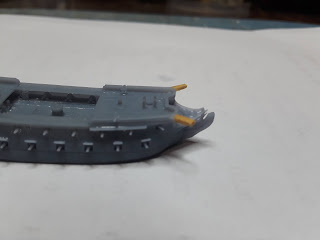 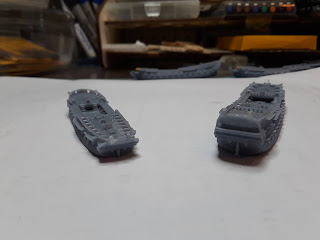 I am about halfway through building HMS Captain right now and when it's done I will be posting the result. Here is the painted hull: 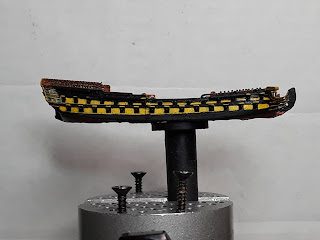 Be sure to check out Henry's new kickstarter:
https://www.kickstarter.com/projects/ageofadmirals/age-of-admirals-nelson-at-st-vincent