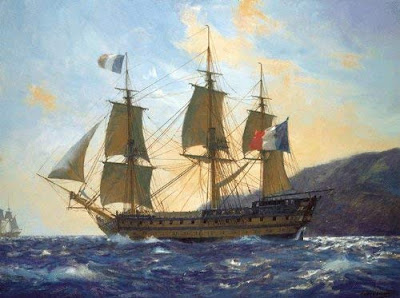 This ship is one of Langton's French 80 gun at quarters models with topsail and jib sail set. Nothing is scratchbuilt on this one except the base and ratlines. The anchors and ship's boats are GHQ.

Brief History:
Le Bucentaure was the first ship in the French navy to bear this name. Designed by Jacques Noel Sane, her lines were virtually identical to the 80 gun ships Indomptable, Formidable, and Neptune, which also fought at Trafalgar, as well as the captured Tonnant that fought with the British fleet. The two decked 80 gun ships employed in the French navy were far superior to the cumbersome three decked 80 gun ships previously used in the Royal navy. Bucentaure was launched at Toulon in 1803. She was blockaded in Toulon by the British fleet for the next few years until, as flagship of Vice-Admiral Pierre Charles Jean Babtiste Silvestre de Villeneuve, she broke out with the French fleet on the 17th of January 1805. Villeneuve's squadron comprised 20 vessels. The fleet was sighted a 6:30 PM by frigates that had remained on station. As the fleet sailed westward the weather deteriorated and scattered the fleet, compelling Villeneuve to return to Toulon. On March 29 the fleet again evaded the British and sailed for Cartagena, arriving there on April 6, where Villeneuve joined six Spanish ships commanded by Admiral Salcedo. Villeneuve left Cartegena without the Spanish and sailed through the the Straits of Gibraltar. After taking on provisions at Cadiz the fleet proceeded to the West Indies as ordered. While there the French captured a British Merchant convoy of 15 ships on June 7. After receiving word that Nelson had arrived in the area, Villeneuve abandoned his plans and sailed for Europe. The fleet fell in with Rear Admiral Sir Robert Calder's squadron off Finisterre July 22. Fighting began at 3 PM and was sporadic for the next five hours in dense fog. Calder won a small victory but failed to take the initiative, allowing Villaneuve to escape and re-mobilize. He was recalled home to face a court-martial. Rather than moving to Brest as Napoleon ordered, Villeneuve instead made for Cadiz. While passing Cape St. Vincent on August 18, the fleet captured and burnt three British merchant vessels. Then they chased off Collingwood's blockading ships and entered Cadiz harbor. This ill fated decision caused Napoleon to cancel his plans to invade England. Villeneuve's new orders were to enter the Mediterranean. To achieve this he had to break out of Cadiz. Bucentaure and the combined fleet left Cadiz on 19 October and sailed toward Gibraltar in three divisions, shadowed by Nelson's ships.  That night the three divisions regrouped in into line ahead. By Monday the 21st action was inevitable. At 8:30 AM the combined fleet came around on a larboard tack northwards towards Cadiz, each ship clearing for action. This put Bucentaure in the center, lying eleventh in line from the head of the van. Ahead lay the Santisima Trinidad (136), astern Neptune (80) and on her larboard quarter Redoubtable. At about 12:20 PM Bucentaure, in unison with Santisima Trinidad, Neptune and Redoubtable, commenced firing on the fast approaching British column led by Nelson, concentrating their 185 guns on the lead ship Victory. Victory crossed Bucentaure's stern at barely 28 feet, firing her larboard batteries to rake her with double and treble shotted guns. Upwards of 1.5 tons of solid iron slammed through the entire length of Bucentaure's decks, up-turning guns, cutting through timber and scything down men. The entire stern was reduced to matchwood, 20 guns out of action and some 200 men killed and wounded in this one devastating salvo. Within 15 minutes the British Neptune (96) ranged up across Bucentaure's stern and raked her again with treble shotted guns. This volley, containing forty-two 32 lb balls, eighty-seven 18 lb balls and thirty 12 lb balls, brought a second wave of destruction taking every remaining 24 pounder gun off it's carriage and killing half of the remaining men manning the lower deck 36 pounders. turnkng to larboard, Neptune then poured another broadside into Bucentaure's starboard side before passing on to engage Santisima Trinidad. This last salvo wounded Captain Magendie, who was relieved by Lieutenant Daudignon. The few men remaining on Bucentaure's upper decks went below to reinforce the depleted gun crews. After a brief reprieve, Bucentaure was successively raked by Leviathan (74) and Conqueror (74), bringing down her main and mizzen masts, and a bit later her foremast fell. Conqueror came around to Bucentaure's starboard quarter and fired another broadside into her. Despite the fact Bucentaure had been reduced to a total wreck, she was fired upon again by Britannia. Seamen from Conqueror boarded to accept the surrender. Final casualties amounted to 40 per cent of her crew, comprising 197 dead and 85 wounded. On the following day a rising storm took it's toll on the British ships and their prizes and repairs were hastily made to Bucentaure to keep her seaworthy. On Wednesday morning October 23 Captain Cosmao-Kerjulien ventured out of Cadiz in a gallant attempt to recapture the prizes. Bucentaure was cast off her tow as Conqueror made preparation to counter the threat. Taking advantage of the opportunity, French prisoners abard the Bucentaure overwhelmed the prize crew and retook the ship. Unfortunately this victory was short lived. While attempting to get into Cadiz harbor in the storm, Bucentaure drifted onto the Puercos rocks near the harbor entrance and broke up. Barely 18 months old the ship was no more. 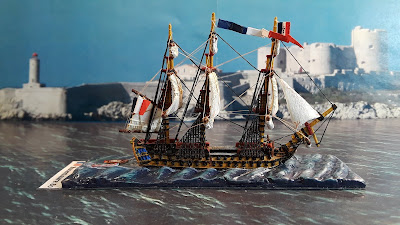 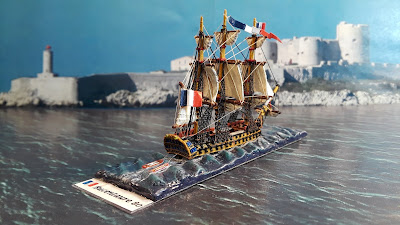 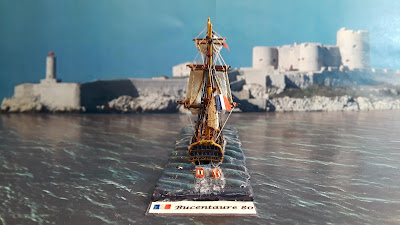 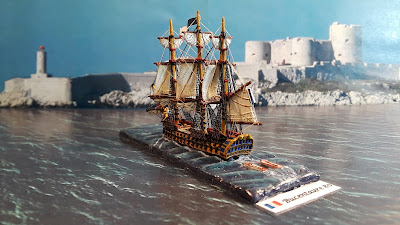 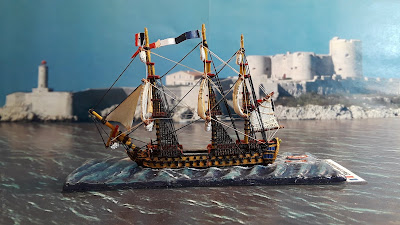 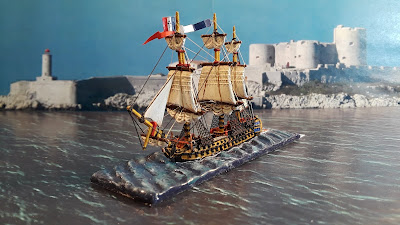 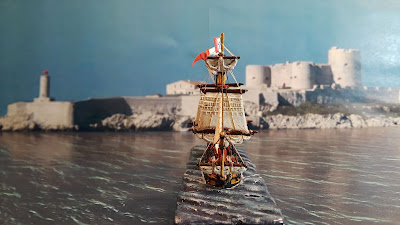 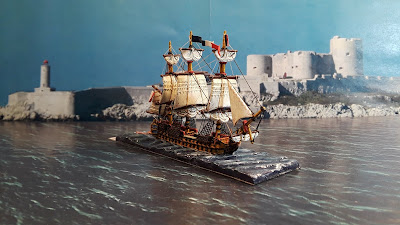 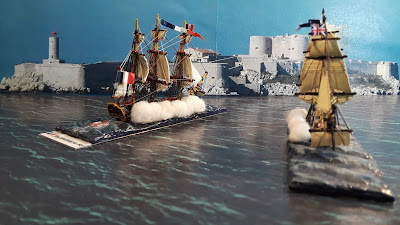 References: "The Ships of Trafalgar -The British, French and Spanish Fleets October 1805" by Peter Gooodwin - Keeper and Curator of HMS Victory

Posted by A Miniatures Hobby Room at 2:02 PM 6 comments: