Yesterday I attended the 2nd day of the Tactical Solutions convention in Spokane Valley. It was my first time at this convention and I got to meet a lot of good people. Unfortunately there were no Napoleonic Naval games (I was asked to put one on but I chickened out). There was a Lego Pirate game and a WWII naval game. 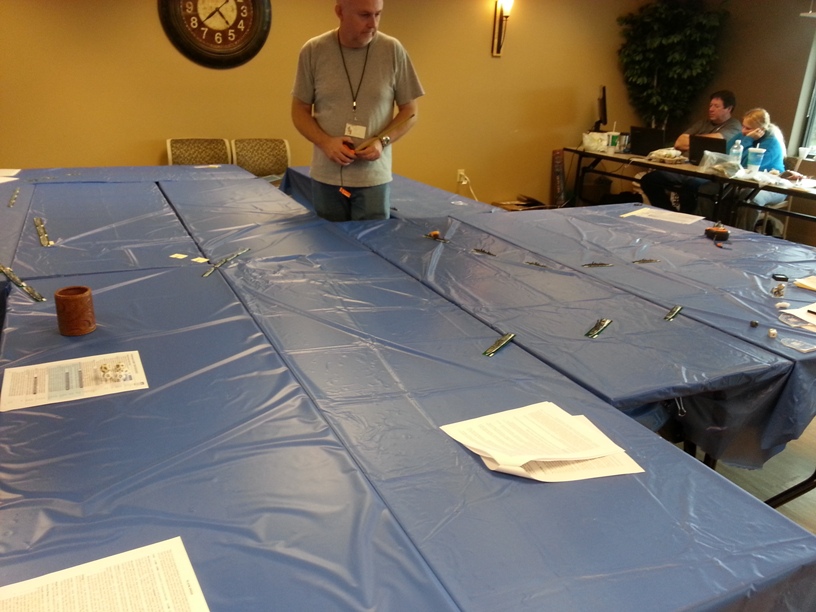 There were not as many people as last year from what I was told so there were several empty tables. I was able to play my first Saga game with instruction from Sven Lugar. He quickly killed my warlord so it was not a long game. But I did get a feel for Saga and would like to play again. I may have to put the ships on a shelf and pull out those unpainted Vikings, Saxons and Normans that have been collecting dust in a drawer for the last 10 years. 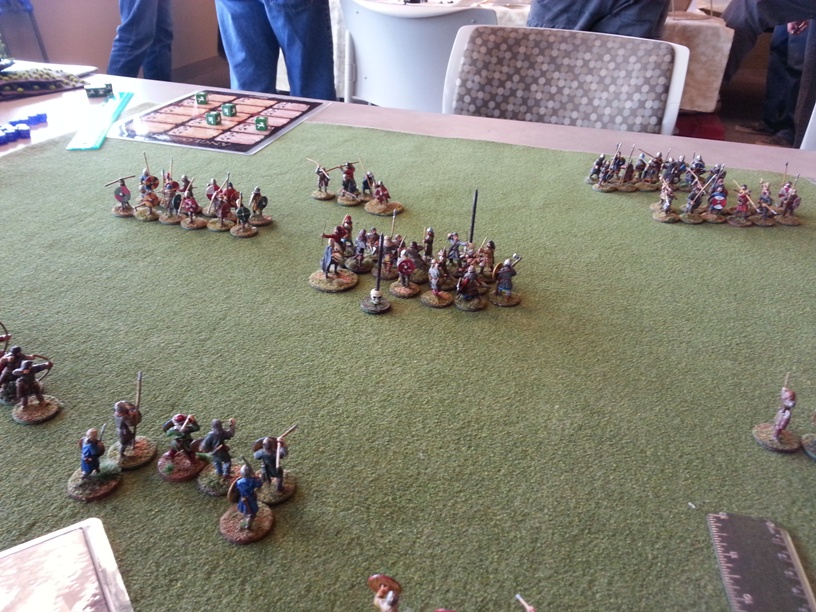 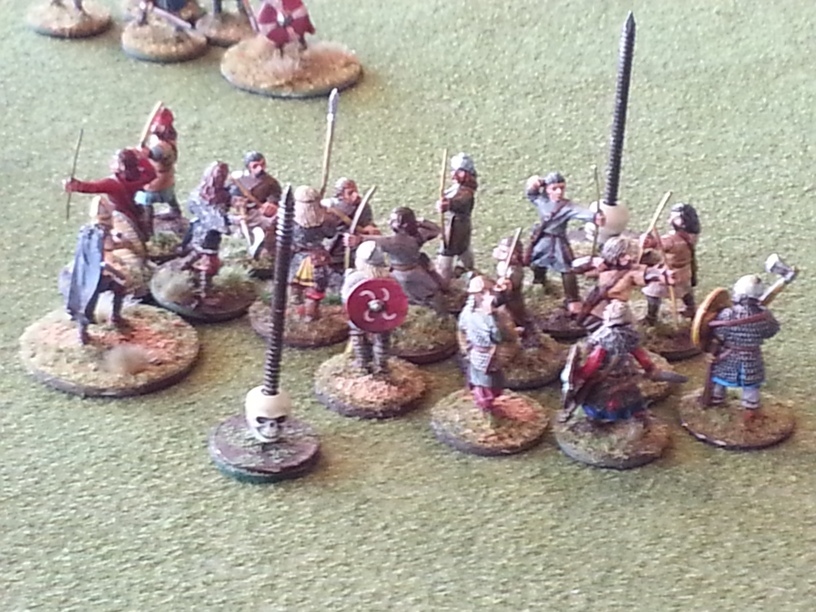 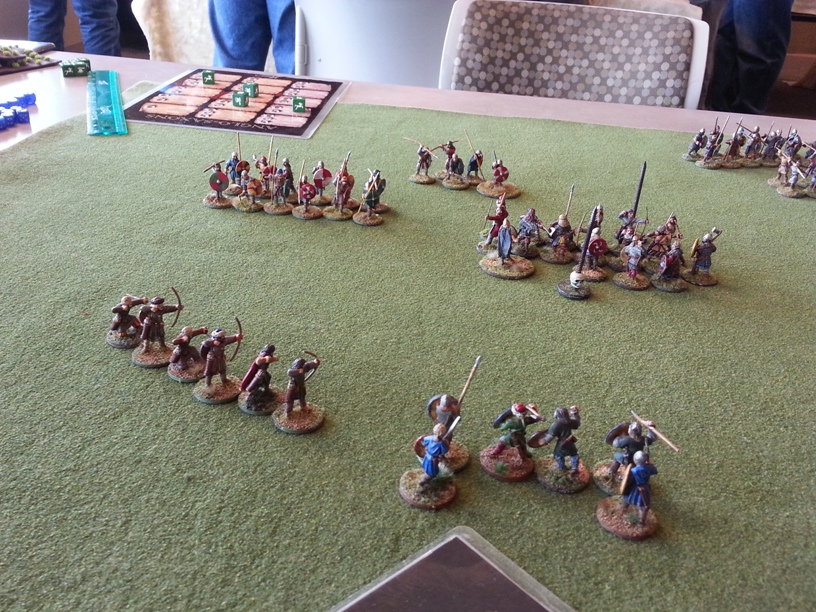 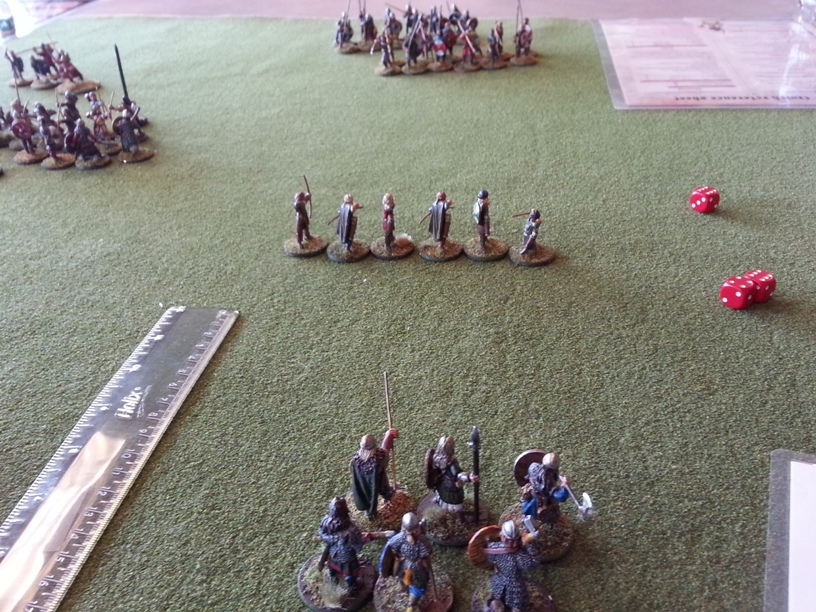 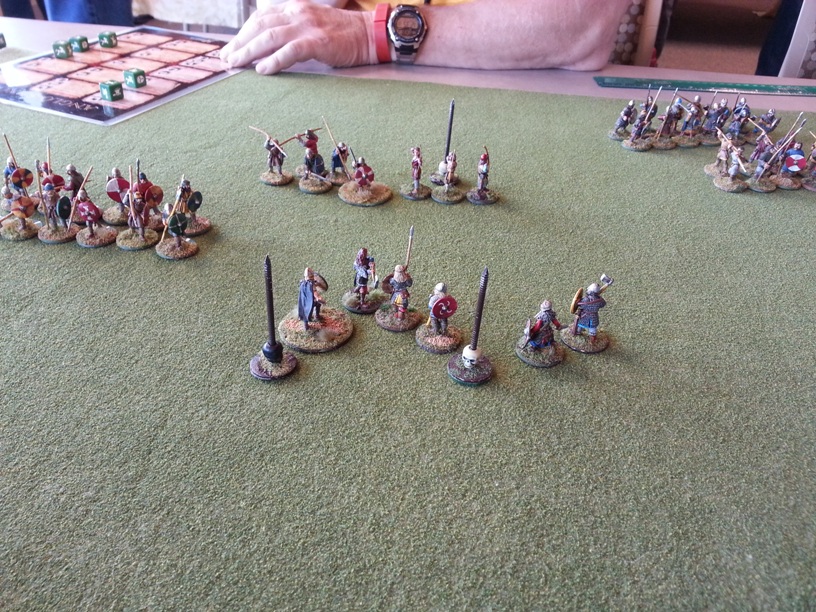 After lunch two games were starting next to each other: A Martian Invasion game put on by Sven Lugar, and a WWII Tank game put on by Mike Clinton. I was eyeing the Martian game (Sven had shown me his martians earlier) but as I walked up Mike asked me to join the tank game. Russians vs. Germans. I had three groups of three Russian winter camouflaged T-34 Tanks. Mike's son on my left also had three columns of  T-34's. Two other Russian players had columns of T-34's and SU-85's. Opposed to this was a German column of Tigers and Sturms. This was a long game and I'm not sure I liked the rules much. Shot after shot into the sides of the Tigers produced little effect, when we could even hit them, having to roll only snake eyes for a hit. I did better against the Sturms on the right, losing two T-34's for destroying two Sturms. Eventually shear numbers overwhelmed the Germans after having half of the Russian tank force destroyed. All but one of the SU-85's survived. 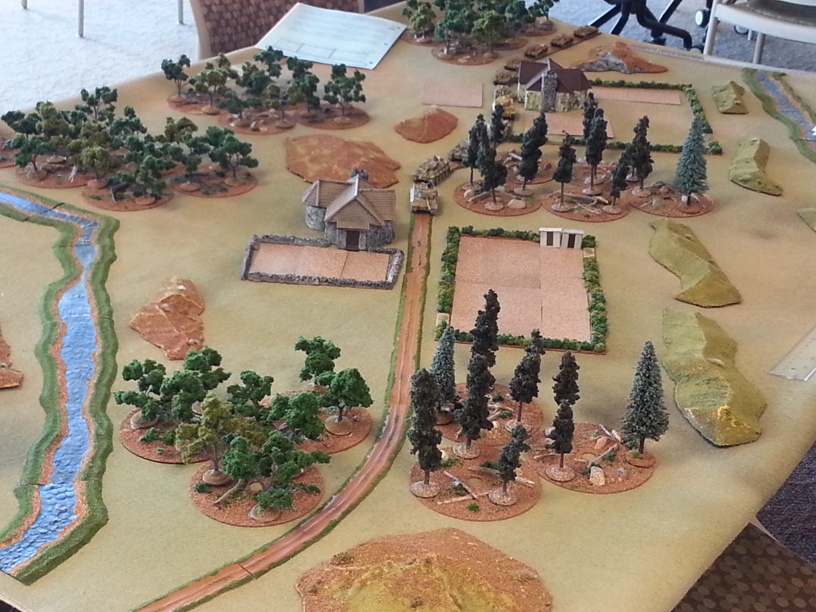 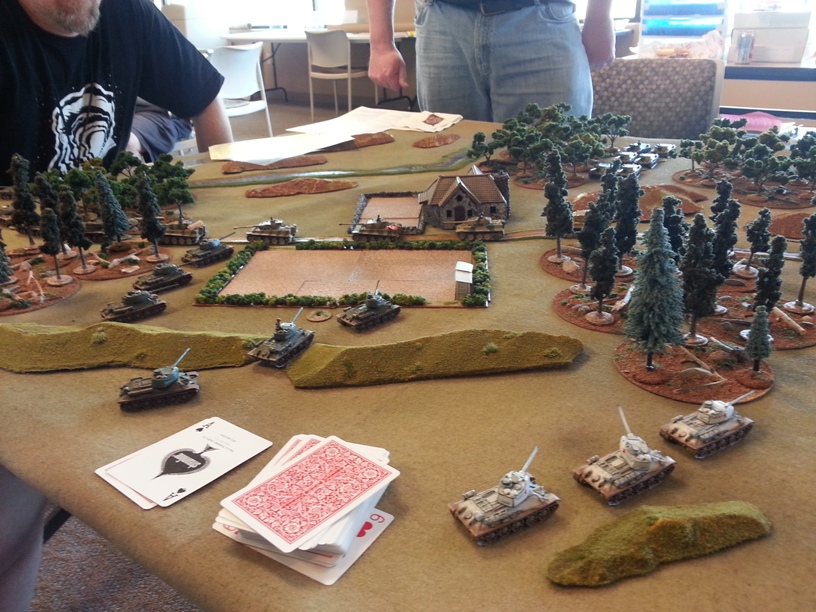 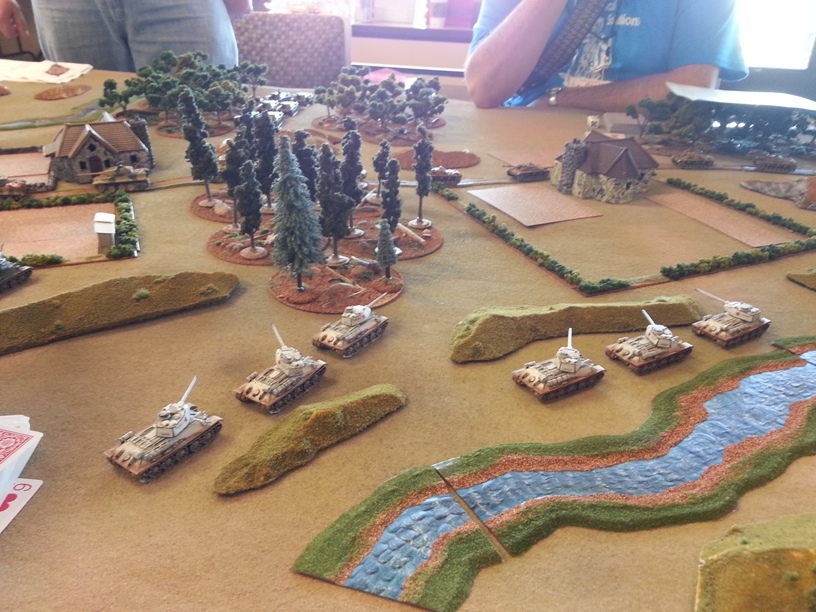 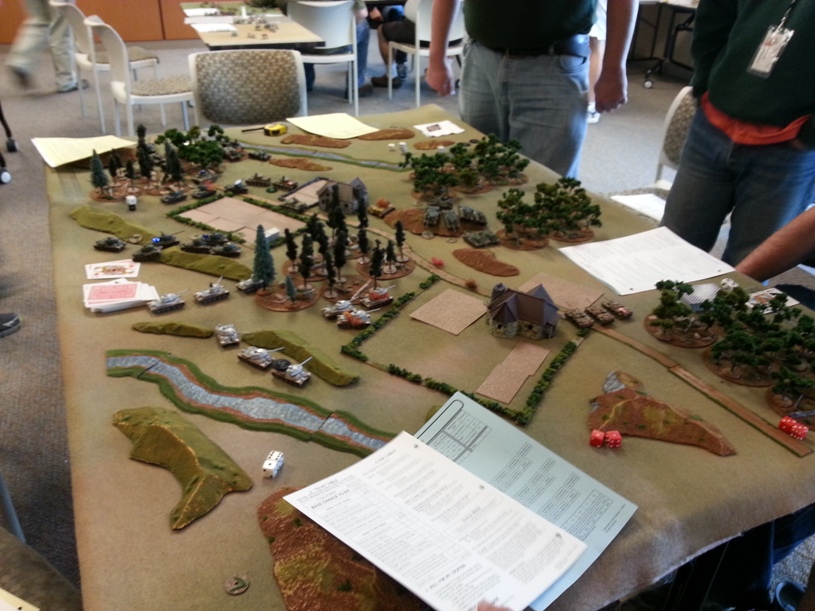 The martian game next door looked really interesting and from the sounds coming from the table, everyone enjoyed it. The martians won, driving the humans from the field. 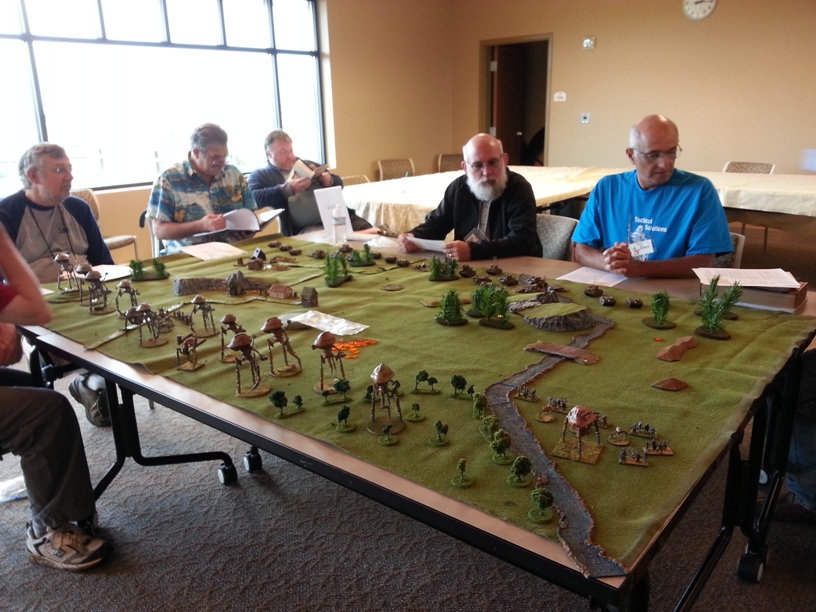 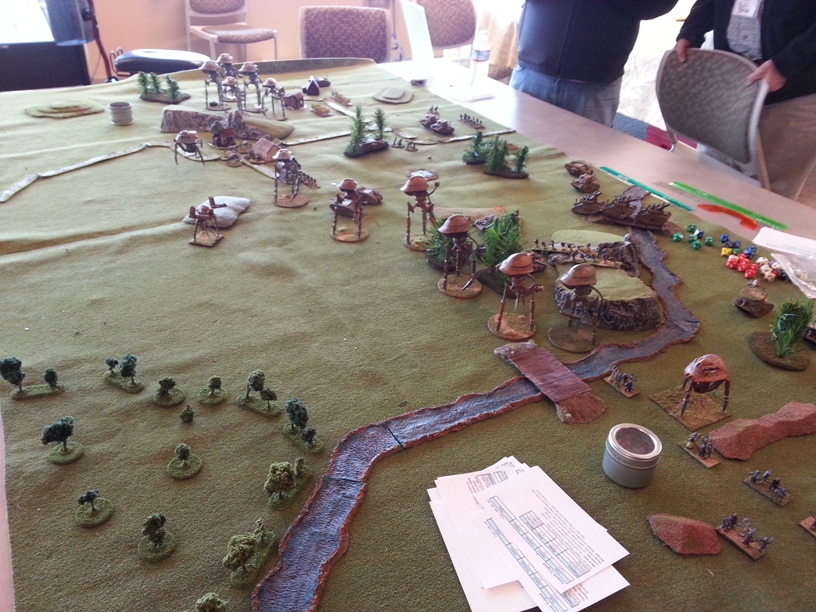 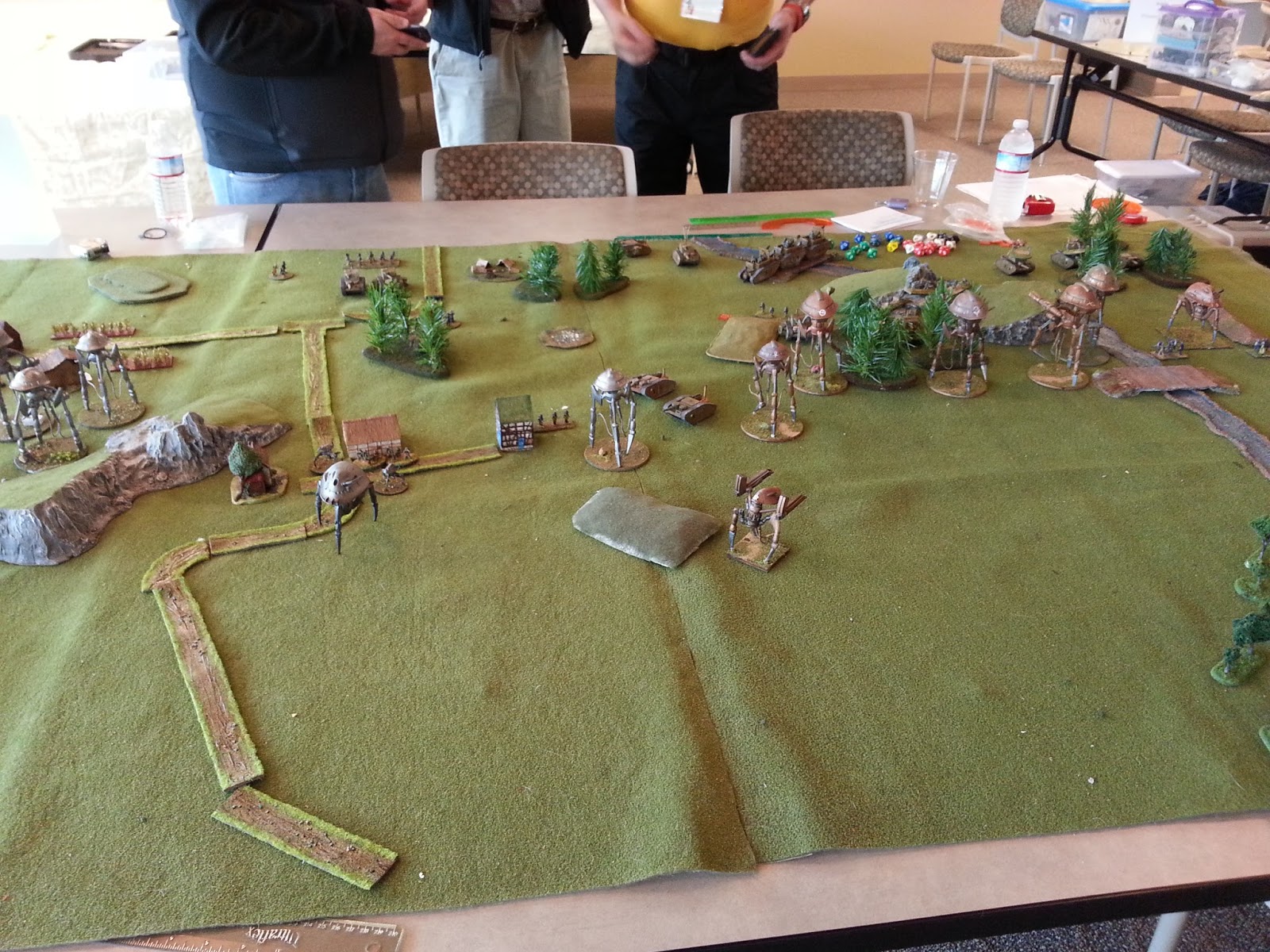 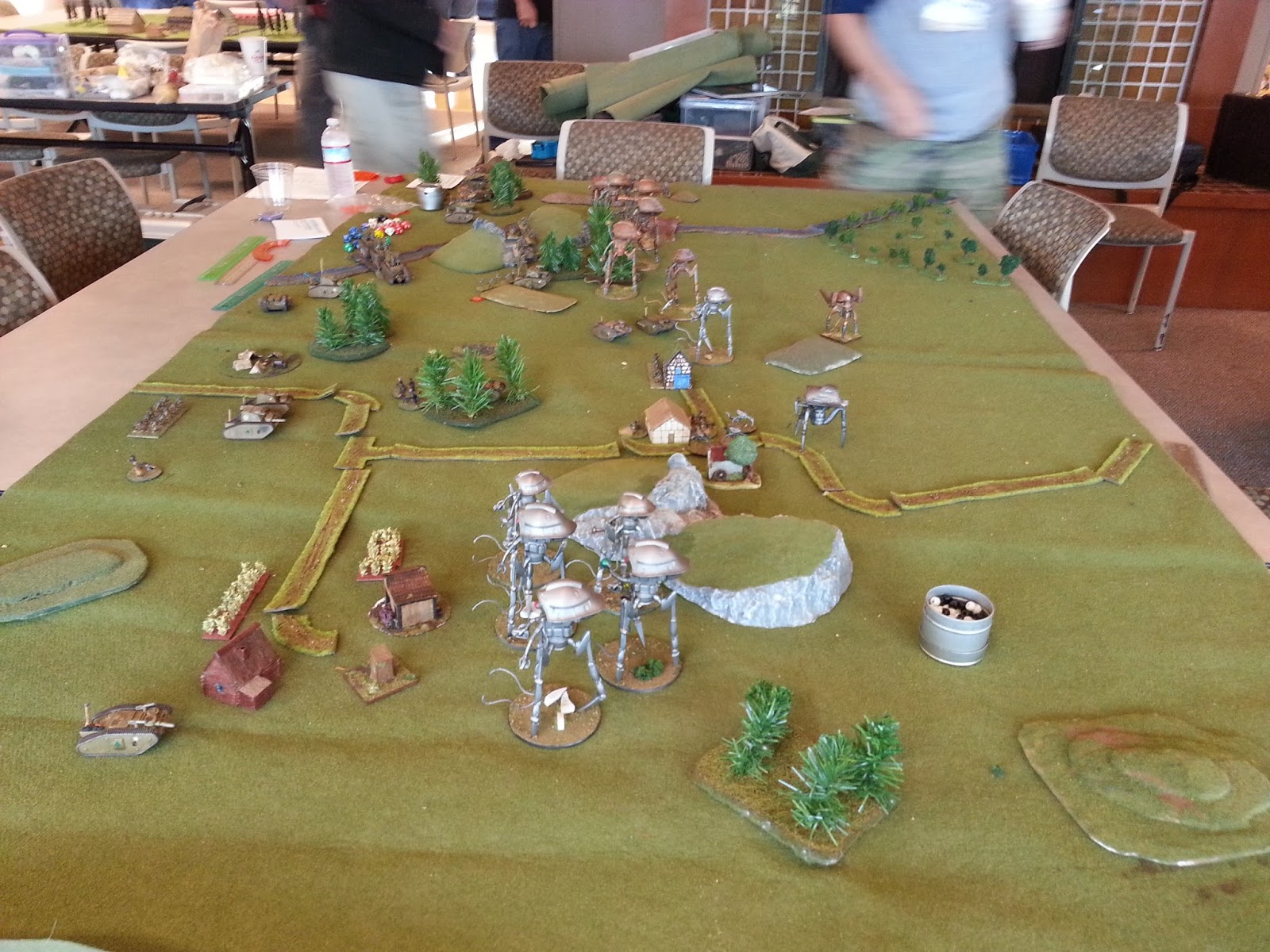 This was another Saga setup with a really nice fort. 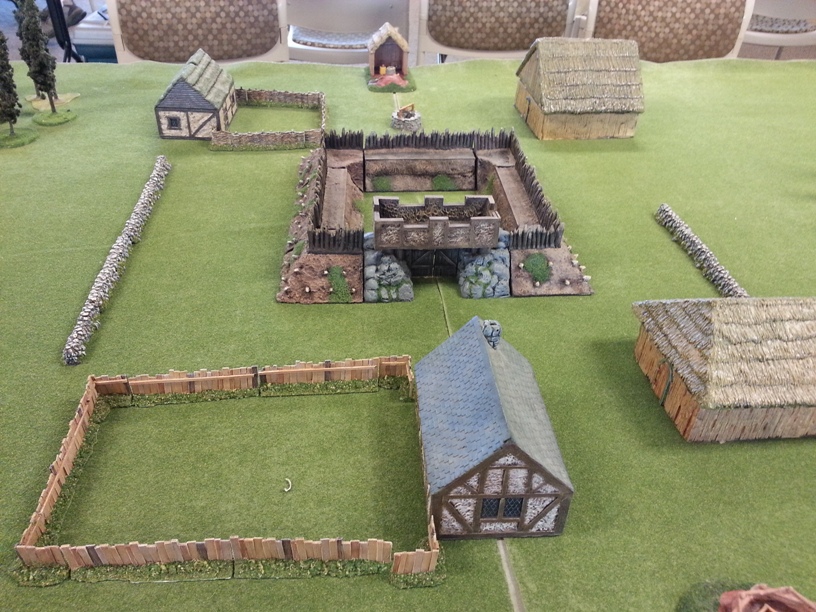 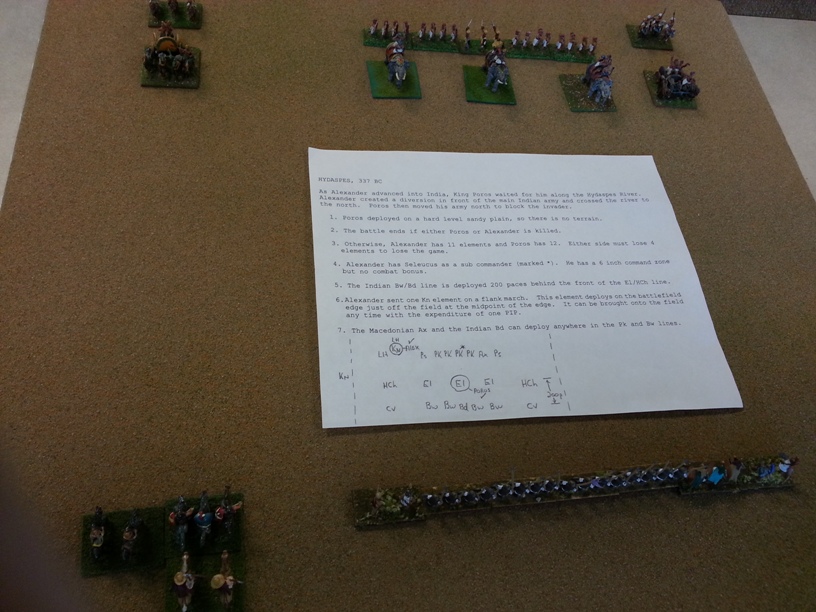 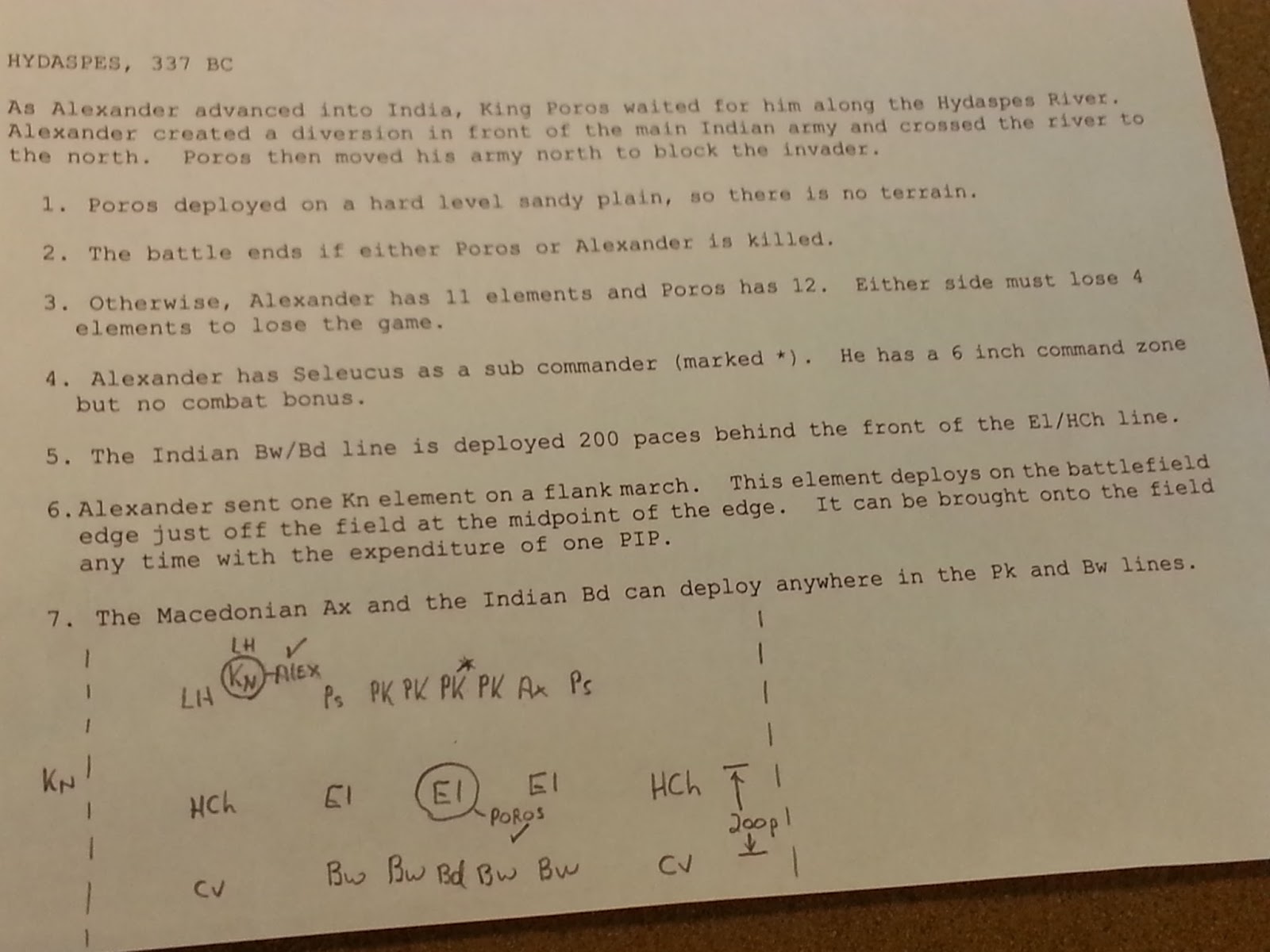 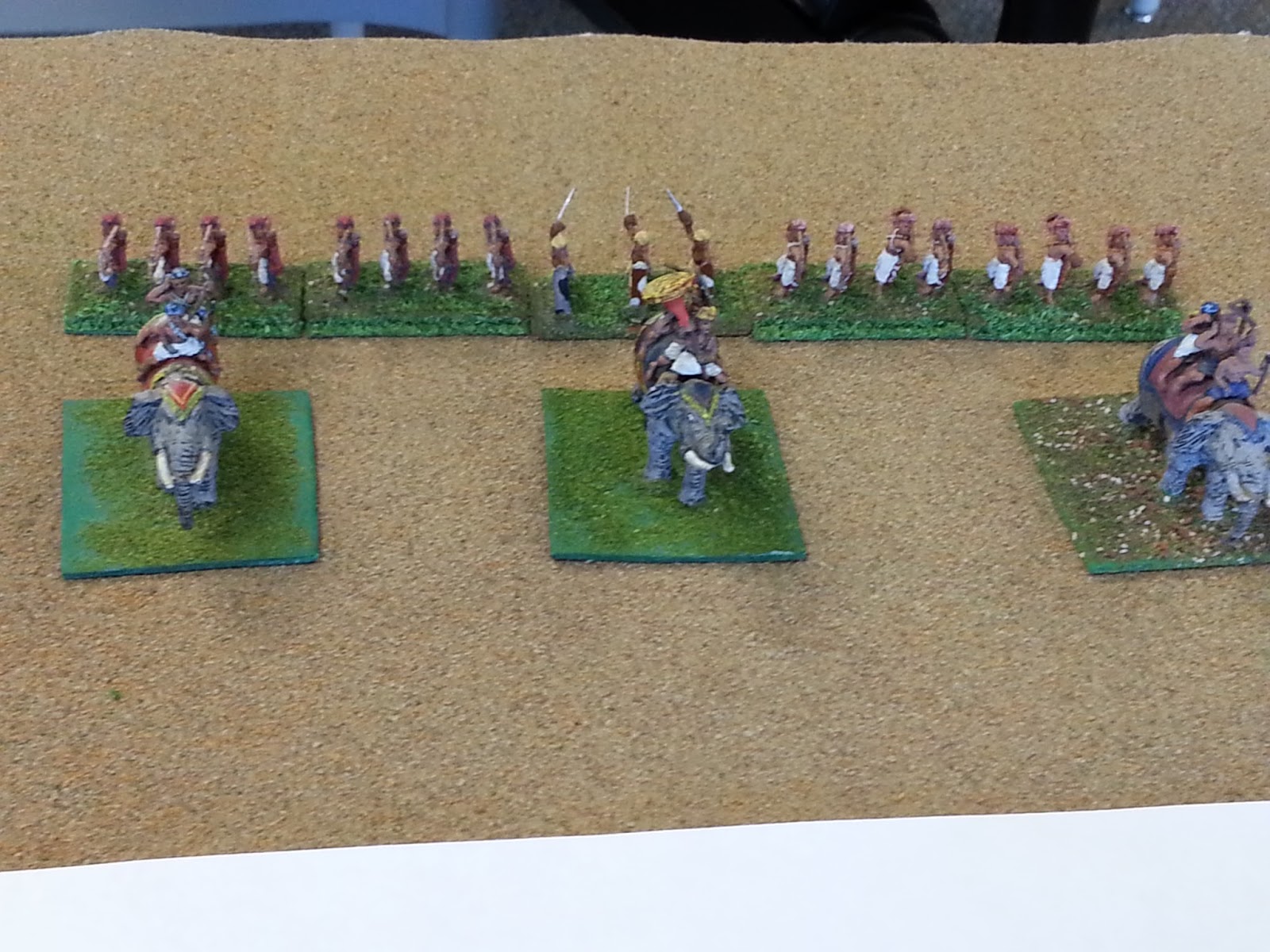 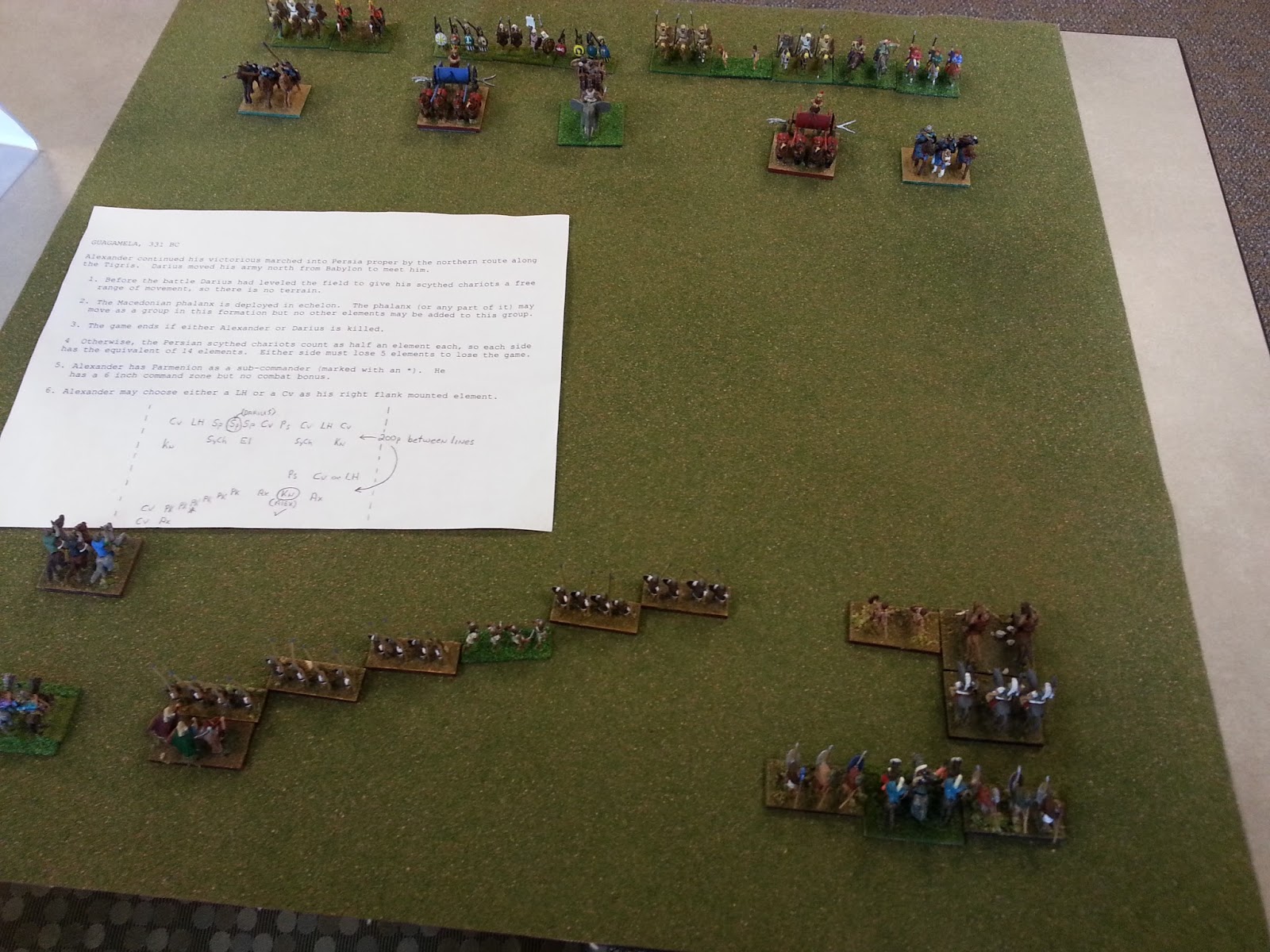 When they asked me in the morning to run a game for the second period after lunch I just wasn't sure there would be enough interest, and I didn't want to just sit there waiting for someone to join the game (as I said there just weren't that many people there). I wanted to play not sit. So I put out my Spanish and Dutch fleets with my island terrain on a vacant table to see if there was any interest generated, if there was I would consider running a 2nd period game of KMH. There wasn't in the game, but there was in the ships. I got a lot of nice comments on both the ships and the islands.

One of the vendors at the convention, William Werts of Wizard Kraft Terrain, http://wizardkraft.com/Terrain/, began asking around who's ships were on the table. Someone pointed him in my direction. He asked if he could use my ships to display his shoreline terrain and take photos for his website. I was playing Saga with Sven at the time so I told him I would bring them over after the game. Like I said, it didn't take Sven long to destroy me.

Wizard Kraft makes beautiful terrain mats. Each 12" x 12" mat is individually molded and can be fitted into any number of configurations. They even have a range of 2"-8" river mouth 12" x 12" tiles that can be added to any shoreline. The really cool thing is that his water color is exactly the same as my ship bases. They also make various river, bog, hill, road and other terrain pieces. All very thin, very light, and very strong. Both William and his lovely wife Sarah do all the work themselves. Very impressive! I wish I had more photos of their stuff. Almost every table had their terrain on it. I think only the Legos Pirate and WWII Naval tables did not. Hopefully they will have more photos on their website soon. 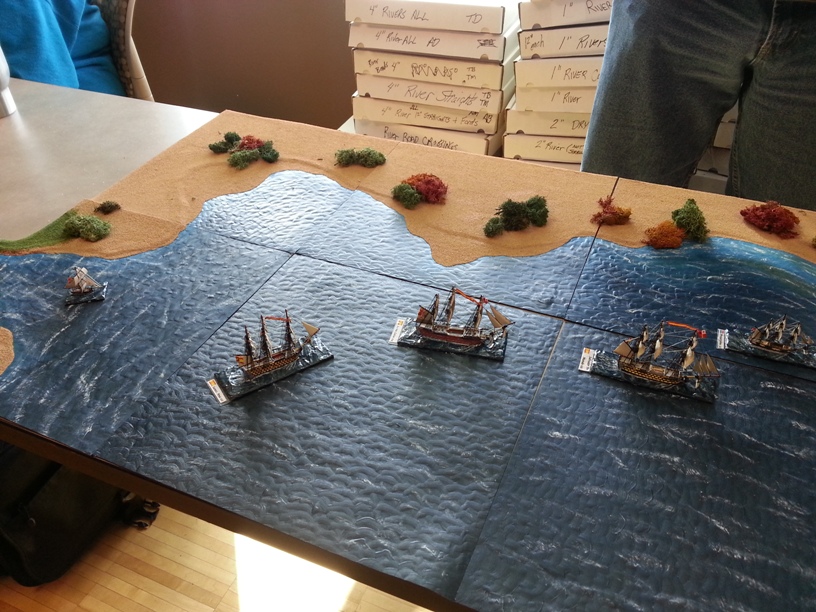 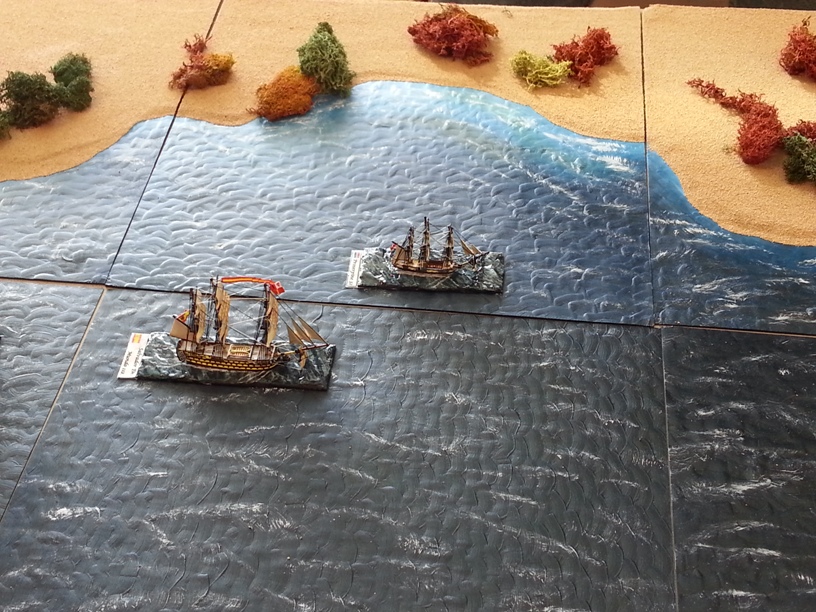 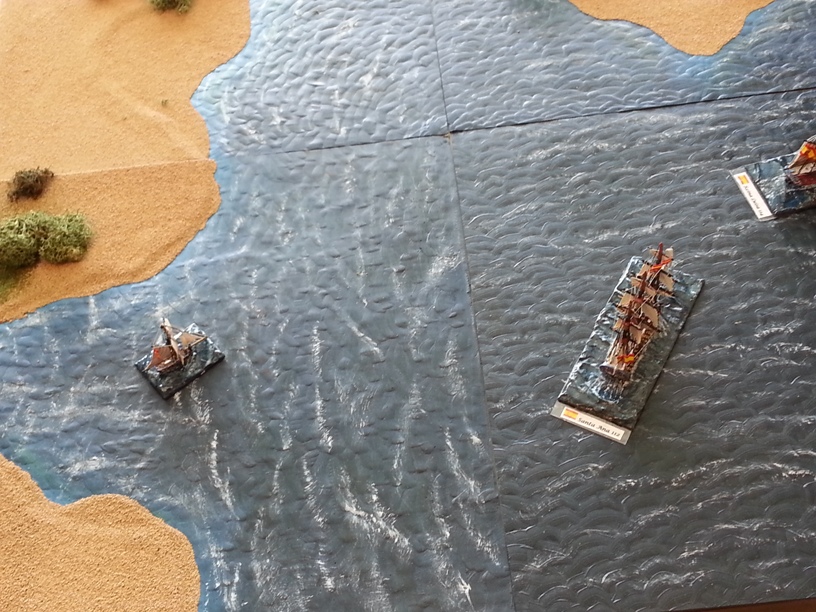 Even though it wasn't all I had hoped for, I did have a good time and met a lot of good people.

Posted by A Miniatures Hobby Room at 10:25 AM No comments: