Fairwell to a Good Friend

My good friend, mentor, and shipmate Rory McCreadie lost his long fight with cancer yesterday afternoon. He went in his Lady Jane's arms as he wanted. 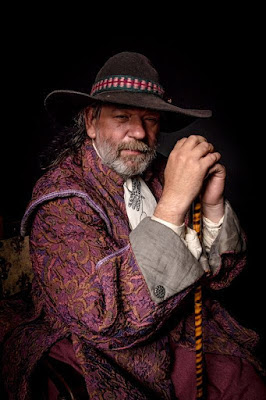 Rory had been working hard over the last several months to finish all of the ships at Trafalgar in 1/2400 scale for a game that was scheduled for October 21, Trafalgar Day and his birthday. He told me he had realized he would be in too much pain to play but hoped to watch his ships in play. A few days ago Jane sent me pictures of his last 3 ships almost done. He was too weak to type so he asked her to e-mail me.


Yesterday evening Jane let me know he was gone and asked if I would spread the word among the wargaming community. Along with a few others, I have done so where I could excepting TMP where I can't.

I don't know if many were aware that Rory was a barber-surgeon and traveled around the UK doing historical demonstrations at schools, faires and reenactments. He also authored a book on the subject.

Rory had the biggest heart of anyone I know and was generous to a fault. When I was just getting started building ships he pointed out (gently) that I was getting the rigging wrong. He didn't know me yet and still paid for and sent me Rod Langton's Rigging Guide book! Over the past six years he continued to gift me, not only with books he thought I would like including his own, but also with his knowledge and experience. He authored building and rigging guides for 1/1200 ships and allowed me to post them on this site. They still have the highest number of views out of all the posts on my blog.

Rory McCready, you were a prince among men, you had a generous soul, but most of all you were my friend. You are sorely missed!
Posted by A Miniatures Hobby Room at 11:39 PM 10 comments: