The hull of this model is the GHQ French 74-gun ship of the line L'Achille. I used the Langton brass 74 full scale sail & mast set for it. I actually started this ship back in April this year, but got distracted with life over the spring and summer and to tell the truth, just lost interest in the shipyard. I started working on it again here and there starting the end of September. A couple of days ago I tweaked my back so had to spend some down time which I took advantage of to finish L'Achille.

The following information is taken from the book "The Ships of Trafalgar - The British, French and Spanish Fleets - October 1805":

Designed by Jacques Noel Sane, Achille was laid down at Rochefort and launched in 1802. Her sister ships at Trafalgar were Aigle, Duguay Trouin, Heros, Mont Blanc, Redoubtable, and Scipion. On October 19, 1805 Achille made sail with the rest of Villeneuve's ships, and by 1 p.m. had cleared Cadiz. The next day Achille was place in the second division of Admiral Gravina's observation squadron, which led the entire fleet to the southwest. At 6 p.m. on the 20th Achille signaled Bucentaure (80) that 18 British sail of the line were bearing up on the rear of the column. When Villeneuve ordered the fleet to wear at 8 p.m. on the morning of the 21st, Achille was fourth from the rear fo the combined fleet. Ahead lay San Ildefonso (74), astern Gravina's flagship Principe de Asturias (112).

Achille got into close action at 1:30 p.m. when she maneuvered across the stern of HMS Belleisle (74) firing a broadside into her quarter. She was supported by Aigle (74), San Leandro (74) and San Justo (74). At 3:30 p.m. Achille received a raking broadside through her stern from HMS Swiftsure (74). Swiftsure then drew up on the larboard side and commenced pouring broadsides into Achille. Her starboard side was simultaneously being engaged by HMS Polephemus (64). Her wheel was shot to pieces and she lost her fore yard, main topmast and mizzen mast. Her commander Gabriel Denieport was killed, leaving Lieutenant Cauchard in command. At 4 p.m. HMS Prince (98) ranged up alongside and fired her heavy broadside into Achille, bringing down her main mast. Fire broke out in her fore top setting fire to the sails and rigging. A second broadside from Prince brought the flaming foremast down, destroying the boats in the waist and also smashing the fire engine pump. With little chance of saving his ship, Lieutenant Cauchard ordered the sea cocks to be opened to flood the ship and to jettison anything overboard that would aid those abandoning ship. While all ships hauled off to avoid the imminent explosion when the fire reached Achille's magazines, they lowered their boats to pick up survivors leaping overboard. Inside the inferno a woman named Jeanette, wife of one of Achille's maintopmen, ran from her station in the passage from the fore magazine. With most ladders smashed she found herself trapped. Guns and burning debris were falling through as the planking of the main deck above burnt through. Scrambling over wreckage, overturned guns and dead, Jeanette made her way to the gun room and climbed out through a stern port. Climbing on to the rudder Jeanette found herself being dripped upon by molten lead oozing from the lining of the rudder helm port. Stripping off her cloths she plunged into the water and clung to some wrekage until rescued by one of Pickle's boats. Achille became a blazing inferno and by 5:30 p.m., with a tremendous explosion she blew up. 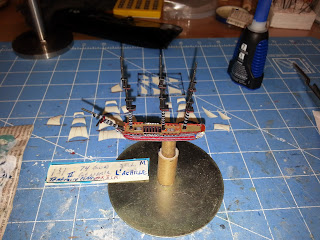 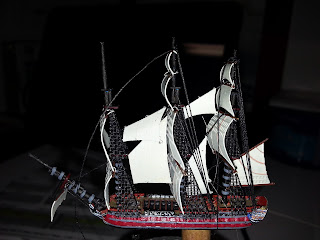 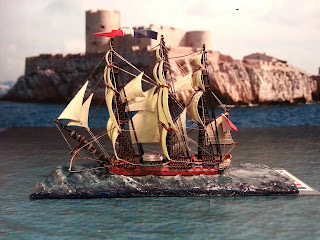 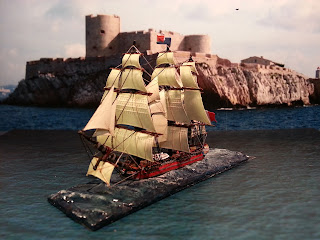 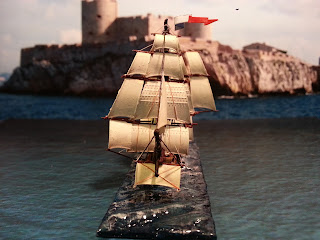 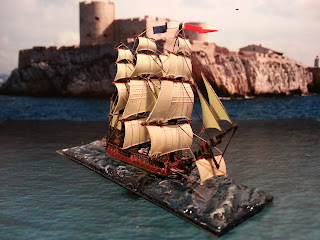 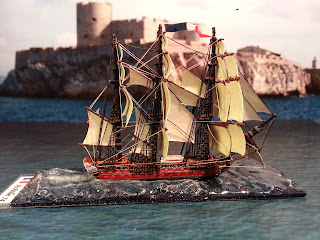 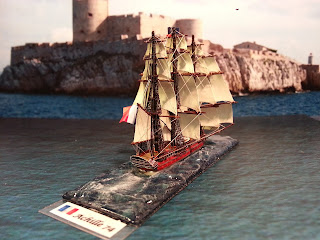 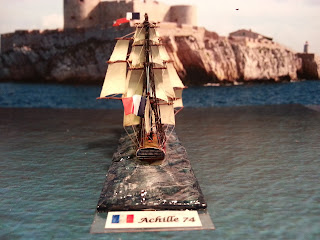 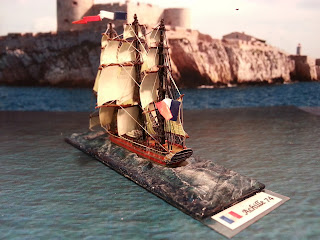 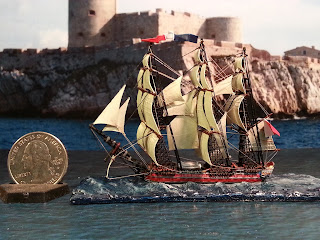 Posted by A Miniatures Hobby Room at 2:50 PM 6 comments: