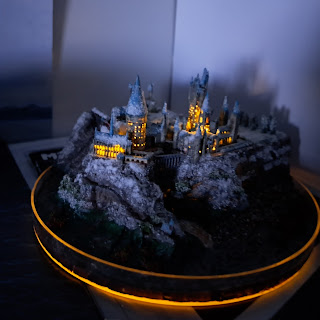 I decided to take a short break from building ships to make another Hogwarts diorama for one of my daughter's upcoming birthday. This time a small one, only 7-inches in diameter, lighted, and in winter. The basic castle is a 3D print, hollowed out using various drill and Dremel bits. Drill bits didn't work very well for the window holes, so I used a small heated wire to punch through the hard plastic walls. Not all of the buildings are lighted, just the ones I could reasonably get to. The surrounding land and lake bottom is sculpted from foam. The lighting is a 20 count fairy light string powered by two 3V wafer batteries mounted underneath with a switch. The lake is poured resin. The covered wooden bridge, standing stone circle, and Great Hall courtyard palisade and roof are scratch, as well as all of the flocking and shrubbery. Pine trees are painted pipe cleaner bits, and the Whomping Willow is made from twisted wire and foam flocking. 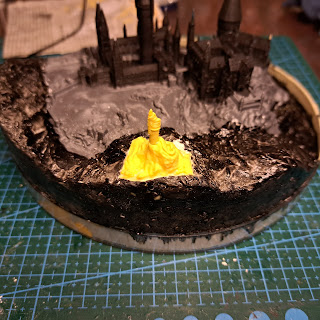 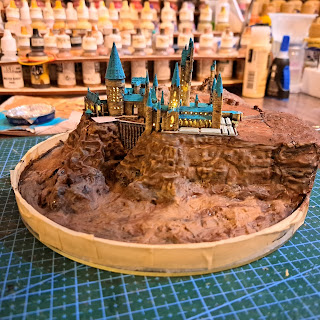 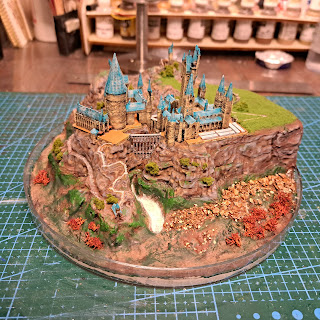 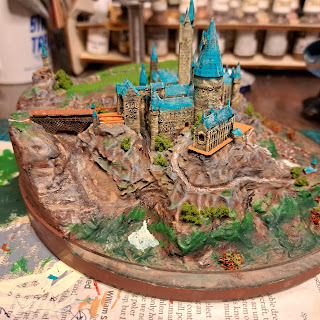 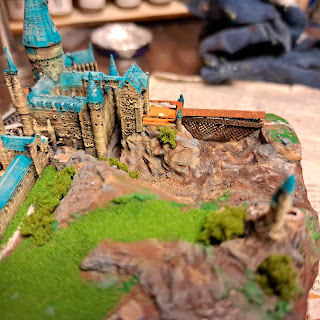 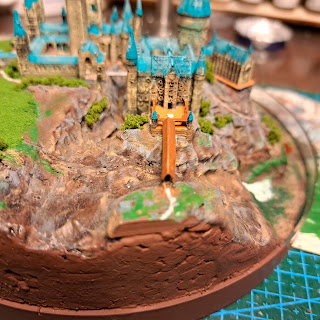 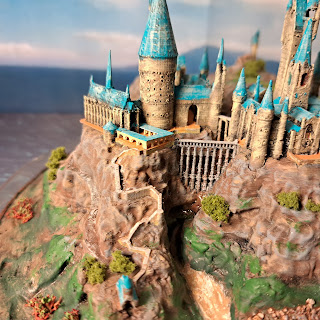 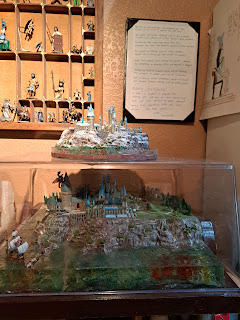 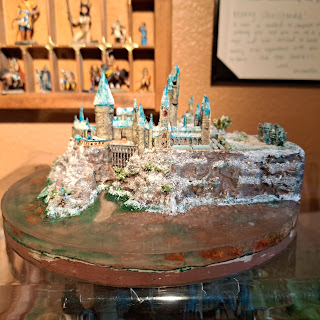 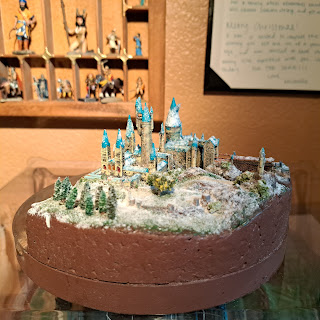 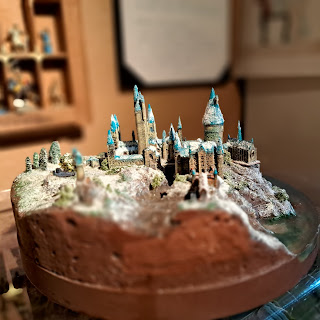 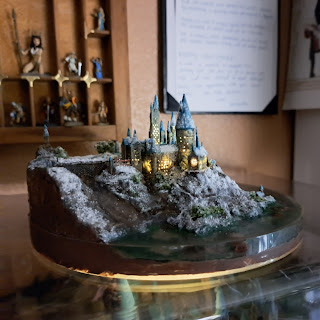 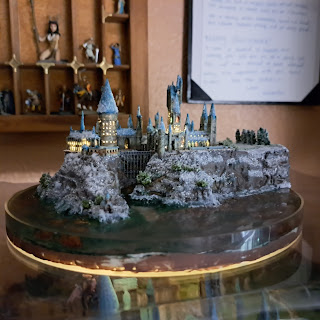 I have ordered some gold leaf to treat the lakebed contours and rear of the model base at the request of my daughter, so there may be an update post on this.

Posted by A Miniatures Hobby Room at 4:24 PM 4 comments:

Email ThisBlogThis!Share to TwitterShare to FacebookShare to Pinterest
Labels: Diorama 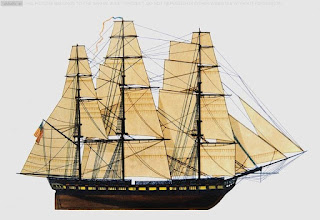 The last built of the original Six Frigates authorized by Congress on 27 March 1794, President was built by Christian Bergh, East River, New York. Launched 10 April 1800, she sailed from New York on her first cruise on 5 August 1800, Commodore Thomas Truxton commanding.

President was the flagship of Commodore Richard Dale in the Mediterranean during the first Barbary War 1801-1802, and again in 1804-1805, participating in the actions against Tripoli.  She cruised off the eastern coast of the United States from 1809 to 1812. She sailed from Annapolis, MD on 12 May 1811, met and fired on HMS Sloop Little Belt of 22-guns.

President sailed from New York on 21 June 1812 with United States, Congress, Hornet, and Agnes on a cruise in the North Atlantic.  Two days later she fell in with HMS frigate Belvidera, and after a running fight of 8 hours, Belvidera escaped.

She sailed from Boston on 30 April 1813 for a cruise off the coast of Europe. on 23 September she captured HMS schooner Highflyer of 5 guns off New York and arrived at Newport, RI 27 September 1813. She sailed from Providence 4 December for a cruise to the West Indies, returning to New York 15 February 1814, and was blockaded there for almost a year by a British squadron.

She sailed from New York 14 January 1815 under Captain Stephen Decatur, and the next day was captured by British ships Endymion, Majestic, Pomone, and Tenedos.

President was taken into the Royal Navy, and was broken up just two years later at Portsmouth in 1817.

This model is another of the Warlord Games Black Seas resin cast models. The only other parts of the WG kit I used are the two furled sails I cut from the metal masts, and the two anchors. The ships boats are 3D prints. Masts, spars, sails and base are scratch built. 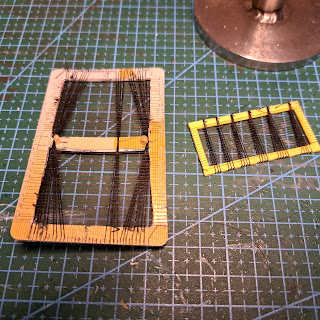 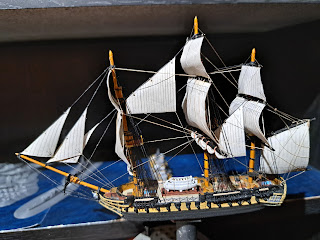 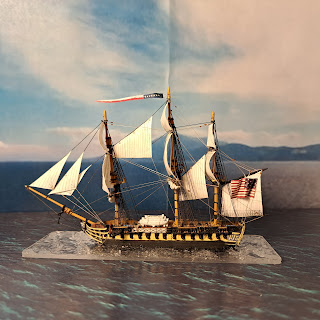 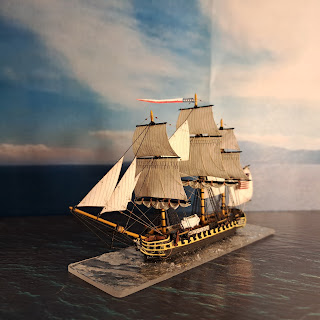 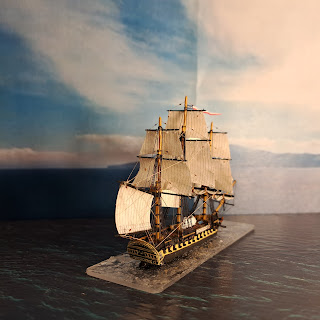 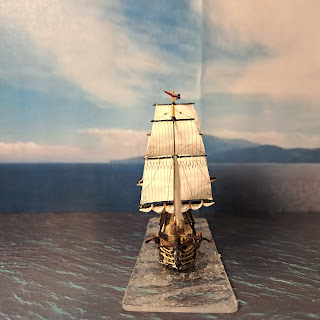 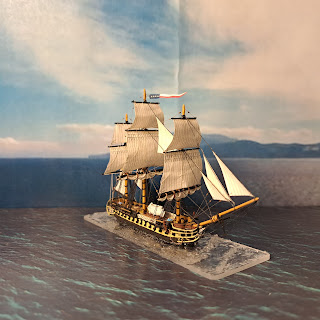 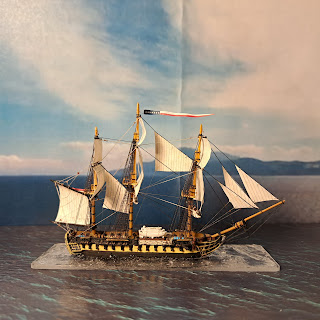 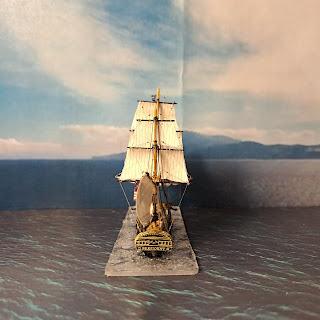 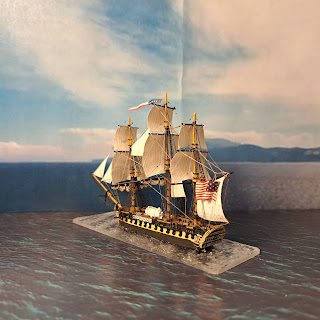 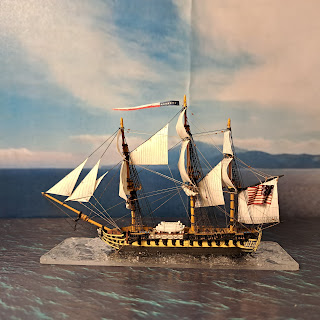 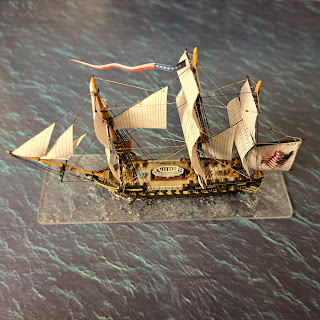 The last one to do is Constitution 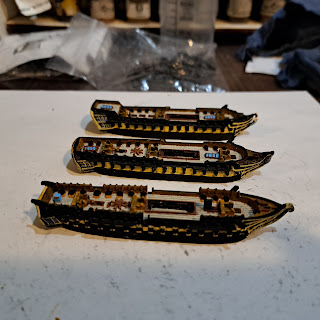 Posted by A Miniatures Hobby Room at 7:15 PM 4 comments: