It has been awhile since I have done anything in the shop. I have developed a ship block for some reason I can't explain. I started HMS Bellona back in September, and got the the masts and sails scratch-built and hull partly painted. Then I went back to work. When I came home I went to Tactical Solutions. After that I would come down to the shop, pick up Bellona, and put her back down. It just wasn't there. No urge, no desire, nothing! And it has been like that ever since. I have tried to fill in the blog with posts of my friend Rory's great stuff until this block disappears and I can post my own stuff again.

So the other night I had a thought that maybe I should try something other than a ship, maybe that would break the block. And besides, I thought, I haven't done my self imposed annual requirement to produce at least one piece of terrain. So I decided I needed another fort. Not one attached to an island or shoreline this time, but a small one I could move around like Rory did with his Toulon Tower. The main part is just a plastic bit I pulled out of my "parts" bin (I save all sorts of odd bits, drives my wife crazy, but you never know when you might need something), probably off of some sort of bottle or package. I filled it with wood putty almost up to the edge and let it dry over night. The next evening after the filler was dry, I cut a 4mm strip of card stock, then measured and cut off 4 bits to fit the wall. I super glued them to the wall at 4 equidistant points for abutments, then coated them with PVA glue. Then I cut a 1mm strip of thinner card. I cut that into 3mm sections and glued them around the inside wall for gun carriages, Then I cut 0.020 gauge music wire into 3mm sections for the cannon and glued them to the card carriages around the wall. Whle the super glue dried I used an exacto knife to "press in" the block lines into the 4 abutments outside the wall. Then I painted it. I decided not to go gray stone this time, but more sandstone like the stone from Greece around the Levant to North Africa. It took about a full hour of time, and most of that was waiting for the glue and paint to dry to do the next part. Last I drew in the cannon ports using an ultra fine point black Sharpie permanent marker, then spray sealed it. 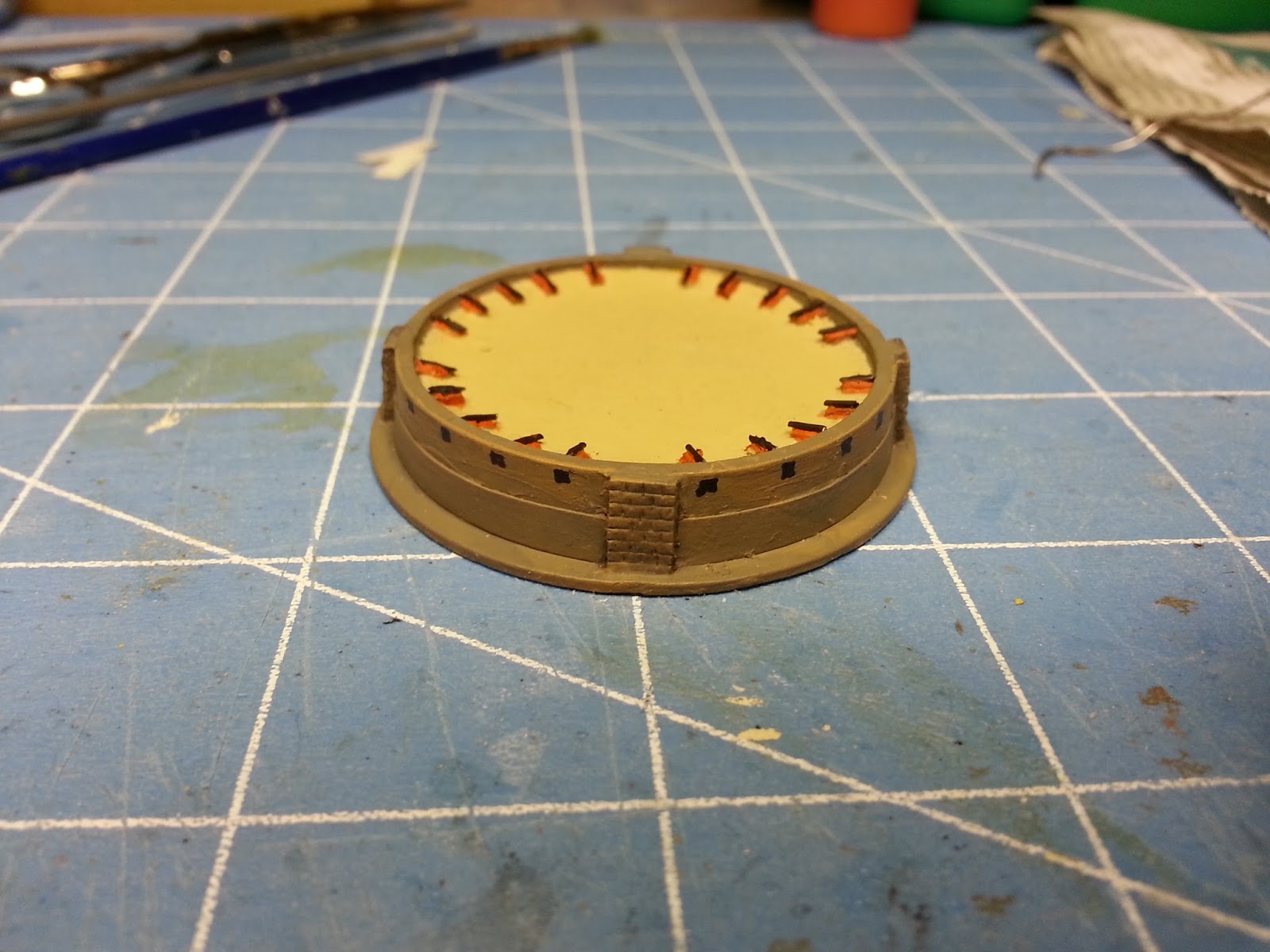 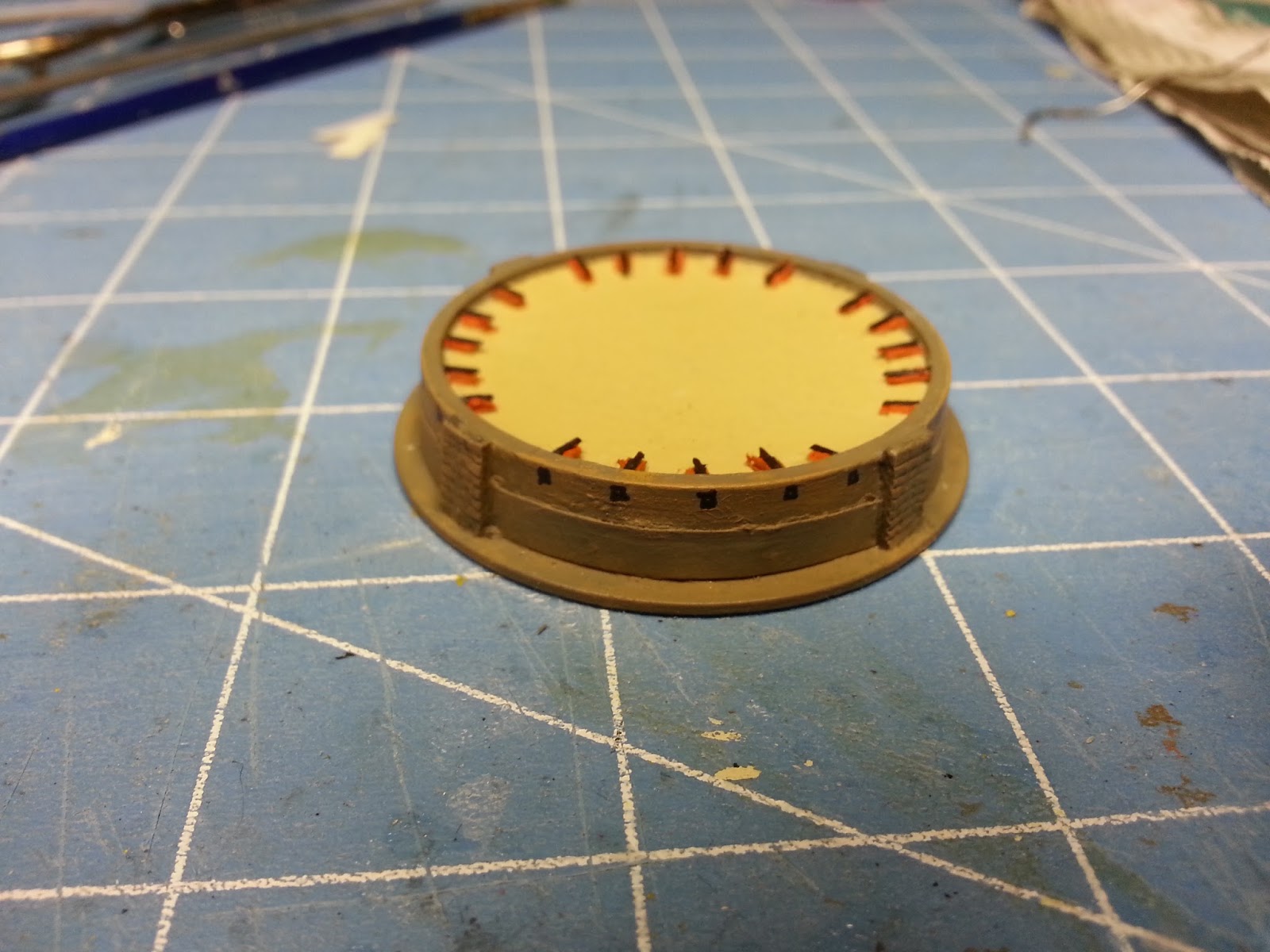 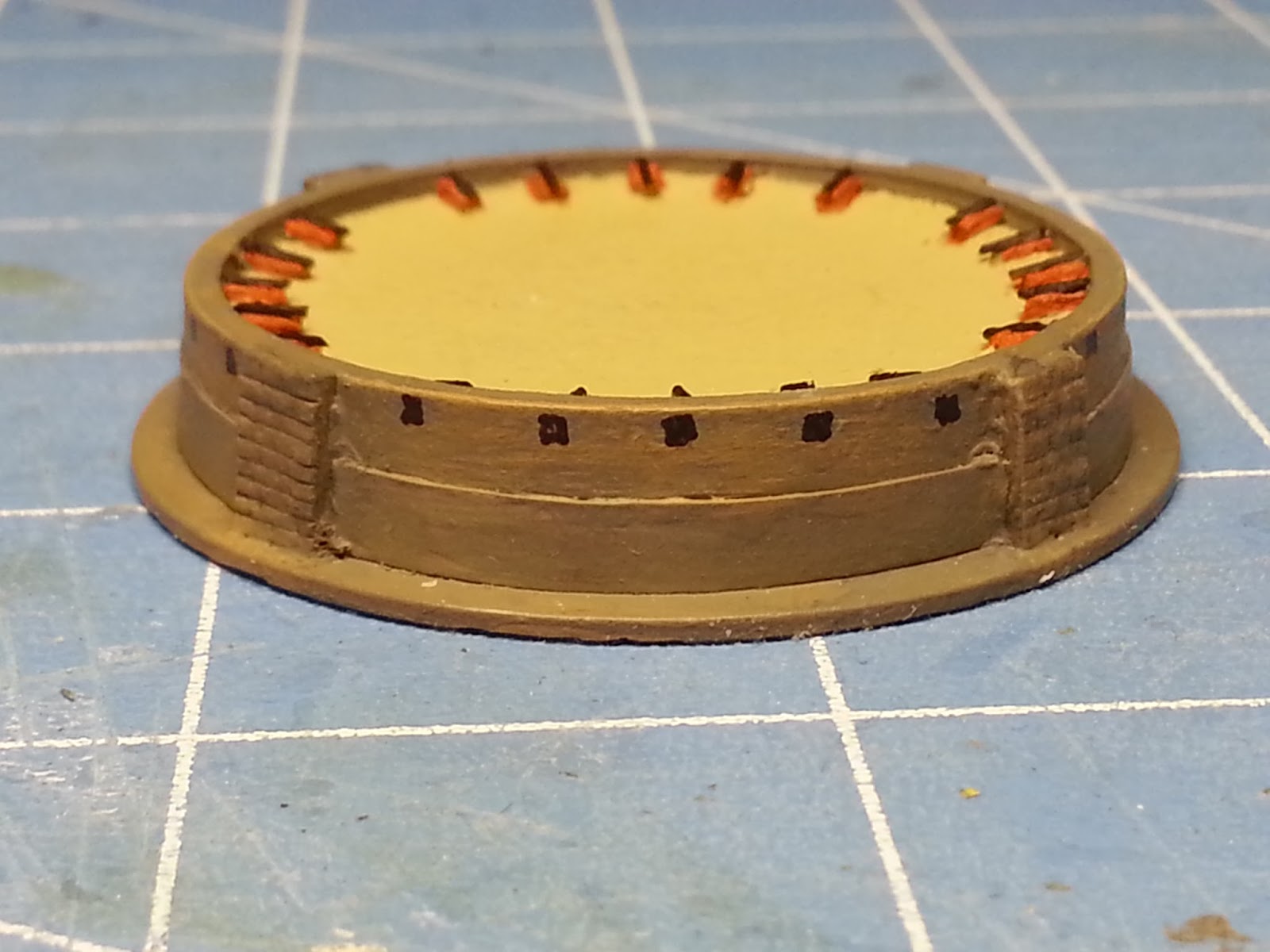 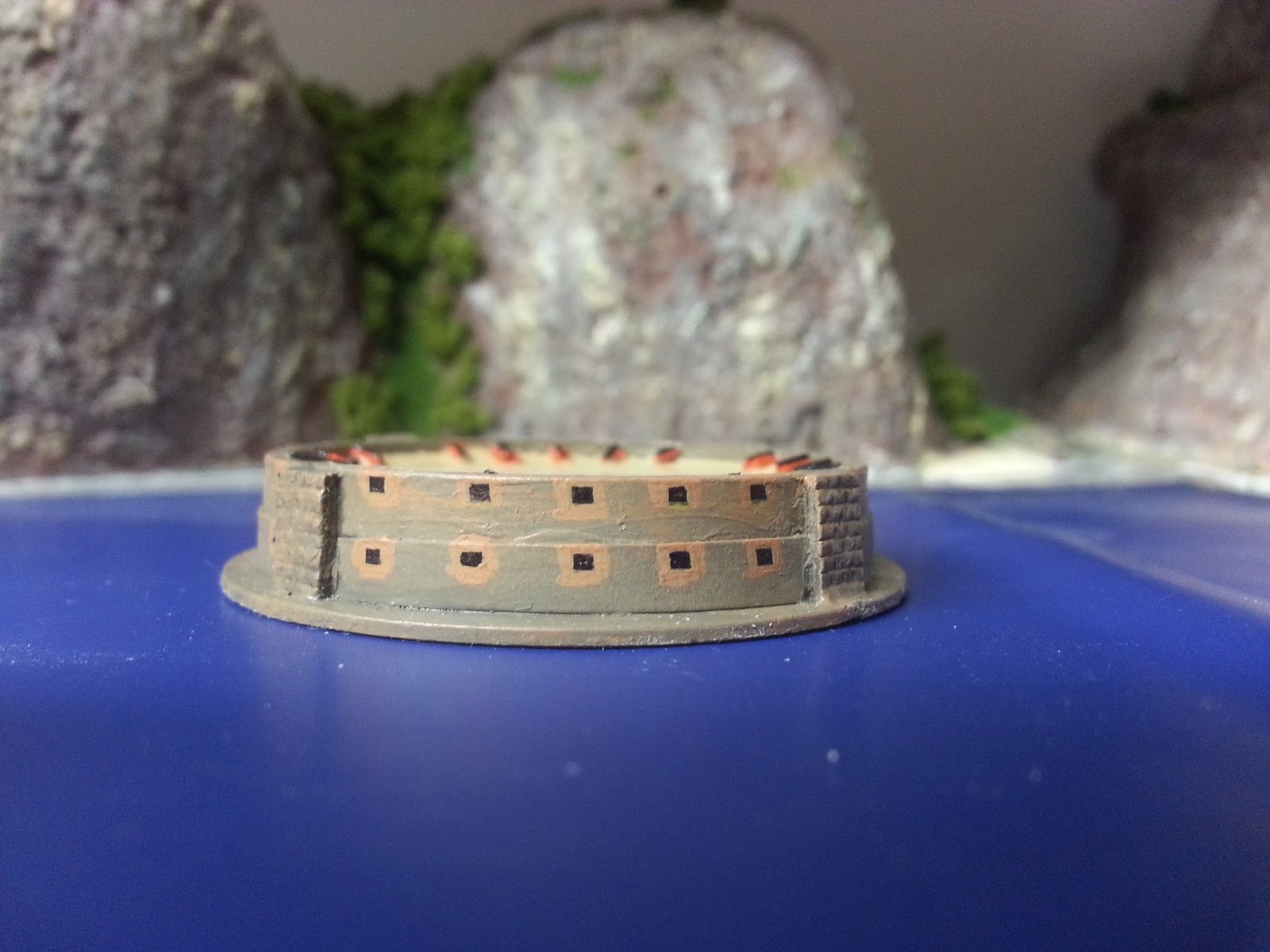 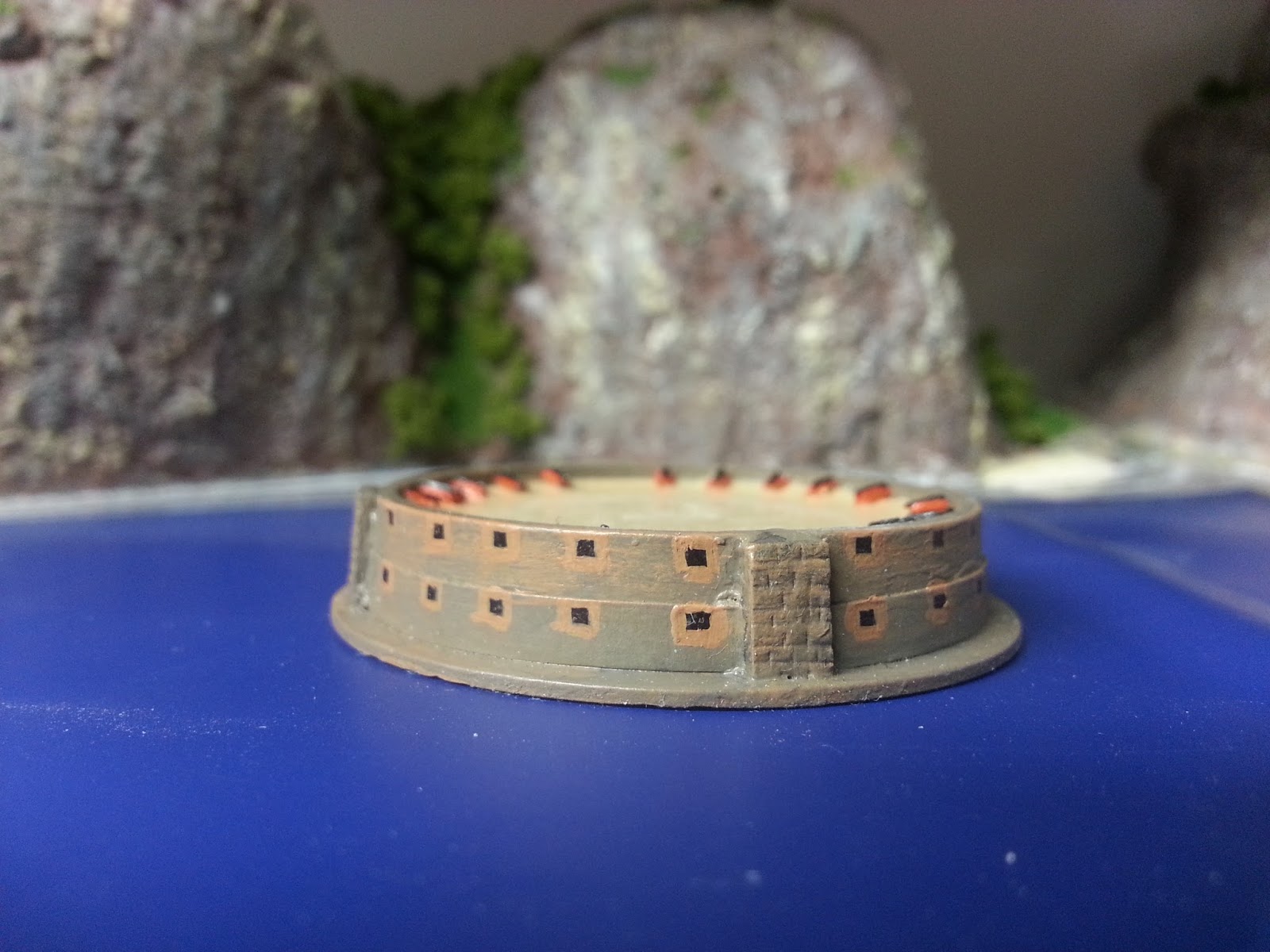 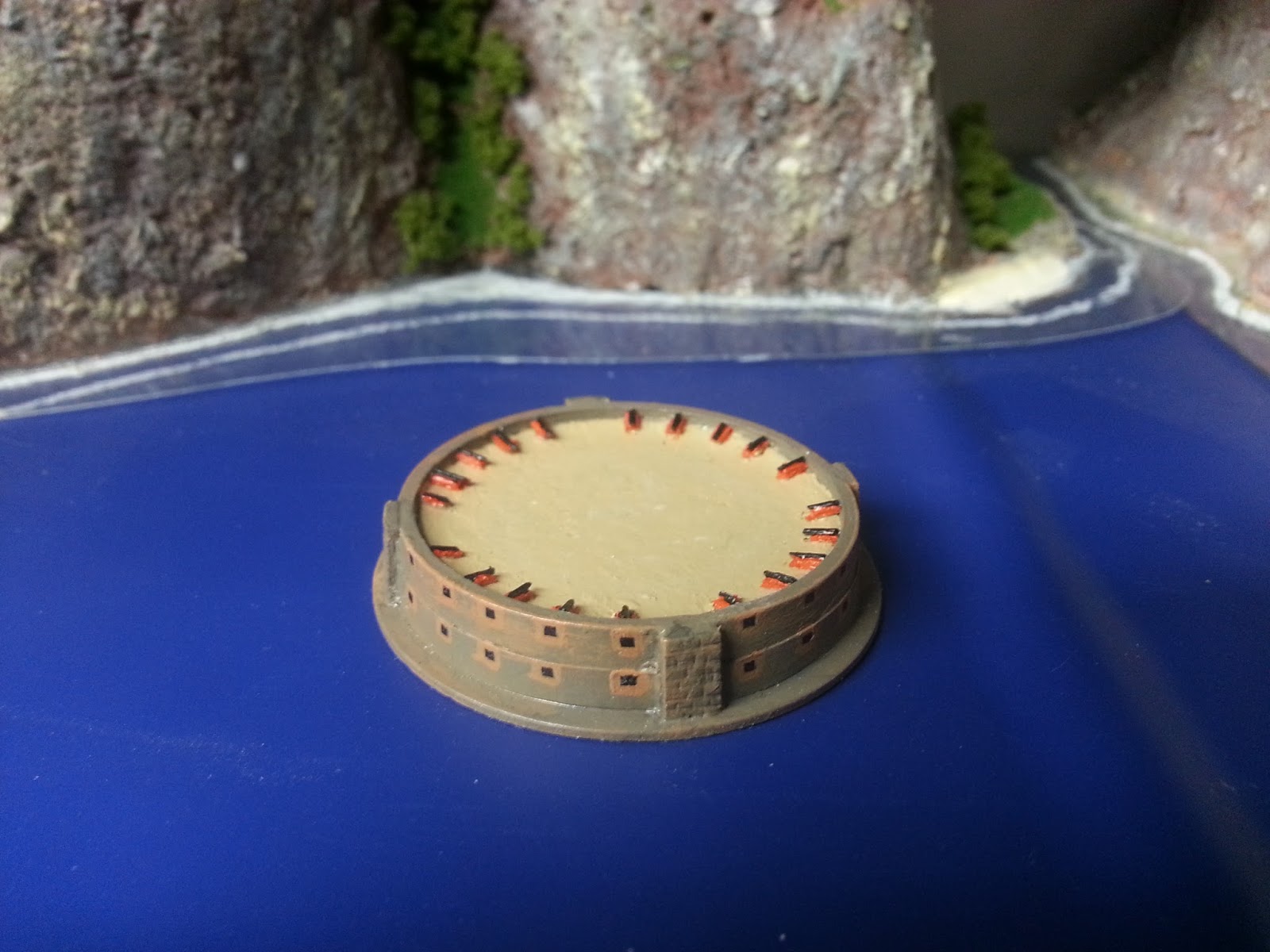 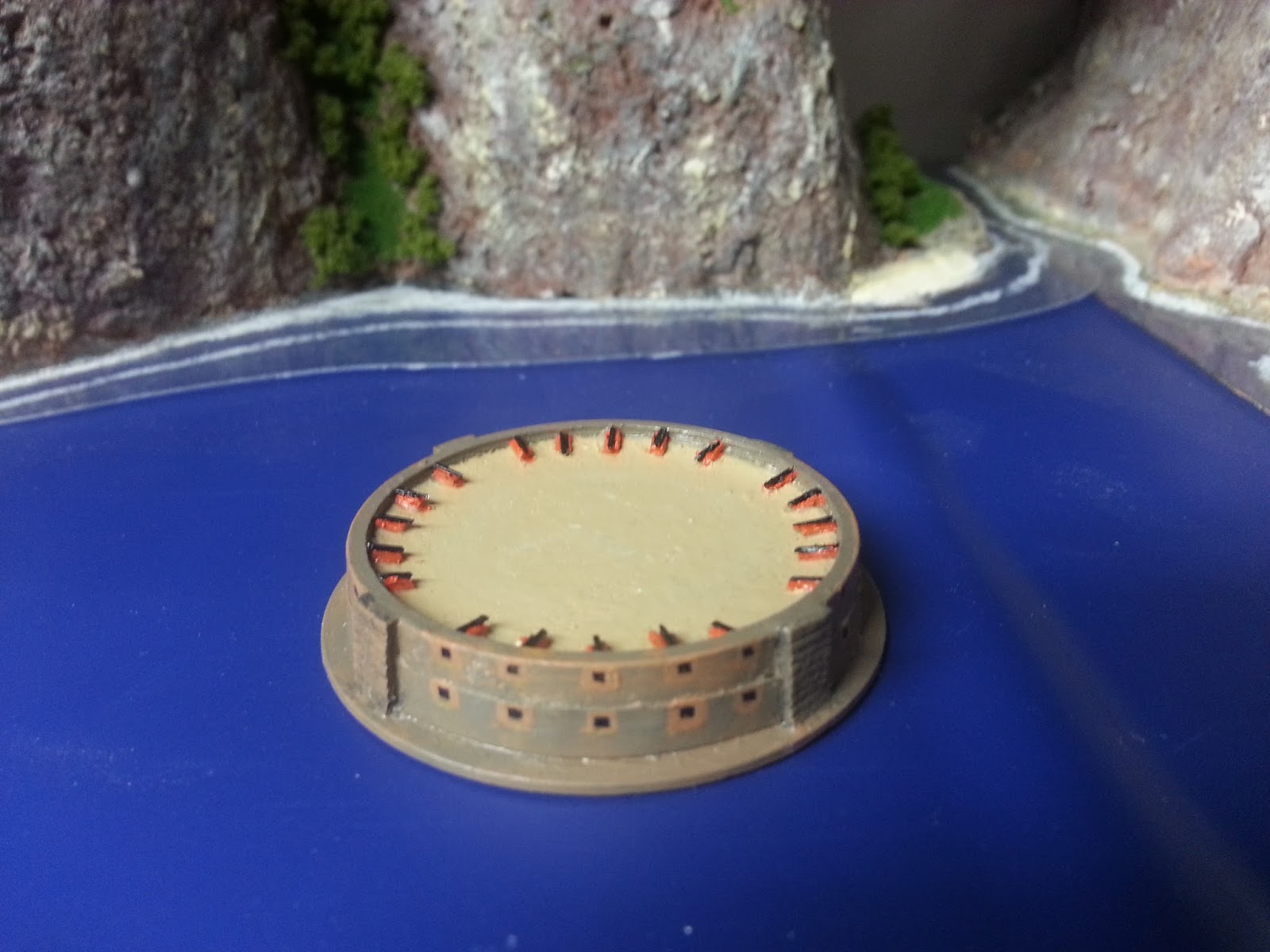 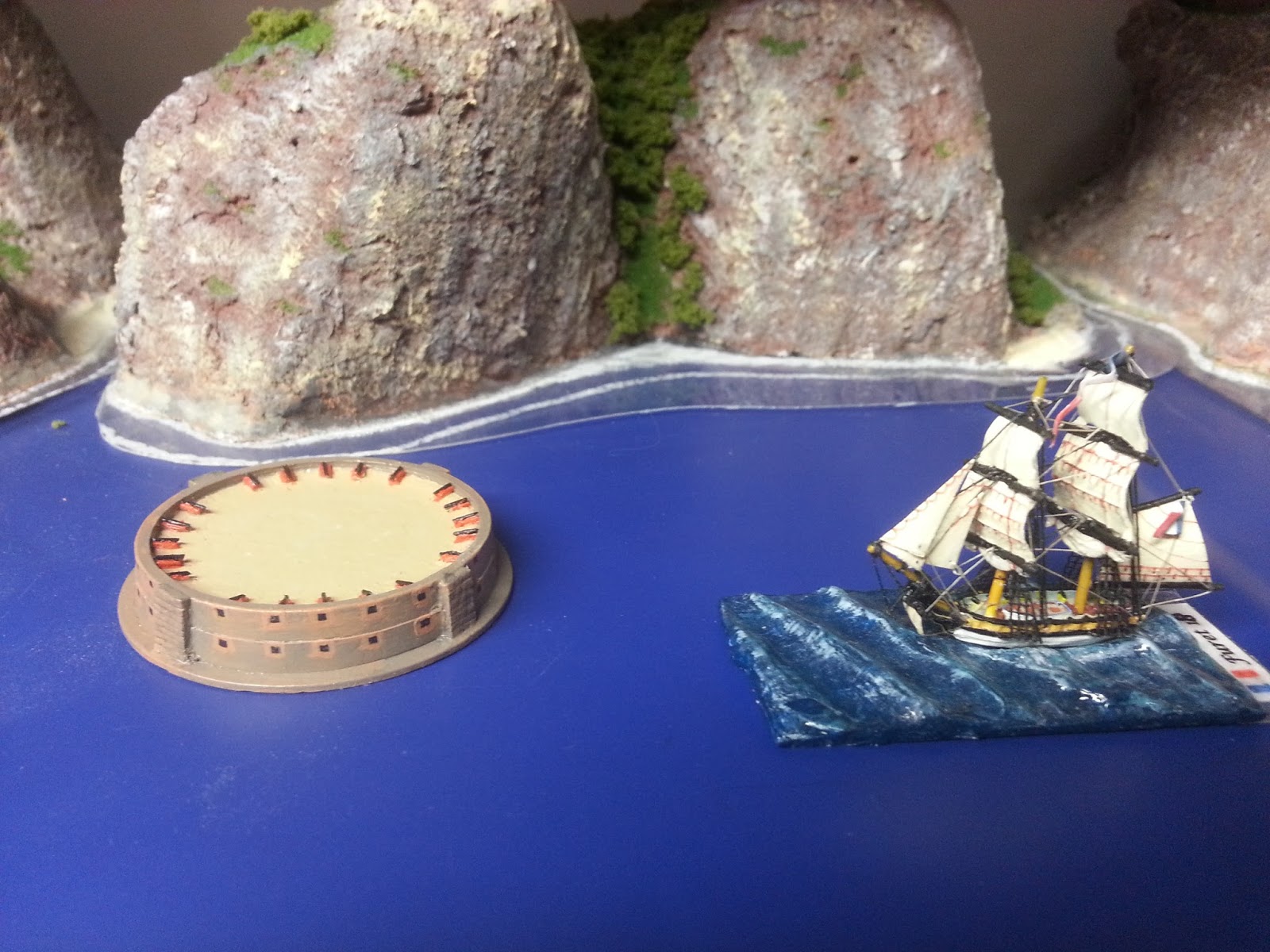 The good news is that the night after i finished the fort I was actually able to pick up the Bellona and nearly finish painting the hull and deck. I will just have to wait and see how the rest goes, but I am hoping the block is nearly gone.
Posted by A Miniatures Hobby Room at 1:46 PM

Glad to see that you are just about over 'the block' - it happens to us all.

Very nice! I wonder if I can adapt your technique for 1/2400… I'll certainly try.