Ordered on December 5 1758, Defense was built to the lines of the Arrogant class of 74 gun 3rd rate ships designed by Thomas Slade. Sister ships in the class were Audacious, Arrogant, Bellerophon, Cornwall, Edgar, Elephant, Excellent, Goliath, Illustrious, Kent, Saturn, Vanguard, and Zealous. The Arrogant and Ramillies classes were copies of the earlier Bellona class with the same design dimensions and armament, and referred to as the "74 Common".

Defense saw action on July 20 1783 at Cuddalore against Admiral Suffren's French fleet, the last naval action of the American War for Independence.

In 1793 she was deployed with Admiral Richard Howe's Channel Fleet operating out of Torbay. Detached to watch the French port of Brest, on November 18 Defense, together with four other 74's Audacious, Bellerophon, Ganges and Russell, chased off a French squadron of 10 ships commanded by Commodore Vanstabel in Cancale Bay. On May 28 Defense, deployed with Howe's squadron of 25 ships of the line, seven frigates and six other vessels, fell in with the French force commanded by Rear Admiral Villaret-Joyeuse accompanying a large grain convoy from America. Shadowing the fleet for the next few days, the main attack was made on June 1, resulting in the first British naval victory of the war of the French Revolution. Defense was the first to pass through the enemy line between Mucius (74) and Tourville (74s). She was quickly encircled and took considerable damage losing her main and mizzen masts. Falling away from these two she then received a full broadside from Republicain (110) which brought down her foremast. At this point her captain James Gambier signaled HMS Phaeton (38) to come and tow her clear. During this Glorious First of June battle Defense lost 17 killed and 39 wounded.

In 1797 Defense was one of the ships involved in the Spithead Mutiny. 19 of her seaman were sentenced to death and six others were flogged and imprisoned.

In 1798 Defense joined Rear Admiral Horatio Nelson's Mediterranean squadron off Corsica in June. Weeks of looking for Admiral de Brueys' Egyptian invasion fleet culminated in the action at Aboukir Bay on August 1 referred to as the Battle of the Nile.  Defense was the eighth in order of line and about 7 PM brought herself along side and engaged Peuple Souverain (74). Later engaging Franklin (80) Defense's broadsides brought down her main and mizzen masts forcing her to strike her colors. Defense's casualties were only 4 killed and eleven wounded.

As part of Rear Admiral Sir John Borlase Warren's squadron off Brest in 1800, Defense was involved n several boat actions. On June 10th boats from Defense commanded by Lieutenant Stamp together with boats from Renown (74), Fisgard (44), and Unicorn (36), attacked a convoy laying off Fort St Croix, Penmark Point. Under heavy fire they collectively captured three armed vessels and eight transports loaded with supplies for Brest, the remaining 20 transports being run onto the rocks. Further boat actions occurred on the 22nd when they attacked a convoy laying in the Quimper River. Forcing the French to retreat upstream, the boat crews landed and blew up a battery and other works. A third boat action by boats from Defense and Renown captured and burnt the 20 gun French corvette Therese laying in Bourgneuf Bay.

In 1801 Defense sailed to the Baltic with a large fleet commanded by Admiral Sir Hyde Parker with second in command Vice-Admiral Lord Nelson. Arriving off Copenhagen on April 1st, Defense was ordered to stay with Admiral Parker's division while Nelson presented the main attack the following morning.

On July 9th 1805 Defense sailed to join the British Squadron blockading the combined Franco-Spanish fleet in Cadiz. On the day of Trafalgar Defense lay fourteenth in line of Collingwood's leeward column so it was relatively late by the time Defense got into battle. At 2:20 she engaged the French Berwick (74). Then she engaged the Spanish San Ildefonso (74) causing that ship to strike. Defense suffered few casualties, only 7 killed and 29 wounded.

On December 24th 1811 Defense met her end in a storm. She broke up on the rocks on the coast of Jutland. Of the ship's company of 530 plus, only five seamen and one marine survived.

The preceding was excerpted and/or paraphrased from "The Ships of Trafalgar" by Peter Goodwin. 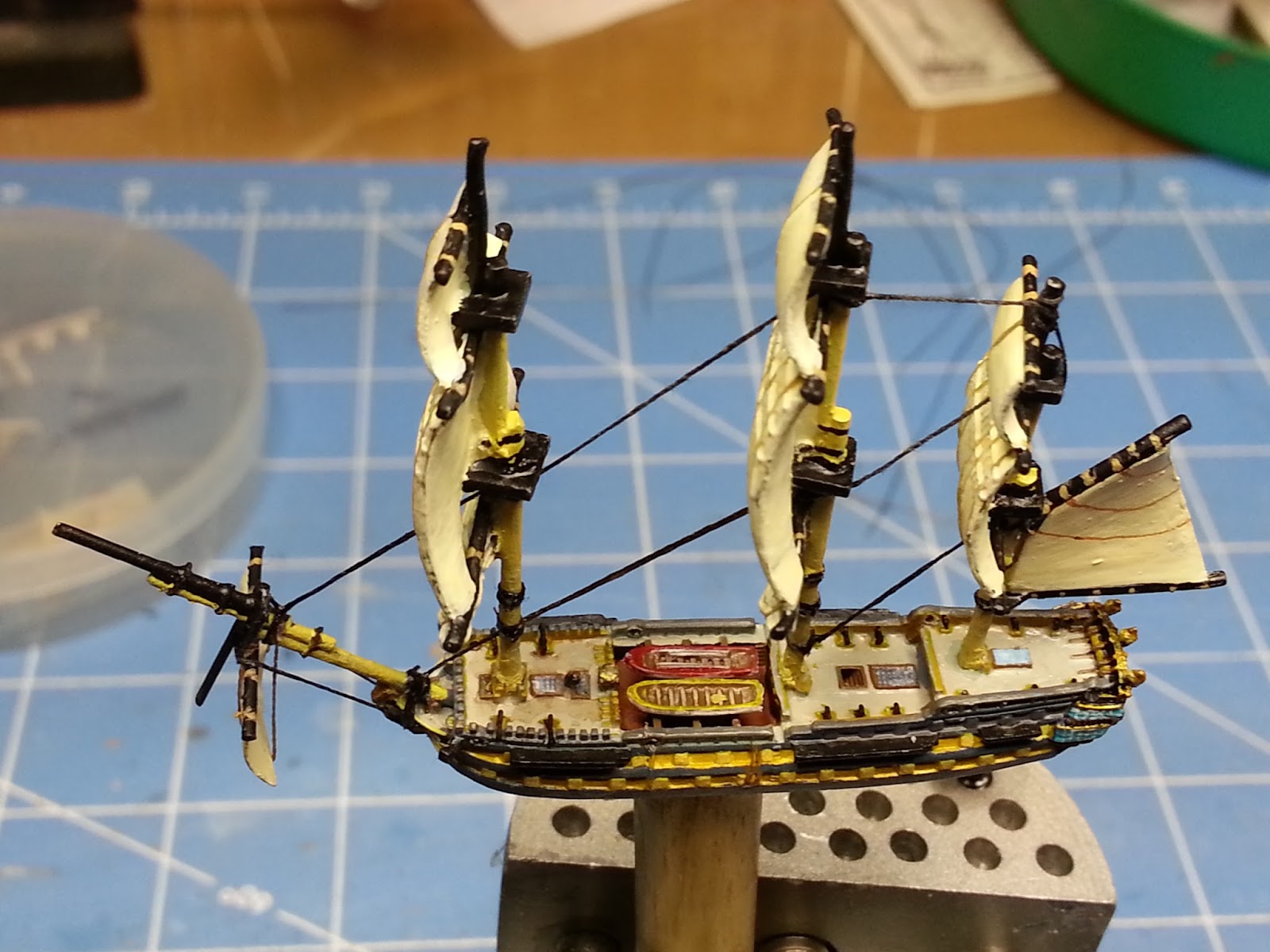 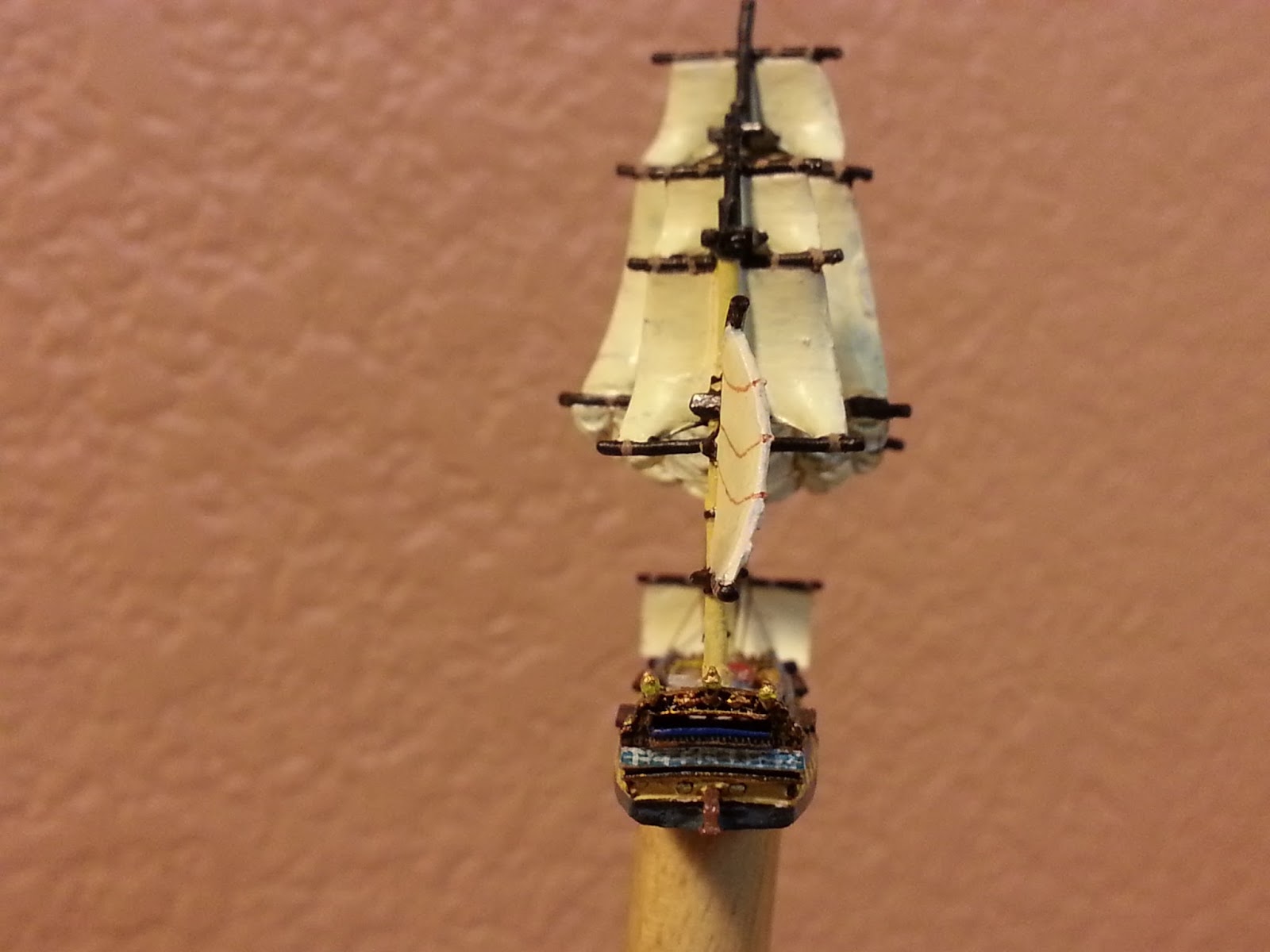 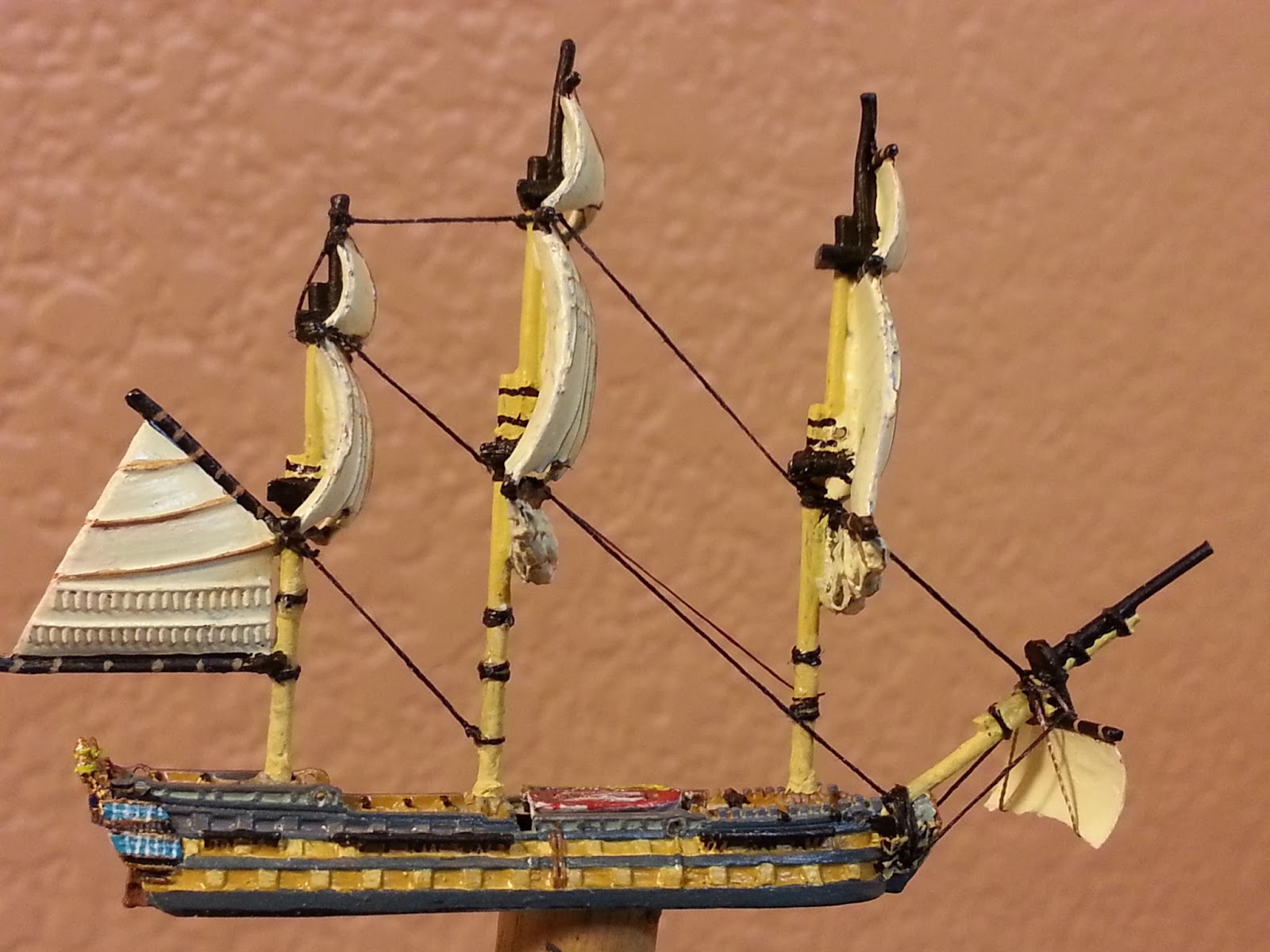 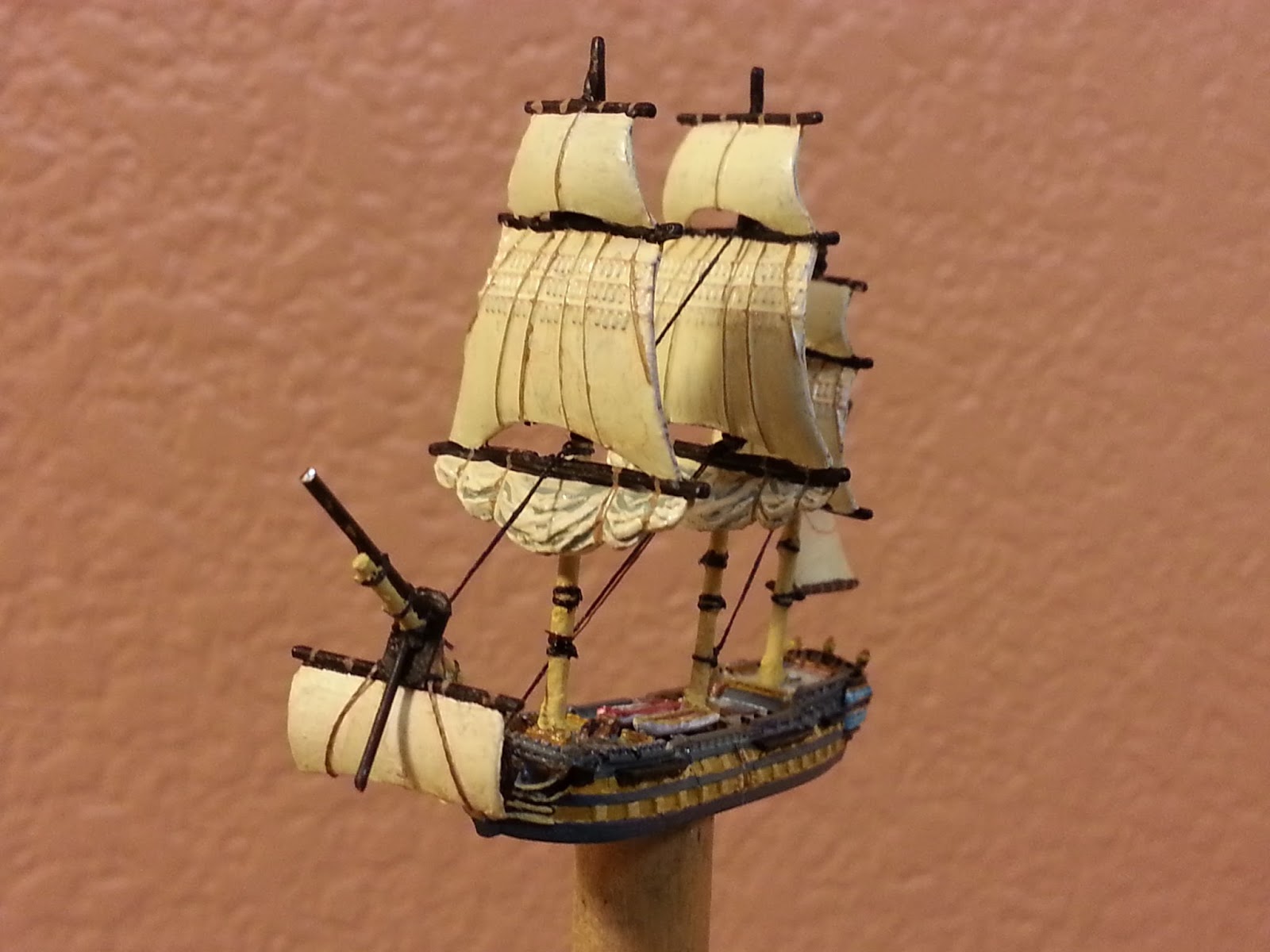 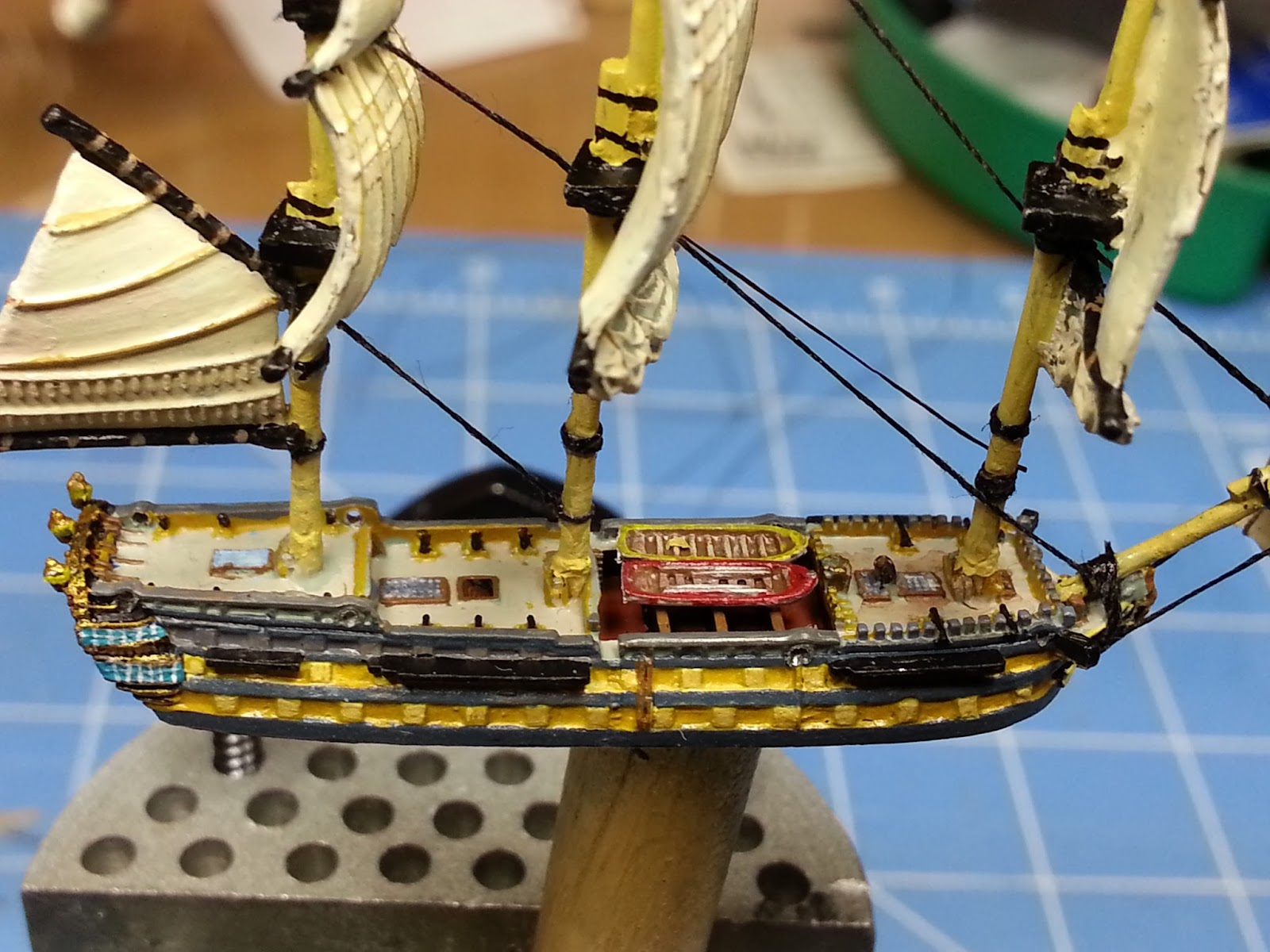 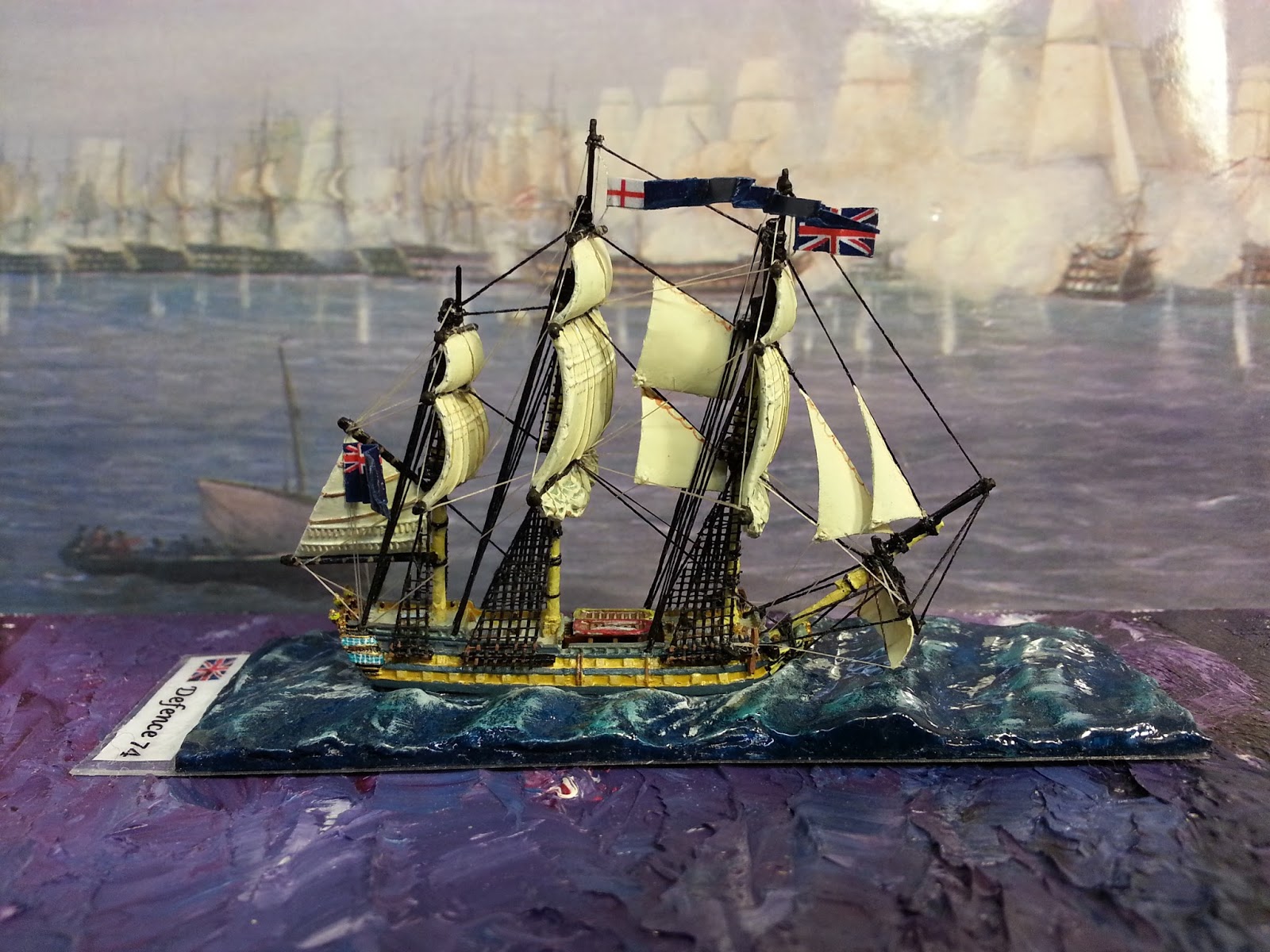 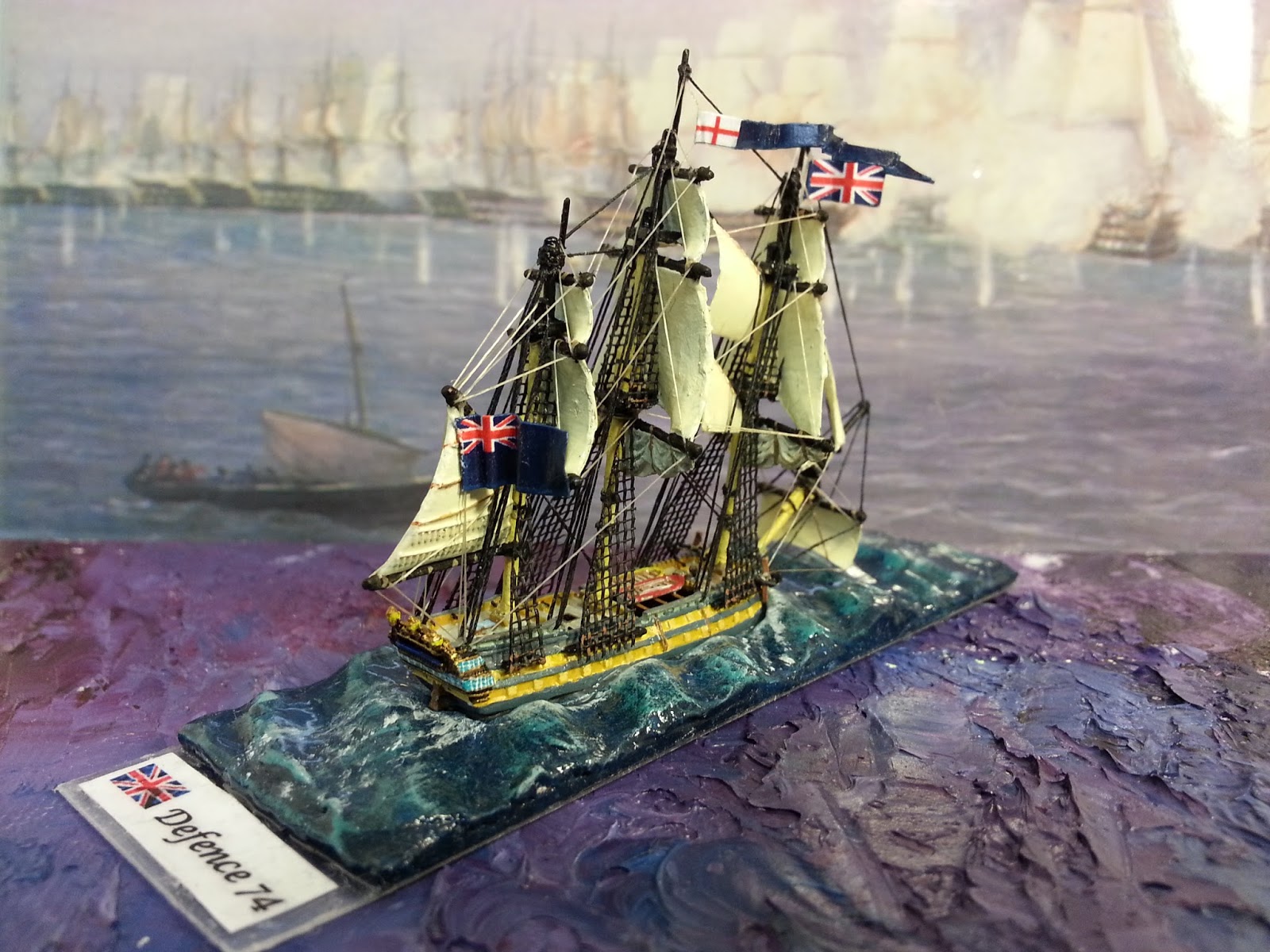 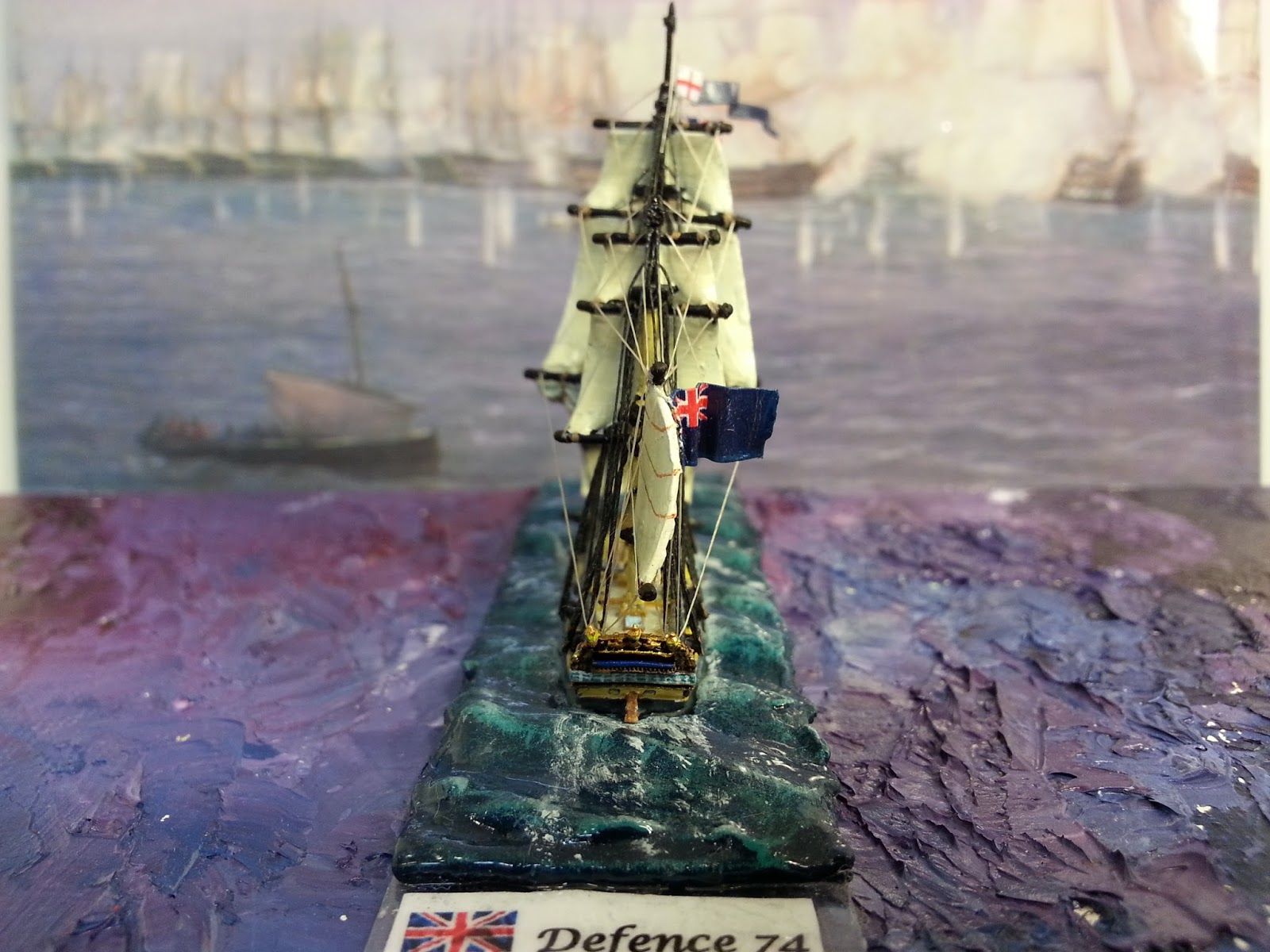 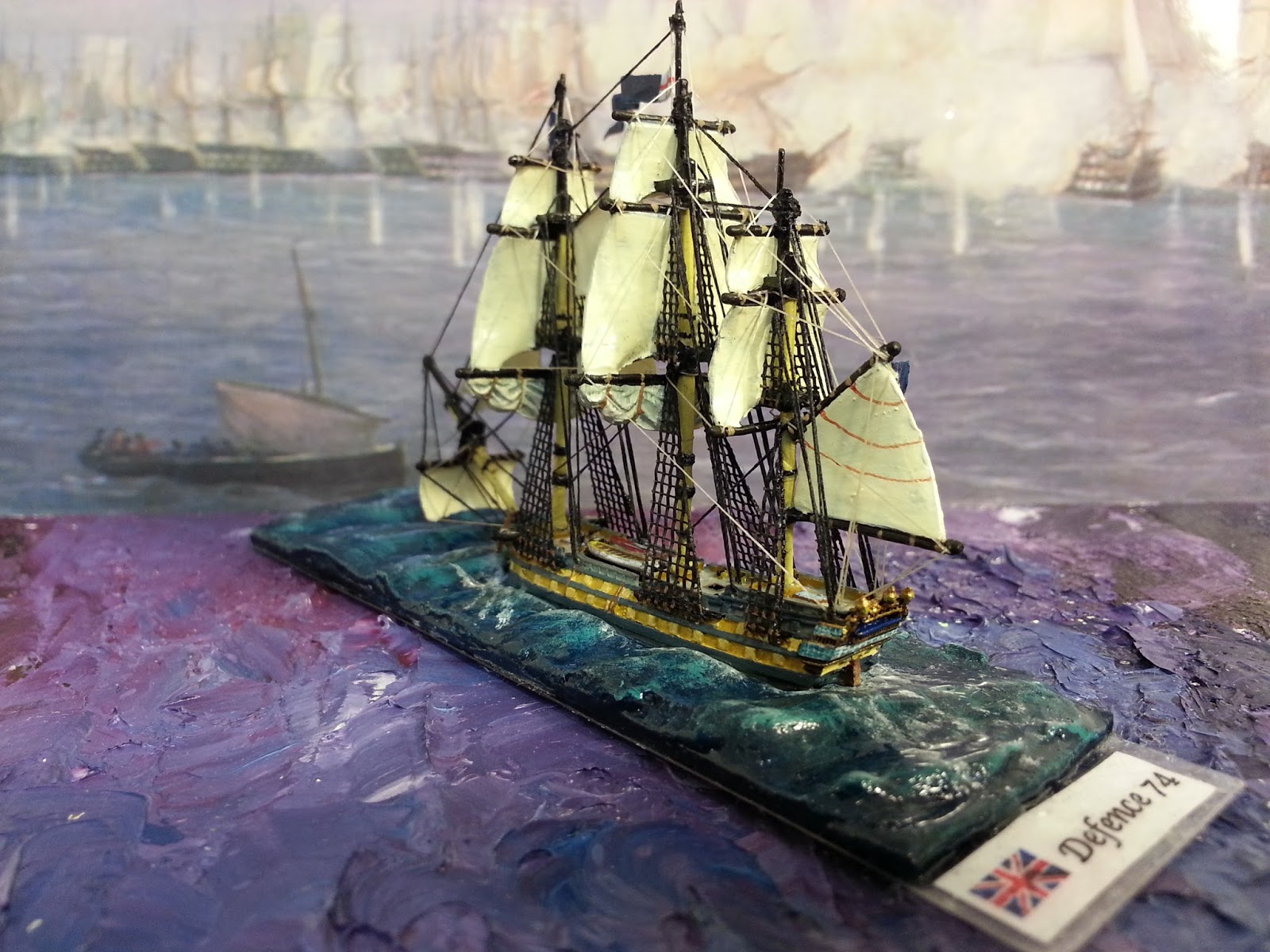 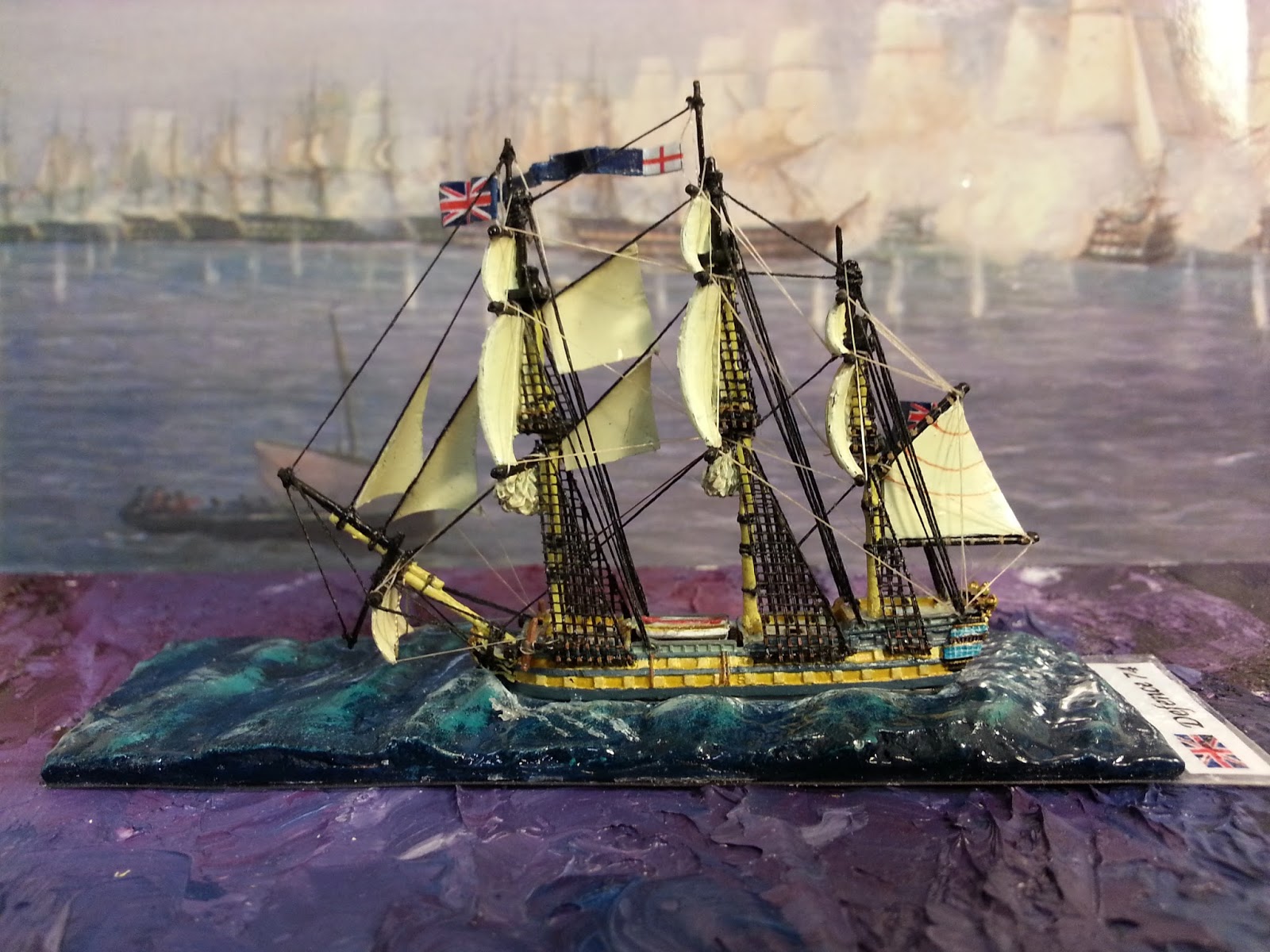 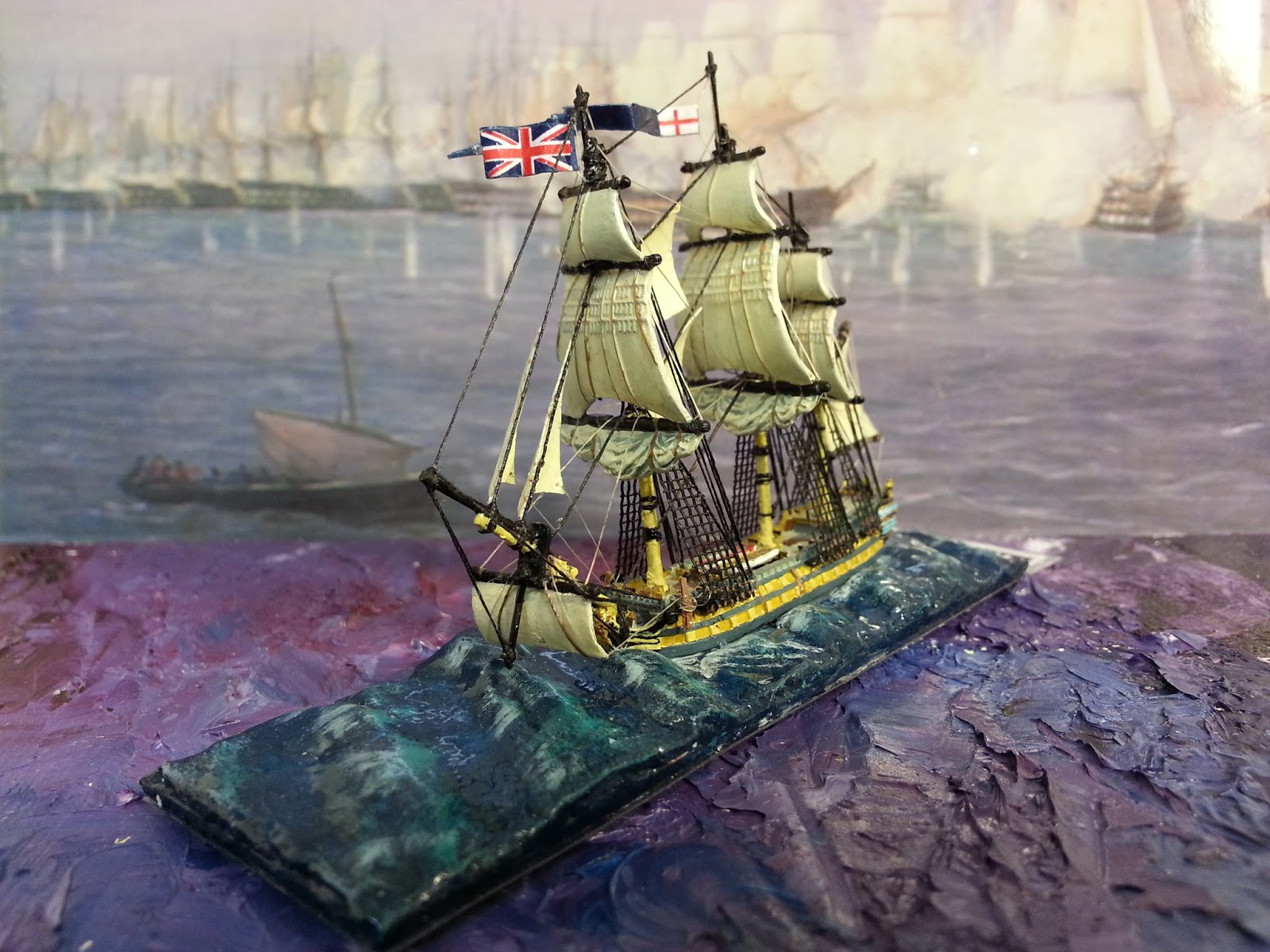 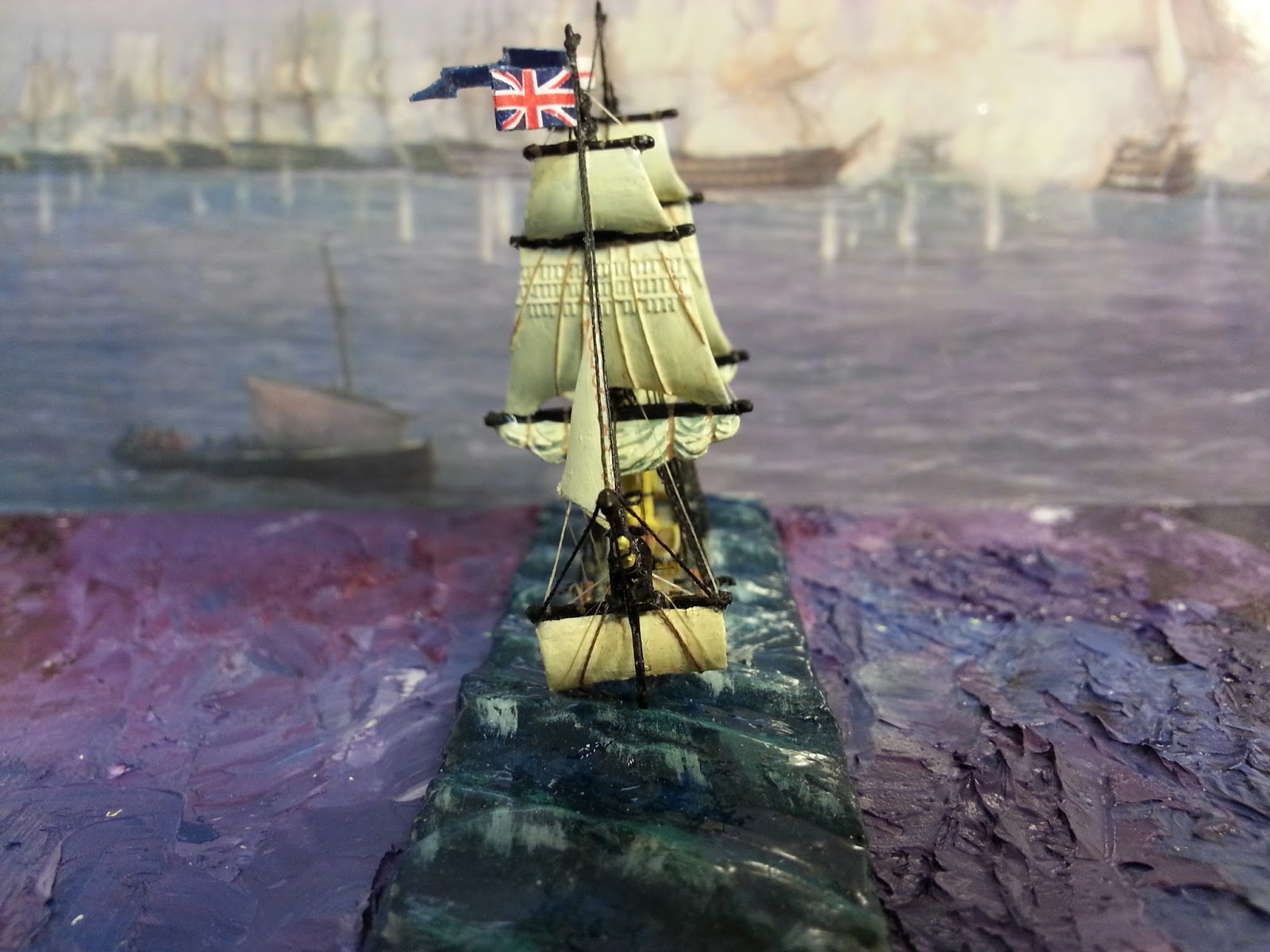 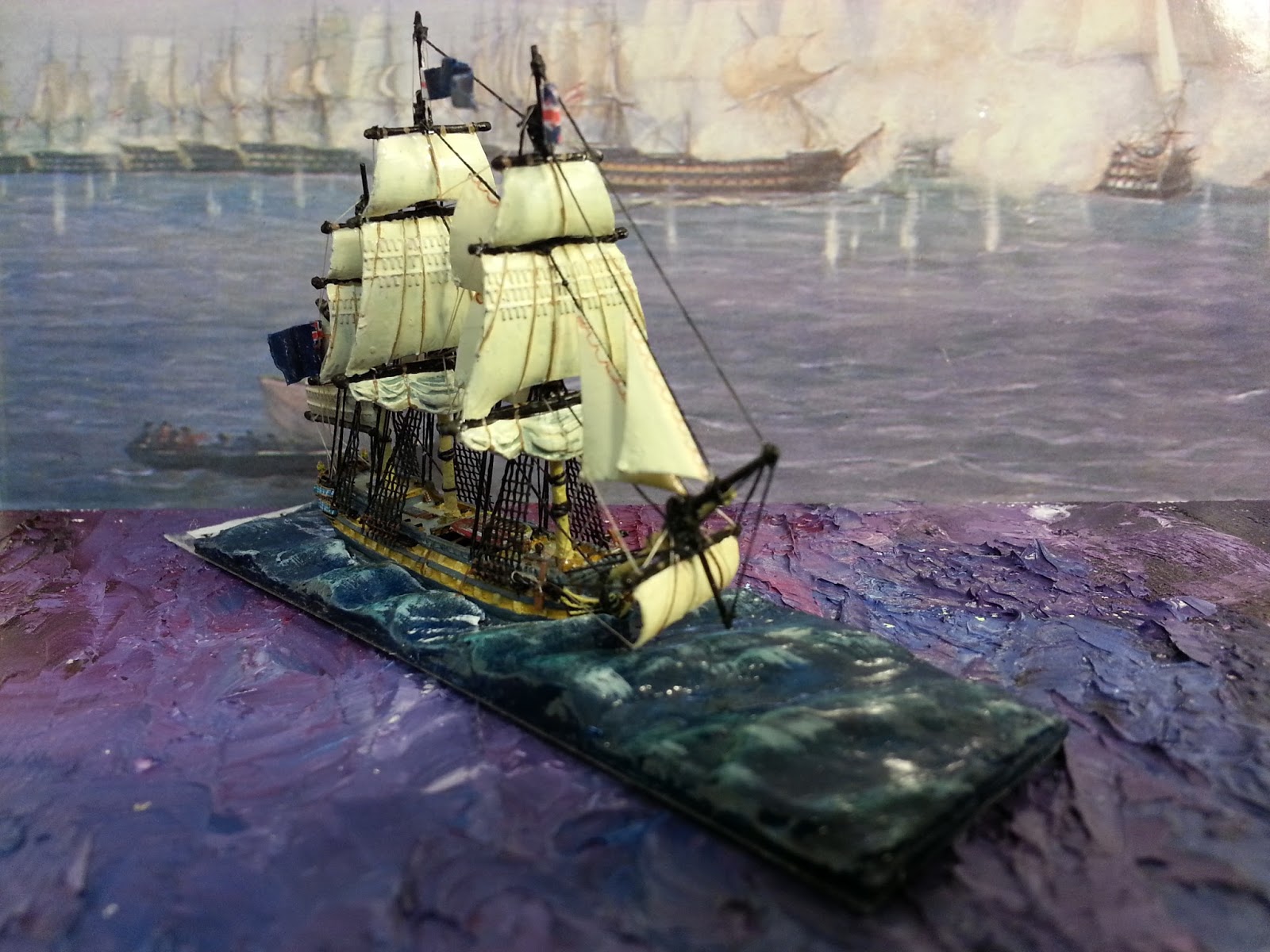 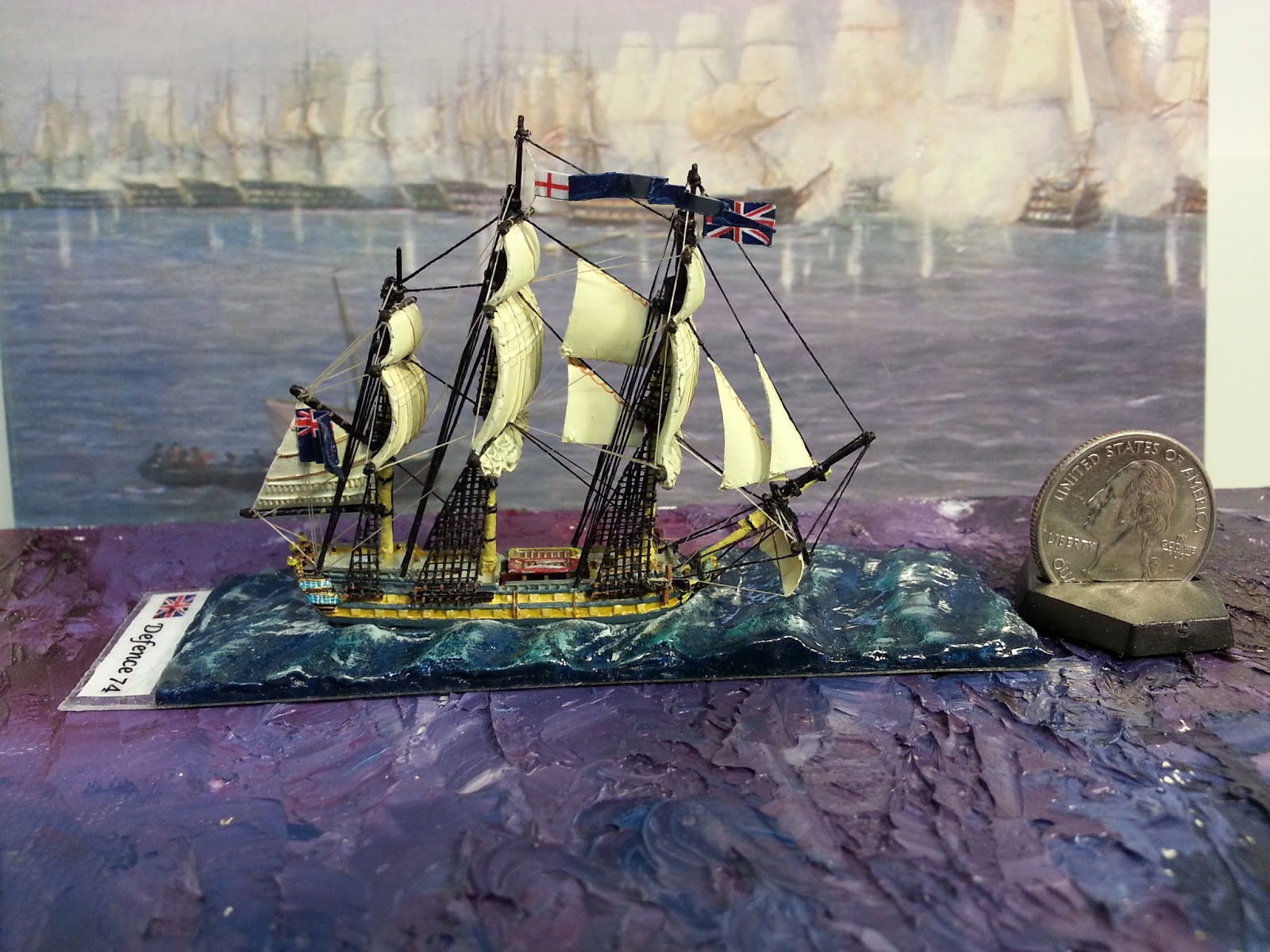 Posted by A Miniatures Hobby Room at 6:04 PM